Move over Li’l Wayne and Justin Timberlake and make room at the mic for Sajjad Ali and Shahzad Roy. These are just a few of the must-see pop stars featured on MTV Pakistan, a television music channel that has been rocking its way through the conservative culture of an Islamic country.…Read More 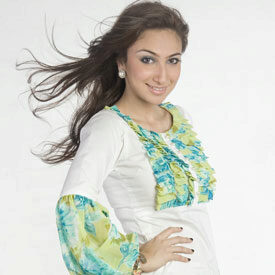 Anoushey Ashraf loves the British rockband Coldplay and English singer-songwriter Dido. But during her day job, Ashraf will likely be jamming out to the beat of a band, Sahil, and introducing videos from Sajjad Ali. She prefers leftover nihaari (a spicy stew) to cold pizza and is a fan of the show “Chai Garam,” a medley of pop, rock and bhangra, a spirited folk dance.

Such is the life of a video jockey in Pakistan. Ashraf was one of six stylish young VJs to hit the airwaves of MTV Pakistan, which made its debut in late 2006 as an experiment in the uncertain environment of an Islamic country. Her popularity has since soared and she is now a full-time TV host with programs targeted at youth. She juggles her MTV Pakistan assignments with a game show called Bingo on ARY Networks, another big TV network in the country. And she says she is currently in talks with Indus TV to host a weekend brunch show targeted at young people.

Pakistan, the second largest South Asian country after India, is a deeply conservative Islamic nation with more than a 98% Muslim population. Trendy fashion and music, especially for women, are not necessarily part of the culture – and often even forbidden.

Even so, the country’s 24-hour MTV channel has attracted Pakistani youth, offering them a mix of western music, Pakistani pop and music from Bollywood, India’s film equivalent to Hollywood, says Anuj Poddar, senior vice president of corporate strategy and business development at Viacom Media 18 Pvt. Ltd. in Mumbai, which launched  MTV’s Asian operations. Oh, and have you heard of “American Idol?” Well, MTV Pakistan has since 2008 covered the drama of young singing contestants on “Pakistan Sangeet Icon,” a reality show in search of Pakistan’s next great singing talent.

Ashraf says much of “what is projected outside” about her country is not true. Many people, even women wearing burqas, the traditional Islamic clothing that covers the entire head and body, have proven to be fans. Ashraf says she may appeal to Pakistan’s traditional communities because she speaks in Urdu, the local language, and avoids crossing boundaries, especially with the clothes she wears. “As long as you don’t get excessively daring like wearing a miniskirt or something backless or strapless, they are okay,” she says. She mostly wears jeans and skirts for her hour-long show, which appears three times a week.

MTV Pakistan has turned out to be a “huge success,” says Poddar. He says it reaches 80% to 90% of the country’s four to five million homes hooked to cable and satellite broadcasting. Revenues, the income that the company gets from its business activities, is “in the millions of dollars,” he adds.

MTV’s success in Pakistan prompted it to launch MTV Arabiya in the Middle East in November 2007, says Poddar. Poddar feels MTV Pakistan’s strategy to strike the right chord with the country’s youth market served it well. For starters, it found a local partner in leading cable TV broadcaster Indus TV Networks that helped it find its ways through the rules and regulations of the market, he says. MTV then focused on spotting and growing local talent.

“We have very good music here in Pakistan that did not have a window; MTV gave us that opportunity,” says Ashraf, who calls herself just another regular Pakistani girl in her early 20s who scored an awesome job after graduating from Pakistan’s Karachi University with a degree in English literature. Local pop makes up some 60% of MTV Pakistan’s music, while music popular in Western cultures, like the U.S., and Bollywood film music make up the rest. Serving them up are locally groomed VJs like Anoushey, Syra, Madiha and Ahmed Zeb.

“[The youth] are hungry to put their own stamp, to be heard in their own,” says Nelson Gayton, executive director and lecturer at the UCLA Andersen School of Management’s Center for Management of Enterprise in Media, Entertainment & Sports.  “MTV is very good at identifying what works in this rather fickle market,” he says. “It’s very difficult to get brand loyalty with the youth — they are less objective and more emotional. MTV has cultivated that by giving the youth a platform and power over its brand.”

MTV in Pakistan is always aware that it may be seen “as a sign of western cultural imperialism,” and is sensitive about not doing anything to offend the country’s political or religious establishments, says Poddar.

MTV Pakistan has inspired a half-dozen smaller rival music channels, says Poddar. It has to constantly think of creative ways to stay ahead, like the MTV Pakistan awards and “Sangeet Icon.” MTV Pakistan is planning more reality shows and other non-music entertainment.

What’s the best thing about being an MTV host? Ashraf says: “It’s great exposure, tons of fun and hey, it’s MTV. For any VJ, it’s the best it can get.”

Jennifer Barrett of Acorns with 5 Facts about Fintech