Samuel Ching is a teen entrepreneur from Singapore, a country in Southeast Asia. While many of his friends are choosing secure professional careers like accounting and law, Ching plans to stay the entrepreneurial course, finding ways to tackle the world’s most pressing issues through business. In this essay, Ching shares lessons from his entrepreneurial journey thus far. …Read More 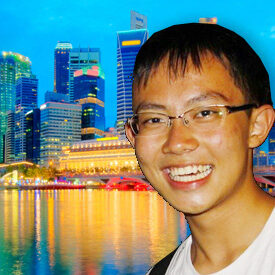 Samuel Ching, 16, is a high school junior at Raffles Institution in Bishan, Singapore, and president of the Raffles Entrepreneurs’ Network, which encourages its members to embrace the spirit of enterprise. In the following essay, Ching shares his insights on entrepreneurship, from selling erasers at age 9 to his current venture helping to provide disaster relief to developing countries.

“The fun [of being an entrepreneur] lies in the unknown. You wake up in the morning and don’t know what is going to happen during the day,” stated a panelist from the recent Start-Up@Singapore competition for young entrepreneurs proclaimed. Sitting there with a friend, I was taken with the speaker’s honesty. I had heard this message of uncertainty in entrepreneurship, but never related so directly. Young entrepreneurs in Singapore find the risky nature of entrepreneurship intriguing.

This risk factor can also be a deterrent. Singapore’s Gross Domestic Product [the total market value of goods and services produced by a nation] has grown at an exponential rate for the past few decades. This, coupled with good governance, has propelled Singapore from a third-world to a first-world country. The average income of Singaporeans is now among the world’s highest. In order to maintain this high standard of living, Singaporeans prioritize job security and material comforts above all else. This mindset is then passed down to my generation, where most parents desire their children to work hard, get a college degree and settle down into a secure (and high paying) job, such as accounting or law. This has resulted in a dearth of homegrown teenage entrepreneurs.

My story would have been the same as many of my friends, if not for supportive parents and lessons that changed the way I looked at business and entrepreneurship. Here are three key takeaways from my journey thus far.

Anyone can be an entrepreneur:

My love for business started when I was just 9. I remember my first business transaction with great fondness. There was a craze for erasers with pictures of country flags on them. Everyone in my class was scrambling to buy them from the school bookshop, which was selling them for 50¢ a piece. I begged my mum for extra pocket money to get the erasers. Agreeing, she bought them from a retail bookstore, mentioning in passing that each eraser cost only 10¢ per piece when bought in a box. Something clicked and I realized that I could sell the duplicates that I had for 40¢, effectively getting an extra 30¢ additional pocket money. I was right. My classmates lapped it up and bought out what I had to offer. I made $6 from those sales, which was big money to me at that time. From then on, I dabbled in more small ventures to increase my pocket money.

Whatever your business venture, stay on the right side of the law:

When I was 14, my classmates at Raffles Institution were growing into young men and needed food all the time. They often grumbled during class that break was too far away. Seeing this, I decided to buy small snacks (Pringles, M&Ms, etc.) directly from wholesalers and sell them to my classmates. It was a profitable business until I realized that consumption of food in the classroom was against school rules. The teachers promptly told me to stop providing this service. Every time I hear of someone caught for insider trading or a similar business-related offense, I can’t help but reflect on the importance of staying legal, no matter how profitable the business.

Business is all about making money…. or is it?

My initial brush with entrepreneurship has kept me focused on the bottom line. ‘Make profits, not losses’ was my mantra. This perception changed when I attended a two-day bootcamp on social entrepreneurship organized by the National University of Singapore and Grameen Creative Lab (a subsidiary of the Grameen group of companies). There, I heard a speech by Hans Reitz, right hand man to Nobel Laureate Muhammad Yunus, the founder of Grameen Bank who earned the name “banker to the poor” for his work providing microloans to people in Bangladesh. Reitz spoke about the need for social enterprises in today’s world, where ‘traditional’ businesses have perpetuated or even exacerbated the problem of the rich-poor divide. I began to see a whole new world of possibility, where business could be used to tackle [our] most pressing issues. I am currently pursuing this path, raising funds and creating awareness for Mercy Relief, a local humanitarian NGO [non-governmental organization] that does disaster relief and reconstruction projects in developing countries. I’m also part of a team that is developing a sustainable business model to empower Bhutanese children through art.

I have learned much from entrepreneurship thus far. Yet, this is only the beginning. During a networking session, a businessperson reminded me that “being an entrepreneur is very much like running a marathon. It is not a sprint, but a long journey where you will have to carefully pace yourself. And even when you hit the wall, you can slow down but you should never, ever stop moving.”

3 comments on “Perspectives on Entrepreneurship from a Student in Singapore”