Sometimes even Swifties need to take the good with the bad. On August 18, fans tuned in for Taylor Swift's much-anticipated Yahoo Worldwide Live Stream. The next day, cosmetics company Elizabeth Arden blamed its worst quarterly financial results ever on slow sales of celebrity perfumes, especially scents endorsed by Taylor Swift and Justin Bieber. It's a reminder that behind every brand is a business working hard to be profitable, and celebrity endorsements can influence success.…Read More 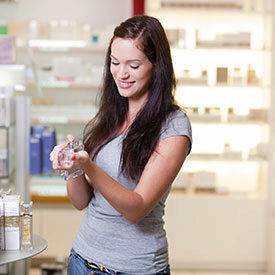 For Swifties and Beliebers, this Tuesday’s news report was nothing short of blasphemous. Global cosmetics company Elizabeth Arden announced that fourth quarter sales had fallen by more than 28% in the quarter ending June 30 – thus resulting in the company’s biggest quarterly loss in its history. But that wasn’t the harshest reality for lots of pop star fans out there. Elizabeth Arden blamed its losses on a downturn in the demand for the celebrity perfumes that it sells, particularly scents endorsed by Taylor Swift and Justin Bieber. “While the company had expected weaker sales comparisons due to the lower level of fragrance launch activity in fiscal 2014 versus fiscal 2013, the decline in sales of celebrity fragrances, particularly the Justin Bieber and Taylor Swift fragrances, was steeper than anticipated,” the company said in a statement.

Wonderstruck at a Live Stream

High school freshman Shannon Gribbins, of Titusville, N.J., wasn’t about to let a corporate earnings report ruin her week. Gribbins, a true Swiftie, was still excited over an evening spent with Taylor during the Yahoo Worldwide Live Stream that began at 5 p.m. on Monday, August 18. Gribbins put on her Taylor Swift t-shirt and spritzed on some of Taylor’s own “Wonderstruck” perfume that she got last Christmas, in preparation to watch the stream from her home and tweet in her questions.

Gribbins’ analysis of the waning celebrity perfume market? She can’t fathom why sales of celeb scents are down, but she has a few things to say about why she bought a Taylor fragrance. “I wanted to get ‘Wonderstruck’ because it smells really, really good. Also, I wanted to support Taylor because she is my favorite singer.” And yes, she can feel a little bit like her favorite celeb when she sprays on her scent in the morning – or while she’s watching a live stream.

Gribbins, like most fans who buy celebrity stuff, admits to not really thinking about the big businesses out there that rely upon celebrity products and endorsements to bring in sales. For example, as a result of this drop in celebrity perfume demand, Elizabeth Arden expects weak sales for the next six months, which caused its shares trading on Wall Street to plunge more than 20% earlier in the week. Overall, the company stock has lost more than 40% of its value this year. It’s not great business when sales are lagging.

While speculation abounds as to why fewer people are buying celebrity perfumes right now (maybe Justin Bieber’s recent negative press was a factor?), the truth is that a celebrity connection especially in retail is quite powerful. In keeping with Elizabeth Arden’s earnings news, here are a few other business stories that illustrate how celebrity endorsements can influence corporate success:

Taylor Swift fan, Gribbins, would no doubt agree with that motivation. As for how Swift herself might respond to Elizabeth Arden’s claim that a drop in Taylor Swift perfume sales is in part to blame for the downturn in its business? When she announced her new single “Shake It Off” during her live stream on Monday night, Swift said, “People can say whatever they want about us at any time. We cannot control that. The only thing we can control is our reaction to it. You can either let it get to you…or…you just shake it off.”

Using the links below, research celebrity endorsements that have either succeeded or failed. Which one do you find most interesting? Why? What did you learn about the way business operates?

Have you ever bought a celebrity perfume? What are some of the business implications of the expression “celebrity sells?” What are the dangers of a company being so closely aligned to a celebrity face or brand?

In the umbrella example mentioned in this article, Rihanna did not just want to lend her name to the company for endorsement, but also wanted a customized line. Why do you think she negotiated this kind of deal with Totes Isotoner? What does that say about her development and promotion of her own brand?