The Girl with the High IQ

What’s in a number? If you believe Mensa, numbers can indicate genius. Neha Ramu, 13, recently topped great thinkers like Albert Einstein and Stephen Hawking in an IQ test. She sat down with KWHS to talk about her many interests and the career track she plans to pursue. Ramu’s love of learning ultimately defines her.…Read More 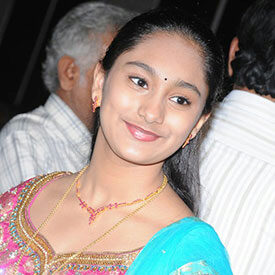 Neha Ramu, 13, is like any other girl her age: She loves friends, movies and Harry Potter. Lately, however, Ramu — a native of Bangalore, India, who now lives in London — has risen to celebrity status, at least in intellectual circles. She recently achieved the highest possible IQ (Intelligence Quotient) score — 162 — for people under 18 in the Mensa Test run by Mensa International, a society of people with high IQs. British newspapers gushed that she had trumped theoretical physicists Albert Einstein and Stephen Hawking, who are thought to have IQs of 160 (an average IQ score is between 85 and 114; 144 or above is considered genius-level).

What does someone who has been elevated to genius status do first? Read a biography of Albert Einstein, of course. “He changed the world with his theories,” says Ramu, a student at Tiffin Girls’ School in Kinston upon Thames. “I never thought about being smarter than Einstein; I know I am not.”

She is, however, above average – and ambitious. This year, Ramu scored a 740 out of 800 on the math SAT, the standardized test for college admissions in the U.S. That won her a seat in the “Study of Exceptional Talent” program offered by the Center for Talented Youth (CTY) at Johns Hopkins University in Baltimore, Md. She has been a CTY member for a few years and attended a three-week summer course in Baltimore last year on “Sensation and Perception.” She has completed several Johns Hopkins online courses in math and science.

Curing Cancer and The Hunger Games

Last summer’s Johns Hopkins course led to other, longer-term plans. Ramu now wants to be a neuroscientist — a specialist who studies the structure and function of the brain and nervous system. That is a change from what she had originally planned for a career. “I had always thought I would find a cure for cancer, but now I may try to find cures for other brain-related diseases,” notes Ramu.

Ramu says that her parents, who are ophthalmologists, have inspired her. “They are both extremely hard working,” she says. “They sometimes miss their dinner because they are too engrossed in their work. My dad came from India [to the United Kingdom in 2007], worked hard and within a year or so made a very comfortable life for me and my mum.”

Life for Ramu is not all brain analytics and IQ scores. She also spends time reading, watching TV and swimming. Recent titles added to her bookshelf are The Alchemist, by Paulo Coelho, and The Hunger Games trilogy by Suzanne Collins. In addition, she has also started to learn about space and astronomy, thanks to an online Johns Hopkins course she is taking on earth and space sciences. She plans to join the Army Cadet Force, a British youth organization that focuses on military and adventure-based training. And now that she is 13, she is designing her first Facebook profile. Friends, not test scores, will keep her grounded, says Ramu. “My friends began treating me like I knew everything in the world” after the Mensa news hit the papers, she says. “Eventually, they realized the achievement hasn’t changed me.”

How do you feel about so much emphasis being placed on an IQ test score? Do you think this number defines Neha Ramu as a genius? Or is it something else?

It is never too early to begin exploring your interests. Have you taken courses or participated in programs that helped guide your potential career choices? Describe your experiences.

Have you ever achieved something that changed the way your friends perceived you? How did they respond and how did you handle it? What did you learn from the experience?

4 comments on “The Girl with the High IQ”