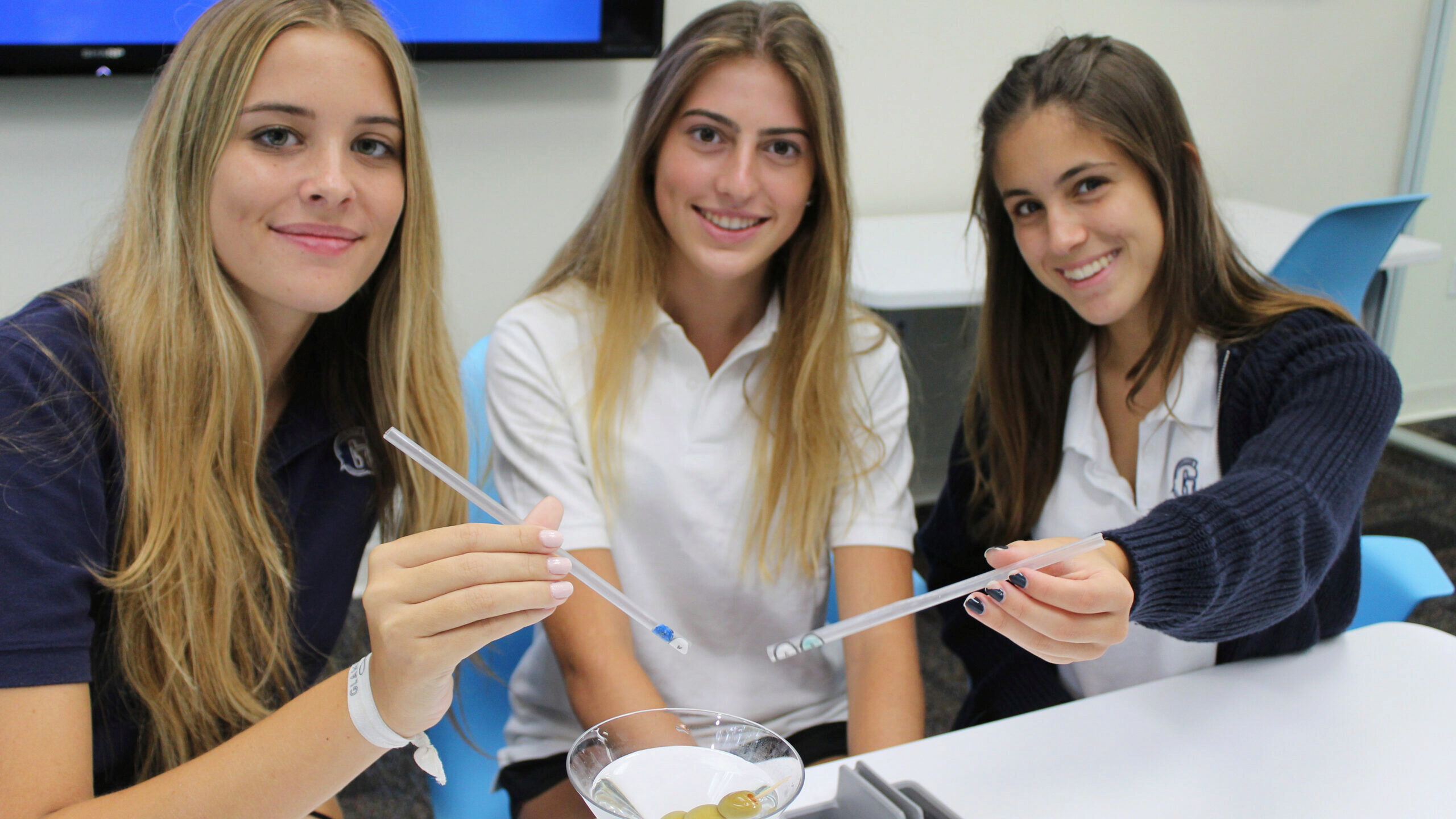 Most 17-year-olds schedule productive summer plans in between occasional beach trips – like working part-time jobs, exploring internships, taking summer-school classes and campus visits, and maybe even attending college summer programs. Fewer teens, however, are meeting with potential manufacturers and flying out to North Carolina to consider collaborating with an agency on a new Kickstarter campaign. This is the reality for Carolina Baigorri and Susana Cappello, both rising high school seniors at Gulliver Schools in Pinecrest, Florida, and their friend Victoria Roca, a recent Gulliver grad who is heading to Babson College this fall.

Baigorri, Cappello and Roca are the founders of Wary LLC, a start-up company that invented the Smart Straw, a patent-pending straw that detects the most common date-rape drugs, GHB and Ketamine, found in alcoholic and non-alcoholic drinks. The straw, which they plan to market under the ‘Smart Straws’ trademark, includes two chemical test strips at the end that turn navy blue if they come into contact with substances that are often used for drug-facilitated sexual assault.

A Pendant and Perseverance

Life for these three young women has been nothing short of a whirlwind since a school-based project launched them into the national spotlight this May.

It all began inside their high school business program in the fall of 2016, where as students in an entrepreneurship class, they were asked to get together with a group, identify a problem in society, and come up with an idea to solve it. As three of the only girls in the class, Baigorri, Cappello and Roca decided to form a team and get to work.

They conceived their idea through research and personal insight. “My sister is a rising junior at Northwestern University,” says Cappello, who along with her teammates lives in Miami, Florida. “In 2016 when we began the project, my parents were receiving emails from the school that there were cases of sexual assault involving drugs and alcohol on campus. We thought, ‘There needs to be a product for this problem.’”

Adds Baigorri: “We began researching the statistics, and they’re very high. One in every five college students is drugged or sexually assaulted. Very surprising. We felt that we could help so many people by creating a product to save them from potentially being drugged.”

And so, team Smart Straws was born – but not without some fits and starts. The three women first began developing a plan around the concept of a jewelry pendant that when dipped in drinks would change color when it detected date-rape drugs,. But teachers in Gulliver Prep’s biomedical department advised that the product wasn’t viable. They started over, and pivoted (pivot) to the Smart Straw idea.

The process, they stress, had its challenges. Baigorri, Cappello and Roca moved ahead with revising the business plan, but struggled organizationally to pitch their idea successfully during class (they admit this was in part because they weren’t as prepared for some of their pitches as they could be). Ultimately, they received a “C” on the entrepreneurship project. “Initially within our school community, we did not have support,” says Cappello. “Many of our classmates felt our problem wasn’t relevant compared to the other groups. We weren’t given the opportunity to participate in our school’s business showcase.”

Rather than give up, however, the team persevered under the guiding hand of their parents, in particular Susana’s dad, Juan Pablo Cappello, a seasoned Miami lawyer and entrepreneur who co-founded Ideame, a capital crowd-sourcing firm based out of several Latin American countries, and who was a partner in Patagon.com, which was sold in 2000 to Banco Santander for more than $500 million U.S. dollars. The senior Cappello has been the team’s greatest champion and mentor. “I have told the girls from the beginning to let go of expectations, to not focus on success and instead focus on the process,” notes Juan Pablo. “First, think of a big problem. Second, think of a simple solution that you can implement. Third, don’t let anyone or anything stop you from actually bringing the solution to market. When they received a “C” in their business class for the Smart Straw idea, I told them to just keep pushing.”

And push they did. Earlier this year, team Smart Straws decided to enter the 19th annual Miami Herald Business Plan Challenge. They submitted a three-page business plan that was evaluated by community executives, investors, entrepreneurs and academics. And out of nearly 100 high school team entries, Smart Straws won. Soon after, in May, they became media darlings, with feature articles in Forbes, the Daily Mail and even a video about the frightening statistics around sexual assault that has received 14 million views. “One morning we woke up and there was a story about us on Snapchat,” recalls Susana Cappello. “That was really cool.”

Even cooler, she says, was their recent experience signing a non-disclosure agreement with a manufacturer (a confidential legal agreement between two parties) to build the first Smart Straw prototype. They inked the deal with a vice president of operations who had ignored their emails until they won the Miami Herald contest. Soon after, he called a meeting with the team. “We hope to have a product to show by this fall,” says Cappello.

“We want to release a product as soon as possible,” adds Baigorri, who points out that a group of college students who developed nail polish to detect date-rape drugs in 2014 has yet to bring a product to market. “None of our competitors has released a product yet. We want to have the competitive advantage.” A Kickstarter campaign to raise money for Wary LLC will launch around August, though the team hasn’t yet selected an agency to help them design and implement the online crowd-sourcing strategy.

Wary LLC is still very much in the start-up phase, which means that it has potential to either succeed or fail, depending on factors like how much funding the team can raise, how well the product works, and whether the market will actually embrace it. Juan Pablo, for one, is hopeful. “Just the concept of the Smart Straw has already raised the awareness of the major problem of sexual assault,” he says. “Once the Smart Straw goes to market, the ensuing media coverage will be even more impactful than the product itself. Change is most powerful when people change the way they think.” He adds, “Don’t ever let a “C” slow you down.”

Baigorri, Cappello and Roca, who all plan to study business in college, agree that persistence is the most powerful takeaway from their Smart Straw journey. “We’re focused on making an impact with our product,” they say. “And we’re excited for what is yet to come.”

What are three entrepreneurship lessons that you take away from the Smart Straw story?

Why do you think the Smart Straw idea won the Miami Herald competition and has been covered by high-profile media outlets? What is so compelling about the concept and their story?

Did you know about the problem of drug-facilitated sexual assault before reading this article? Did you know that it was a serious issue on college campuses? Did the story of Wary LLC inform your thinking on this topic at all?

Do you have questions or feedback for Carolina Baigorri, Susana Cappello and Victoria Roca? Let them know in the comments section of this article! They may even respond.

The Power of Curiosity