Carlos Rodriguez Flores always wanted to be in the center of the business and economics action – so why not try to get an internship at the almighty Google? His plan succeeded, and now he is working at the Googleplex in Silicon Valley full-time. Flores shares insights from his internship and employment journey.…Read More 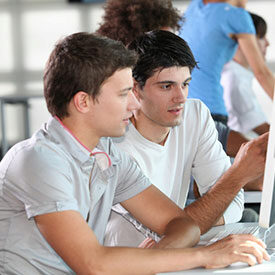 Carlos Rodriguez Flores never really thought he had a chance at landing an internship at Google, the Mountain View, Calif.-based multinational company (located inside the Silicon Valley tech hub) that provides Internet-related products and services, including Internet search, cloud computing, software and advertising technologies. But still, during his junior year at the University of Pennsylvania, he decided to give it a shot. “I knew if I didn’t try … I would completely regret it later,” he says.

That was two years ago. Since then, Flores, 22, has completed a summer internship at Google and has also started working for the company full-time at the Googleplex headquarters — a dream come true for someone who has known since he was a teenager that he wanted to be a part of the world of business and economics.

Flores grew up moving around the world — from Mexico to Argentina to Venezuela — because of his father’s job with Procter & Gamble, a consumer goods company. As a high school student at the American International School in Caracas, Venezuela, he applied to business programs at Penn and the London School of Economics. He decided to go to Wharton, and it was there, at an information session during his freshman year, that the Google seed was planted. “It was the first time I heard of the RAMP program, a [Google] program designed to develop the future executives of technology, which sounded awesome and completely different from the banking and consulting positions many people consider post-graduation,” he says.

Two years later, during his junior year, he decided to apply for a summer internship position – even though he knew that the application process was “extremely competitive.” He had two rounds of interviews, the first over the phone and the second in person. The experience was a little different from the traditional interview process. “What separates Google interviews from other interviews I had is the fact that they focus a lot more on the personality of the interviewee, as well as your critical thinking,” says Flores. “I did get a couple of the unusual interview questions you read about, but I think the toughest ones are the ones about yourself.”

Many of the questions also required Flores to call on his business knowledge. Here’s an example: “Imagine you are tasked to design an online marketing campaign for a florist. Please walk me through your process. (Follow-up questions: As you design the campaign, what factors would you take into consideration? How would you go about estimating the total market size? Considering the total market, how would you go about increasing your market share [by 5% over the next year]?)”

All went well, and Flores was offered an internship at Google’s headquarters in Mountain View. He was working in the marketing department as a member of the small business global team for AdWords, Google’s main advertising product and biggest source of revenue. The internship — for which he was paid a competitive salary — lasted 11 weeks over the summer. “My big project was to help develop a guide for SMBs [small- and medium-sized businesses] on the importance of having an online presence, how to manage it and the keys to success,” Flores says. “Each day was very different from the previous. As you spend more time at the company, a lot of side projects are added to your grand project.” In Flores’ case, one of those side projects was helping to support Google’s Get Your Business Online campaign, which aims to make it easy, free and fast for small companies to build their own websites.

The work wasn’t easy, but Flores tackled it with intern-like enthusiasm. “At the beginning, the project you are assigned sounds impossible,” he says, “But then you learn at Google that nothing is impossible. They hired you for a reason, and they provide you with many resources to achieve the ambitious goals you set out for yourself. In the end, everything works out.”

When he wasn’t working, Flores networked and socialized. Google spends a lot of time and resources on its interns, Flores says. Among the perks: He was paired with a mentor who sat down with him every other week to talk about how his internship was going. His mentor would also give him advice about how to “expand his reach” within Google, and recommend fun things to do on the weekends in San Francisco. The company hosted social events for mentors and mentees so they could get to know each other away from the office.

Rubbing Elbows with Page and Brin

When the 11 weeks were up, Flores returned to Philadelphia to finish his senior year at Penn. Just a few months later, though, he got an offer for a full-time job with Google back at the headquarters. He was thrilled. In retrospect, he says, his summer internship with the company “was basically a three-month interview for a full-time role.”

Now Flores is back in Mountain View, taking the Google shuttle bus to work every day from his home in San Francisco and eating lunch at one of the more than 30 cafeterias on the Google campus.

Flores’ full-time title is associate product marketing manager for the SMB Americas team. In practice, he helps small- and mid-sized companies use Google’s AdWords program to boost their business online. “My job is ultimately to help SMBs …  make the web work for them,” he notes. “It is the best job I could have hoped for after graduation.”

He adds that he is thrilled to spend every day in the warm and collegial environment that he remembers from his summer internship. “Everyone at Google is extremely approachable, including the founders [Larry Page and Sergey Brin], who you see all the time running around the Google campus, riding bikes that are straight out of a sci-fi magazine and eating tofu next to you at lunch.

Tips from Flores about how to land a Google internship:

What is Google’s RAMP program?

What are SMBs and how did they relate to Carlos Rodriguez Flores’ internship at Google?

Based on Flores’ advice, why do you think he was hired at Google after college? Did his internship play a role?

7 comments on “Future Tech Exec: An Internship Leads to a Full-time Gig at Google”

Preparing Students for the Hard Reality of Post-college Debt