High school senior Hannah McCarley, the youngest delegate from West Virginia -- if not anywhere -- spent the past week at the Democratic National Convention in Charlotte, N.C. She talked with KWHS about democratic platforms, teen issues and helping her peers tap their political passions.…Read More 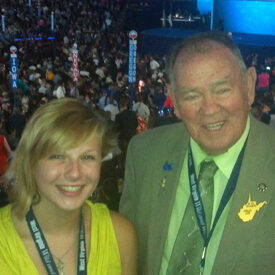 Monday, September 3, was a milestone for Hannah McCarley. Not only did she celebrate her 18th birthday that day (which means she can now officially vote in the presidential election in November), but she also kicked off one of the most exciting weeks of her teenage life – at the Democratic National Convention in Charlotte, N.C. McCarley, a senior at Washington High School in Charles Town, West Virginia, is a delegate, an elected position in which she represents the needs of voters in and around her hometown. McCarley, who, as the youngest West Virginia delegate posed for photos with former state Senator Shirley Love, the oldest West Virginia delegate, spoke with Knowledge@Wharton High School about the convention and her passion for politics.

Knowledge@Wharton High School: How did you become a delegate?

KWHS: What are your responsibilities as a delegate?

McCarley: The main job you have as a delegate is to place your vote to nominate the next presidential candidate to your party. We also go over the Democratic platform [a declaration of how Democrats plan to move America forward over the next four years] for our party. There’s the West Virginia platform for our party that we worked on at the state convention, and at the national convention [we worked on] the Democratic platform for the whole party. That gets [voted on] and passed as well.

McCarley: I’ve always participated in politics on a local level. We have local candidates who run for election. I campaigned during the last presidential election with my dad and I’m going to campaign for this one a bit, too. The Democratic National Convention was a way for me to do something on a national level.

KWHS: What were some of the week’s highlights?

McCarley: I enjoyed going to the meetings. I went to a youth council and a women’s caucus, [which addressed women’s issues]. Being able to meet all the other people from around the country and people who were my age, too, was amazing. At the youth council, we talked about [issues] that affect youth and how we can help to get out the vote.

KWHS: What are the hot button issues for today’s youth?

McCarley: [The main issue] is expanding the opportunity for people to go to college — making it easier and more accessible for people to have a higher education. It’s affecting a lot of people my age. It’s something you hear talked about and [you can relate to].

KWHS: Do you plan to go to college?

McCarley: I start my application process next week, but I don’t know where I’m going to end up. I plan to study psychology, visual arts and political science.

KWHS: Did any particular speakers at the convention energize you?

KWHS: Do you feel that your peers are interested in the presidential election or getting involved in politics?

McCarley: I think there is an interest in politics when you know that it is directly affecting you. Media needs to be more geared toward youth. A lot of media talks about youth, but it doesn’t talk to youth. I’m involved in politics, but people who are involved in other things need information that is more understandable. They need to be able to read something and understand the issues, rather than having to follow up on hours and hours of issues to get the full story. If information is made more accessible, then there will be more of an interest. Right now, it’s hard to follow what’s going on in politics with all the different arguments.

KWHS: What would you suggest to another teen who might be interested in getting into politics or following the issues?

McCarley: They need to find something that they are really passionate about and that they can get excited about. Then they need to follow the issue and what is being talked about. It helps to have something that’s driving you toward a goal. I am really interested in education reform, women’s health and arts and education. They excite me, so it’s a lot easier to find ways to expand on my interests. I got the opportunity to run to be a national delegate, but there are tons of things I could have done and that others can do on a local political level.

KWHS: What main lessons are you taking away from your week in Charlotte?

McCarley: I met and [talked with] a lot of delegates from around the country. [You realize] that there are different perspectives on some of the same issues. Depending on what part of the country you are from, you may be concerned about different things. The caucuses are also interesting. For instance, in addition to the women’s caucus, there’s a seniors caucus for senior citizens and retirees. There’s an LGBT [lesbian, gay, bisexual, transsexual] caucus and one for [war] veterans. You have so many opportunities to hear people speak on issues that cover a really broad spectrum.

KWHS: What does next week bring?

McCarley: I’ll be back in school catching up on some work.