Learning to Be Color Brave 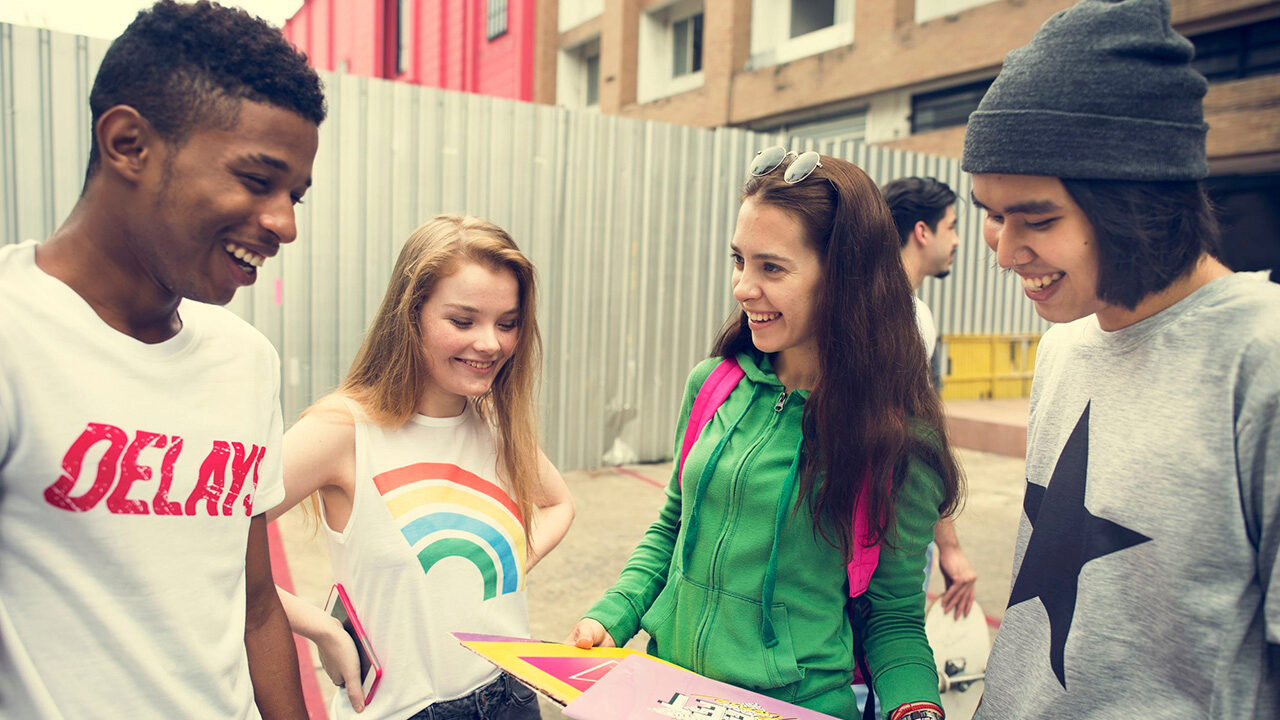 Grace and Victoria Reznikov, seniors at Lawrence High School in Lawrenceville, N.J., U.S., were excited a few years back when a Starbucks store with a drive-through window opened in their town. Picking up their favorite Caramel Macchiatos became that much more convenient.

Fast-forward a few years and that Starbucks service is still convenient, but the controversy regarding race that has emerged around the well-known coffee retailer is far less easy to grasp.

This latest widespread conversation on race – which refers to a person’s physical characteristics, such as skin color and hair — began with an incident. On April 12, 2018, two African-American men – Rashon Nelson and Donte Robinson, both 23 – were handcuffed and escorted out of a downtown Philadelphia Starbucks after a white manager called the police on them for hanging around without ordering anything. The video went viral on YouTube, an uproar over what many saw as racial profiling ensued, and Starbucks CEO Kevin Johnson condemned the actions of the Philadelphia store manager and apologized. Nelson and Robinson have since reached a legal settlement with Starbucks.

The unfolding of the Starbucks story opened the dialogue and discussion around the charged issue of racial bias, which is when you prejudge someone based on their race. Starbucks went so far as to close 8,000 of its stores last week to deliver anti-bias training to 175,000 employees. The training, wrote the New York Times, was “part social justice crash course and part self-reflection exercise” and was “at the core of a well-choreographed effort by Starbucks to improve its corporate image after a backlash over the arrests.”

While the Reznikov twins may not have been able to buy Caramel Macchiatos during the May 29 Starbucks shutdown, they did take a moment to reflect on why a company would sacrifice millions of dollars in coffee sales to address racial issues with its employees. “Coming from a culturally diverse high school, I think the Starbucks training is great,” said Victoria. “A lot of people lack social awareness and how their actions could offend someone.” Still, both sisters agreed that it is “really sad” that we have to be reminded in this day and age to be culturally aware.

Sad, but true. Actions like those of the Starbucks manager in Philadelphia often stem from what is known as unconscious bias. While many people believe in concepts like equal rights and the fair treatment of people, regardless of race, they are sometimes guided by deeper beliefs that they may not even know they have. It is those beliefs that can shape our personal and professional relations and interactions in terms of how we interpret other people’s actions, who we spend time with, how we engage within teams, and even who gets considered for certain career opportunities.

Everyone has unconscious biases that may be contradictory to what you consciously believe to be true, adds Haley Pilgrim, a sociology PhD student at the University of Pennsylvania who teaches at Penn’s summer Social Justice Research Academy for high school students.

“Because we live in a society that is consistently sending us implicit messages about different groups of people, these social stereotypes get ingrained within us,” notes Pilgrim, who attended MSNBC’s “Everyday Racism in America” event hosted in Philadelphia last week on the same day as the Starbucks training. “If you exist in a society historically structured to keep black people in a lower status, see the government pass policies with the implicit or explicit framing that black people are lazy, see media portrayals from news to films of black people as poor or criminal, have history courses that do not educate you on the effects of the legacy of slavery and Jim Crow [state and local laws that enforced racial segregation in the Southern U.S.], it will take active and intentional work to overcome your unconscious bias. It is walking down the street and seeing black people out to eat, thinking, “Why aren’t they at work?” and seeing a white pair, and not having that thought or thinking, “I bet they are doing business over drinks.” So in the work place, you may see two men producing the same quality of work and see one as lazy and not cut out for the job because they are black, and create a convenient explanation for why the white man isn’t performing well, because you subconsciously expect them to do better.”

Pilgrim adds that it is especially important to understand the role of unconscious bias when you occupy a place of privilege. “Part of your success may be a result of positive bias towards your group,” she notes. “You may have worked really hard, but what set you apart from your peer could have been unconscious bias from your supervisor. Acknowledging that your success results not only from working hard, but is also a part of your privilege, is how you can be an ally to the struggles of marginalized groups.”

‘We Cannot Afford to Be Color Blind’

This begins to tease out one of Starbucks’s key motivations for spending millions on company-wide anti-bias training, for which the company partnered with Perception Institute, an anti-bias research and advisory group. With input from sociologists and other experts, they developed a four-hour program to help employees understand, in part, what it means to be color brave as opposed to color blind. Often, that starts with getting in touch with how you view the world. “Understanding our own perceptions can help us to build more positive workplace relationships that will support not only our own growth and development, but that of our organizations as well,” says Creary.

Becoming more color brave is essential to recognizing your biases and overcoming them – and embracing diversity, which is an important success skill for the 21st century economy, whether you are employees, managers or top CEOs. Mellody Hobson Lucas, president of Ariel Investments and rock star to many for her grace, hard work and intellect (and wife of George Lucas, the guy who created Star Wars), delivered a 2014 TED Talk entitled “Color Blind or Color Brave?” (see Related Links). In it, she said, “If we truly believe in equal rights and equal opportunity in America, I think we have to have real conversations about this issue. We cannot afford to be color blind. We have to be color brave. We have to be willing, as teachers and parents and entrepreneurs and scientists, we have to be willing to have proactive conversations about race with honesty and understanding and courage, not because it’s the right thing to do, but because it’s the smart thing to do, because our businesses and our products and our science, our research, all of that will be better with greater diversity.”

To be color brave, says Pilgrim, is to acknowledge that “people of different races have disparate daily experiences, stressors and life opportunities because of how our society has been historically and is currently structured. Color blindness ignores the institutionalized nature of racism and the daily reality of racism in every facet from housing to medical care to interactions on the train. This is important because understanding the experiences of marginalized people helps you be a better ally to their struggle.” This was a consistent theme during the MSNBC town hall that Pilgrim attended – standing up against racism and learning how you can be an ally to the movement.

Embracing diversity and inclusion in life and in work not only makes you feel better about yourself, it also leads to greater group creativity and improved organizational innovation. Differing perspectives often enrich outcomes. In order to become more color brave and build your diversity skills, you need to be willing to surround yourself with people who don’t look or think like you. “Step outside of your comfort zone and get to know people who are different from you in some way,” advises Creary. “Let them know that you are interested in learning more about them. Know that some people prefer to share little personal information, while others prefer to share a lot. Often, people who share little information are afraid of being judged – so don’t push too hard if they do not disclose a lot about themselves. As you get to know each other better, perhaps by talking about similar interests, it may be easier to talk about where you differ. Practice “listening to understand” rather than listening to judge or to offer a counter perspective.”

Mellody Hobson Lucas offers a similar path toward color bravery: “Observe your environment, at work, at school, at home. I’m asking you to look at the people around you purposefully and intentionally. Invite people into your life who don’t look like you, don’t think like you, don’t act like you, don’t come from where you come from, and you might find that they will challenge your assumptions and make you grow as a person.”

What is unconscious bias and why is it so important to acknowledge that we all have it? Do you think you have it? Why or why not? What are some of the implicit messages that are ingrained in your way of thinking?

How does this article inspire you to “be the change” that we seek in the world?

Stephanie Creary says you should “Step outside of your comfort zone and get to know people who are different from you in some way,” in order to become more color brave. Follow her advice, as well as that of Mellody Hobson Lucas. Then report back to us on how it went. Tell us your story. What did you learn? Was it hard? Did you gain perspective? Include your story and your takeaways in the comment section of this article.

3 comments on “Learning to Be Color Brave”

5 Truths about Money During the Pandemic