Kelsey Juliana, a high school student from Oregon, has been in the news of late for her fight to protect natural resources from the effects of global warming. Climate change, as it turns out, is one of the five most likely risks threatening our world economy in 2014, according to a World Economic Forum report released the week of January 13, 2014, the same week Juliana brought her case in front of the Oregon Court of Appeals. The risks report set the stage for the World Economic Forum’s annual meeting in Davos, Switzerland, that began January 22. …Read More 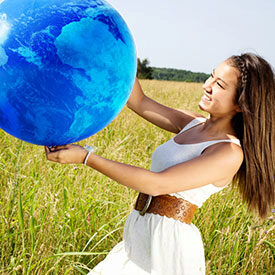 Kelsey Juliana, 17, is fighting for your rights. Juliana, a senior at South Eugene High School in Eugene, Oregon, teamed up with Olivia Chernaik, now 13, in 2011 to file a lawsuit against Governor John Kitzhaber and the State of Oregon.  At issue is a document known as the Public Trust Doctrine, a law that forces the state government to ensure public access to, and protection of, natural resources, like rivers and beaches. However, the doctrine does not specify the atmosphere, which Juliana and Chernaik say is being damaged by global warming, the continued rise in the earth’s average temperature as a result of pollution, and other factors. They claim the Oregon government broke the law by failing to protect natural resources threatened by climate change.

On January 17, 2014, Juliana and Chernaik sat in a classroom-turned-courtroom at the University of Oregon to listen to testimony from their lawyer, Tanya Sanerib, who represented her clients in front of a three-judge panel from the Oregon Court of Appeals. Sanerib argued that Oregon courts could order the governor to do much more to stave off climate change and protect the state’s air and water. But an attorney for the state Department of Justice argued that such action would be up to the federal legislature, with input from the governor and the public, to decide whether and what should be done to preserve the state’s natural resources. A decision on whether the Oregon courts have the authority to take up the matter will likely not be made for several months.

Meanwhile Juliana, who plans to participate in the Great March for Climate Action from Los Angeles to Washington, D.C., after she graduates from high school this spring, will continue her activism. “I really do believe [climate change] is a crisis of our generation and future generations,” she says.

The Oregon teens’ legal battle over global warming is directly in line with what some of the world’s greatest thinkers determine to be one of the world’s most serious risks. The World Economic Forum (WEF), a nonprofit organization based in Davos, Switzerland, that brings together top business and political leaders to work through important world issues, released its “Global Risks 2014” report last week in preparation for its big annual meeting in Davos this week, January 22-25. The report identifies occurrences and threats – for more than 10 years — that can cause significant negative impact for countries and the business community. This year, the most likely five risks, ranked in descending order, are income disparity, extreme weather events, unemployment and underemployment, climate change and cyber-attacks.

Two of the report’s contributors — Howard Kunreauther, Wharton operations and information management professor and co-director of the school’s Risk Management and Decision Processes Center, and Erwann Michel-Kerjan, the center’s managing director — offered Knowledge@Wharton their assessments of the report’s major takeaways and the challenges that lie ahead for global risk managers – those individuals who are in charge of limiting risk for companies.

Both Kunreuther and Michel-Kerjan are optimistic that the 2014 edition of the annually published report — titled, “Understanding Systemic Risks in a Changing Global Environment” — will contribute to a steadily growing understanding of global risks. “We have found that, because of a whole series of events that have happened in recent years, corporations are paying much more attention to issues of global risk and recognizing that risk management is something that they have to put on the table,” Kunreuther says. “From that vantage point, this report is something that [executives] have found very useful because it highlights not only what they may be thinking, but also what a [number] of experts around the world are thinking” across various disciplines.

Perceptions about what constitutes a major risk have changed significantly in recent years. For example, the top five global risks identified in the 2014 report are entirely different from the top five risks identified by executives, researchers and other experts who were surveyed in 2007. In 2007, the five systemic risks rated most likely were, in descending order, the breakdown of official information infrastructure, followed by chronic disease in developed countries, oil price shock, China’s economic hard landing and, finally, the potential for collapse of asset prices, such as stocks.

When ranked in terms of their potential impact — rather than likelihood — the five highest-ranked risks for 2014 were also completely different from those identified by respondents in 2007. In 2014, the five most impactful risks were fiscal crises, followed by climate change, water crises, unemployment and under-employment, and critical information infrastructure breakdown, which includes the Internet and wireless networks. Not one of these five risks was ranked as having the most potential impact in 2007. The 2007 top-five list began with asset price collapse, followed by retrenchment from globalization, interstate and civil wars, pandemics and, finally, oil price shock.

Other kinds of risks that may not always appear in the top-five lists are nevertheless widely recognized as “going to be around for a while” by experts, Kunreuther adds. In 2011, climate change was ranked fifth for likelihood and second for impact, but dropped off the list entirely until 2014, when it re-emerged — in part because of the destructive power of Hurricane Sandy. “Climate change is recognized, in general, as a long-term problem, but it did not have a lot of salience in 2007 and 2010” in the absence of dramatic news events, he notes.

‘Everyone Has to Pull Their Weight’

The 2014 report also highlights the critical issue of global interdependency, which means that countries depend on each other, and therefore their risks also affect each other. It includes a “Global Risks 2014 Interconnections Map,” which demonstrates that “the numerous and complex interconnections between [risks] can create consequences that are…difficult to predict.”

Kunreuther notes that “interdependency and the challenges that we face with interdependency” are a major theme of the 2014 report. For example, he says, “climate change is a global risk – everyone has to pull their weight. [Addressing it] requires the global community to try to take some steps, but [we] also have some real challenges with respect to doing that.”

Michel-Kerjan points out that in the case of systemic risks, such as asset price collapses, “whether it started in the U.S. or in Asia, everyone will be interconnected.” He adds that the 2014 report is hardly the first to stress that “risks should not be considered in silos…. Just because you are an environmental [specialist], that doesn’t mean you should be unconcerned about fiscal issues.”However, he concedes that such behavior requires a significant change in mindset. Numerous other reports have called for people not to “think in silos, but that is hard to do. People love boxes,” he says.

According to the report, income inequality – basically the gap between the rich and the poor — is “most likely to cause serious damage globally in the coming decade.” Kunreuther points out that the problem can’t be isolated: Developed as well as developing economies will need to take steps to deal with issues of income inequality and affordability. These disparities can lead to frustration and social unrest.

The report notes that “the younger generation” – identified as aged 30 or below – “is more concerned about the potential impact of global risks.” Global warming activists like Juliana and Chernaik demonstrate this trend as they tackle the issues that threaten their future.

Who is Kelsey Juliana, and why is she making news? Do you agree with what she and Olivia Chernaik are doing? Why or why not? Both started their activism in middle school — what does that tell you about them?

What are the five most likely global risks for 2014? How do they compare with 2007? What are those risks that would have the highest impact in 2014?

What is global interdependence?

Why do you think income inequality is considered the greatest risk?

If you had to take action on behalf of a global risk of any kind, what would it be and why? How might you proceed to raise awareness or bring about change? Can one person make a difference?

One comment on “The Greatest Risks Facing Our World Economy”