In honor of the comeback of Donald Trump’s “Celebrity Apprentice,” in which the real estate tycoon must fire a new contestant each week, KWHS looks at the realities of job loss. Someday you may receive a pink slip at work, but as experts suggest, it is most likely a career opportunity in disguise. …Read More 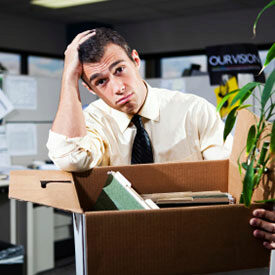 It happened to Groupon CEO Andrew Mason. It happened to Scott Thompson, once the CEO of Yahoo!, and Scott Forstall, the guru behind Apple’s operating system for iPhones and iPads. And someday, getting fired may happen to you.

Getting fired is hardly a unique occurrence these days; it affects about 1.5 million Americans each month, according to government data. Take a survey of your friends, and you’ll likely find one who has either been fired from a job or had a parent or relative who has been let go.

Sometimes people get the dreaded pink slip (notification of termination or layoff) because of their performance at work, but more than likely it is because their company decided it didn’t have enough money to keep them on the payroll. Countless companies facing profit losses and poor financial returns have announced corporate downsizings and layoffs during the economic crisis of the past several years. For instance, in early March Compuware of Detroit said it would lay off 160 employees and close or shrink 16 of its offices around the world in the first round of its “cost-cutting plan.” The automotive and financial services sectors have been particularly hard-hit. General Motors, for example, has cut more than 100,000 jobs since the recession began in December 2007. Whether you are terminated for your bad job performance or laid off due to broader corporate circumstances, getting fired stinks — but it’s far from the end of the road for your career.

For some, in fact, it is a new beginning, though it may not look or feel like it at first. “When I was working as an audio engineer for the Blue Man Group in New York City, I was 100% career-focused. But one day I was called into a cold room and told, ‘Your position is being eliminated,’” says Ania Grzesik, 26, in a Women’s Health magazine article entitled “What to Do Next.” “But the layoff made me realize that even if my old job was great, I wasn’t totally happy: My boyfriend was 800 miles away. I moved to Chicago and began negotiating with my former employers about freelancing. My new gig is more lucrative than my salaried job, and I get more time off!” Grzesik’s take-away from her abrupt departure? [tweetthis alt=”” hashtag=”” url=””]“Use a job loss as an opportunity to take stock of your life: If I hadn’t been laid off, I would still be in New York, in that same little room.”[/tweetthis]

Still, the realities of layoffs and firings have hit many families hard. Tyler Fugazzie was a sophomore in high school a few years back when his dad, John, lost his job. His dad’s unemployment not only gave his family a financial shock, it shook his confidence that studying and doing hard work would lead to a good future. “I viewed the working world as almost nonexistent,” says Tyler, now a 21-year-old senior at The College of New Jersey in West Trenton, N.J. “I literally believed that there were no positions available. It took me a while to figure out the field and area I’m most interested in, which is still an ongoing search.”

Losing a job isn’t part of anyone’s ideal plan, but in the long run the experience that comes with working at multiple companies in different corporate cultures is a value to most employers, notes John Challenger, CEO of Challenger, Gray and Christmas, a Chicago-based employment consulting firm. “There is no more lifetime tenure. No matter how good you are, situations change. Even the very best people find themselves without a job. CEOs are the most accomplished people in the country, and they’re losing their jobs all the time,” he says. “[tweetthis alt=”” hashtag=”” url=””]In a career, the ability to go from place to place, from one job to another and be resilient in the face of setbacks is important. Some of the most successful people build their careers that way.[/tweetthis]”

All three of the CEOs mentioned earlier are destined to land at new jobs after being fired from their tech firms. Andrew Mason got canned on February 28, following several disappointing quarterly financial reports. Scott Thompson was ousted after Yahoo! execs found out he lied about his academic credentials, but now he is CEO at ShopRunner, a membership-based Internet shopping service that offers two-day shipping to dozens of retailers. Scott Forstall was removed from his post after Apple’s new mobile map service was widely criticized, but he is still working as senior advisor to CEO Tim Cook; he plans to leave the company sometime this year.

Tyler’s dad, John Fugazzie, eventually found work but was laid off again last fall. Although his dad is job-hunting yet again, Tyler says that he’s learned an important lesson from the experience: When you lose a job, do something to fill your down time in addition to looking for work. “Invest in a skill, activity, or hobby and invest in your community,” he says. “I feel that [tweetthis alt=”” hashtag=”” url=””]too often people get caught up in having to plan or think through their future. There is definitely a degree of thought that needs to happen, but at the end of the day, you need to roll up your sleeves and try something.”[/tweetthis]

That investment may just pay off in new and unexpected ways, as Tyler’s dad discovered. In 2011, John Fugazzie founded Neighbors Helping Neighbors USA, a support group for job seekers. It started out as a weekly meeting in New Jersey, has now expanded to include chapters in Boston and Buffalo, N.Y., and has received national media attention.

John’s No. 1 piece of advice to anyone, teen or adult, who is looking for work: Use your personal network to find new job opportunities. Top-flight CEOs may get a job based solely on their reputation, but most people who find work are doing so by talking to former co-workers, friends and classmates who have leads on jobs. “If I have a job to fill [as an employer], I want to find someone I know, someone I worked with before,” says John. “I might have to hire someone who is related to one of the bosses, or to a client who makes you a lot of money. Nobody’s sending a résumé in off the street and landing a job anymore.”

That makes Challenger’s top tip for gracefully leaving a company all the more valuable – even if you are really angry at being let go. “Whenever you leave an organization, you leave it with dignity. Don’t burn any bridges,” he says. “People go back to work at companies they’ve worked for in the past, they work with former coworkers or suppliers elsewhere. When you’re leaving, leave in the right way.”

How is today’s job market contributing to more people getting laid off or fired, if at all?

Why should you not look at being fired as the end of something, but instead as a new beginning?

What does it mean to build your network, and why is that important in today’s job market?