The Central Bank of the United States, a.k.a. the Federal Reserve or the “Fed”, has grabbed lots of headlines in recent months as the nation tries to pull itself out of the economic downturn that began in 2008. How exactly can the Fed put billions of dollars into the economy and how does that affect our money? Think interest rates, price inflation and bubbles, and the montage of monetary policy begins to take shape.…Read More 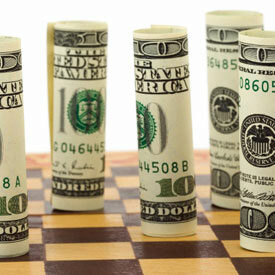 On a quiet day in a local American community, the economy is in a slump. People, hard-pressed to pay their bills, are looking for a boost when, suddenly, their prayers are answered. A fleet of helicopters roars out from behind the next hill, Apocalypse Now-style, and begins dropping bags of cash everywhere in a massive monetary stimulus effort.

This is the imagery Milton Friedman, Nobel Laureate in Economics, used to describe the expansion of the money supply by the Federal Reserve. While the reality of monetary expansion probably isn’t quite as dramatic as Francis Ford Coppola’s film, it does beg the question of how exactly the Fed can quickly put billions of dollars into the economy.

The Federal Reserve (the “Fed”), the Central Bank of the United States, manipulates the economy through the Federal Open Market Committee (FOMC) in New York City. Joanne Im, a senior from West Windsor-Plainsboro High School North in Plainsboro, N.J., was captain of last year’s winning team in the High School Fed Challenge, where teams analyze current economic conditions and recommend a course for monetary policy.

Im knows a thing or two about the Fed. “The Federal Reserve has a dual mandate to promote stable prices and maximum employment through its control of monetary policy,” Im notes.

When the economy takes a dive and the Fed wants to help get the economy cranking again, it can do that by putting more money into the system in a couple of different ways. One of the most important ways is to buy outstanding government debt, mostly in the form of Treasury bonds, notes or bills. When the Fed buys up these debt instruments, the sellers end up with cash instead of the paper debt they used to hold. The sellers then deposit that cash in banks, which means the banks end up with more money that they can use for making loans. When banks have more money to lend, they can make it easier for businesses to get loans. And when businesses take out more loans to expand, it helps the whole economy to grow. The Fed decided to do such a move in early November 2010. It announced a $600-billion plan to stimulate the economy, which hasn’t been able to recover from the dramatic downturn of 2008. But rather than being cheered for its actions, the Fed was denounced for irresponsibility.

Why would something that is supposed to create jobs and prosperity meet such fierce resistance? It turns out that the Fed can actually harm the economy when it floods it with cash. “There is extreme danger in mistiming bond purchases and underestimating inflationary pressures,” says Im, referring to inflation, defined as the long-term rise of prices. Increasing the cash supply lowers interest rates — the rate at which you borrow and lend money. While artificially low rates are good for some, they are very bad for others.

Let’s say you want to start an online business and need a few computers to get it running. If you don’t have enough cash to pay for the computers, you can go to the bank and ask for a loan. When interest rates are low, you can take the loan and not worry about paying a large amount of interest.

This seems great, until you remember that for every borrower there is a lender. Imagine that you take the earnings from your computer business and put them in the bank for your college tuition. At the same time as the bank loans out money at very low interest rates, it also pays lower interest rates on any money that is deposited.  This means that the interest you earn on your computer business profit will be quite small, making it harder to save enough for the things you will later need. “It’s a double-edged sword,” says Im.

This low interest rate on savings is made even worse by inflation. The excess cash the Fed puts in creates higher demand for goods, driving up prices. “Inflation is extremely detrimental to any economy, distorting price signals, arbitrarily redistributing money and discouraging spending as consumers see prices go up,” notes Im.

Too Low for Too Long

Maybe the Fed should never stop buying bonds and try to keep interest rates near zero? Im points out that it is “basic Econ 101 that the more you have of something (money), the less valuable it becomes.” In the Fed’s case, one of the biggest dangers of a permanent low-interest rate environment is “bubbles.” People have extra cash and nowhere to invest, so they invest in increasingly risky things, like junk stocks. When the music stops, these investments are the first to become worthless, and investors lose all their money.

We learned this the hard way in 2008. After the dot-come bubble and September 11, “the Fed kept low interest rates to encourage an economic rebound, but kept them low for too long and failed to notify markets of brewing inflationary concerns,” notes Im. The result? “Market participants became overconfident, resulting in the excessive risk-taking and speculative activity that led to the housing bubble.” The Wall Street bank Lehman Brothers collapsed under the weight of its investments, and people who bought houses with sub-prime mortgages saw their interest rates skyrocket. After years of stimulus, the crash was brutal.

Interest rates are still very low, and many policymakers worry that new bubbles and inflation may emerge from this. Yet with “progress on employment remaining painfully slow and political turbulence in the Middle East worsening,” Im suggests that the Fed’s hands are tied.

Why was the Fed’s $600 billion plan to stimulate the economy met with such fierce resistance?

What is a bubble? When was the last time our economy had one and how did it play out?

5 comments on “The Fed Revealed: The Dangers of Monetary Policy”