Young, Rich and Ambitious: The Life of a Successful Teen Web Entrepreneur 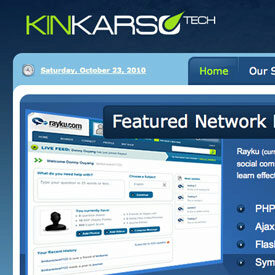 It’s a place where teens can go to socialize, shop, listen to music, watch movies and play video games. For some, like 17-year-old Donny Ouyang, it’s even a place to earn some serious cash.

No, it’s not the mall — it’s the Internet. Ouyang is among a growing group of teen entrepreneurs making lots of money online by turning hobbies into businesses.

From Hacker to Hobbyist

What began four years ago as an obsession to learn HTML in order to hack Neopets, a game and puzzle website, evolved into a hobby creating websites. After he earned $200 from selling one of his sites, Ouyang wanted to become an entrepreneur. “Once I found the passion, there was no stopping me,” he says.

Today the high school senior from Richmond, Canada, says he earns more than $6,500 a month as the founder and CEO of Kinkarso Tech Ltd., a web development company.

So what’s he do with all that money? There were some spending sprees at first, admits Ouyang, but now he reinvests everything back into his business, with one exception. “I’m saving up to buy a car.”

Besides making six figures annually, Ouyang is your everyday teenager. He goes to school, plays basketball and piano, does his homework, spends time with his family and hangs out with friends, who aren’t phased by his CEO status. “I still treat him the same as I treat my other friends,” says 17-year-old Tom Wang. “I think it’s cool that Donny can work at home doing something he loves and get paid.”

According to a recent Junior Achievement survey of more than 700 teens, nearly 60% say they want to start their own business someday, motivated by a desire for independence. “Building your own business means that you are your own boss,” says Ouyang, who only spends two to four hours a day working online. “You decide what you want to do and what you want others to do.”

Being the boss enables Ouyang to stick with what he’s good at: web flipping. He buys websites, makes them marketable and then resells them. If a site requires stuff he doesn’t like to do, he just hires someone. “I outsource for web designers, programmers and writers and pay them per job,” says Ouyang who also considers himself a project manager, along with being a website developer, Internet marketer and website broker.

Although Ouyang was insecure about his age at first, he no longer hides it from clients. In fact, he finds that most people are impressed. Justin Brooke, owner of Mpyre Marketing., an Internet marketing firm based in Idaho, has worked with several teens in the Internet marketing world, but Ouyang outshines them all, he says. “He’s a risk taker, doing things bigger and bolder than people twice his age,” states Brooke.

In addition to selling websites, Ouyang also owns sites that make money from ads, such as www.battleforums.com — an online community for Blizzard video game fans with more than 60,000 members — and www.livetv.ws, which links to more than 1,300 free TV channels worldwide and has over 20,000 members.

Kinkarso Tech has also been a learning experience. “Possibly the biggest mistake I ever made was thinking that I can do it all by myself,” says Ouyang. “Without outside help, I’d be here all day trying to figure out what to do.”

Ouyang developed a network of mentors that he can call up anytime for advice. Brooke provides Ouyang with marketing suggestions periodically, but when it comes to mentoring, he says it’s a two-way street. “I’ve actually learned a lot from Donny,” says Brooke, who is 10 years older. “When it comes to web flipping, he’s doing things new and fresh and always pushing the boundaries.”

From writing business plans to landing a $25,000 bank loan, Ouyang has learned a lot about doing business online. “Many people believe they have to be gifted in order to earn money online, but I disagree,” he says. “I believe that anyone, anywhere, in any situation can do what I do, as long as they are willing to take the risk to put their best foot forward.” Ouyang wrote the DigitalThrone ebook, at www.digitalthrone.com, to help readers learn from his successes as well as his failures.

Thanks to his bank loan, Ouyang is working on several new projects, including one that could revolutionize the education industry as well as launch his Internet career to the next level. Stay tuned to www.ryku.com, he says.

“Donny is an amazing kid and I’m positive he’ll be a multi-millionaire before he hits 30 if he keeps up his momentum,” says Brooke.

So, where does Ouyang see himself in 10 years? He plans to go to college, while also maintaining his Internet empire. “Hopefully I’ll own a stable business with an actual bricks and mortar office, working on what I love and enjoying life … and finally have a car.”

Take Command of Your Credit Score