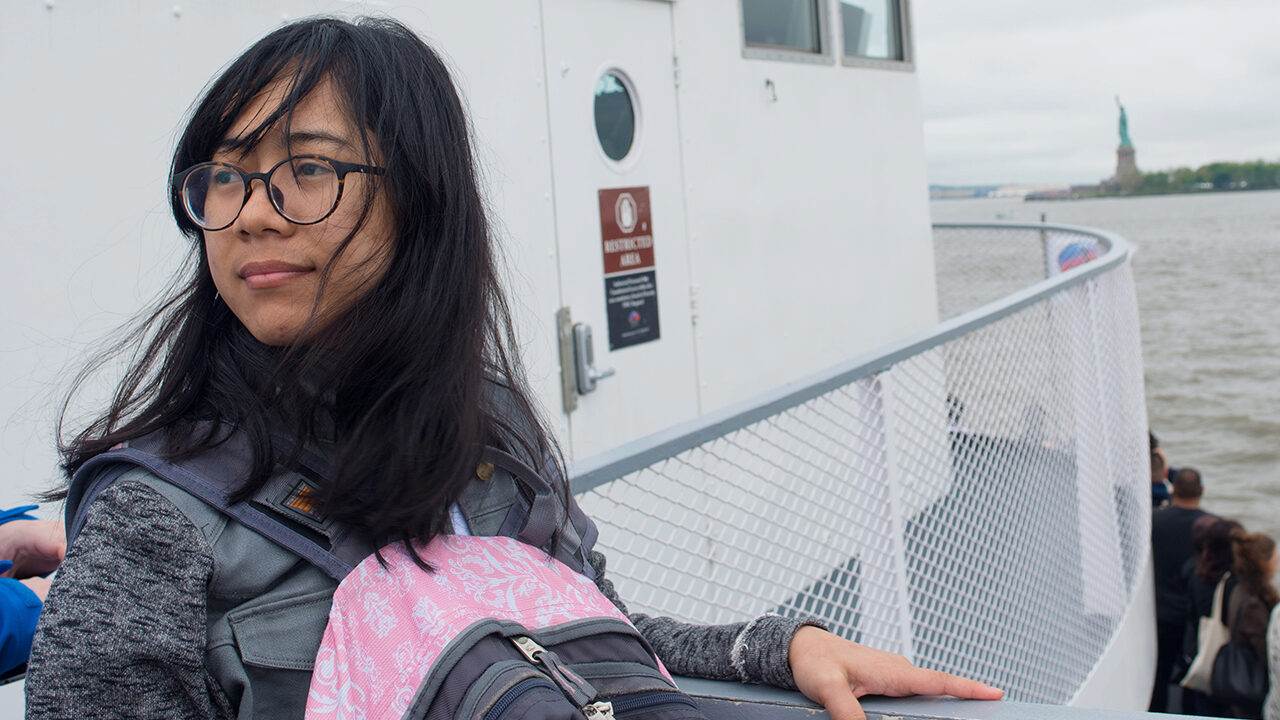 Anjana Drukpa, a junior at Lincoln High School in Des Moines, Iowa, arrived in the U.S. from the mountains of Nepal when she was only 7 years old. She moved with her two sisters and her single mother. “She wanted us to come here to have a better life, better housing, for safety and education, so we can learn, pursue our career and then get a job,” says Drukpa, who is one of 13 high school students recording their immigrant stories for a podcast project at Drake University, also in Des Moines. “We’re just working really hard to make our mom proud for what she has done for us.”

Drukpa’s story and those of her classmates have become part of the U.S. experience – generations of immigrants and refugees landing in a new country from far away to discover opportunity and a better life. Many of us have friends, co-workers and neighbors with similar tales of how they integrated into the U.S. culture and economy. These connections make the recently proposed RAISE Act more personal and provocative than your typical policy reform.

Our sister publication Knowledge@Wharton recently sat down with Kent Smetters, a Wharton professor of business economics and public policy, to talk about the impact of proposed immigration reforms on the U.S. economy. KWHS gleaned a few of the essentials from that interview and other sources to help you start thinking about how the RAISE Act would impact your lives and communities.

The current immigrant situation in the U.S. About 800,000 legal immigrants (we are not talking about undocumented immigrants here) come into the United States every year, a quarter of a percent of the U.S. population, which is 325 million and counting. About 45% of those immigrants are college-educated, and the rest are typically very unskilled. The way to think about immigration in America is to adopt a barbell approach: We have a lot of people who are very unskilled, and a lot of people who are college-educated.

RAISE and its impact. RAISE stands for Reforming American Immigration for a Strong Economy. Reintroduced by U.S. Republican Senators Tom Cotton and David Perdue in early August and endorsed by President Donald Trump, the RAISE Act seeks to raise the bar for skill sets but also aims to reduce the number of legal immigrants allowed into the country by 50% over the next 10 years. It lowers the total amount of legal immigrants every year to roughly about 400,000. But it tries to change the skill mix such that instead of 45% of them being college-educated, it would be around 75%.

The motivation for these policy changes. According to its sponsors, the RAISE Act seeks to spur economic growth and raise American workers’ wages. “For decades our immigration system has been completely divorced from the needs of our economy, and working Americans’ wages have suffered as a result. Our legislation will set things right,” said Sen. Cotton in a statement. “We will build an immigration system that raises working wages, creates jobs, and gives every American a fair shot at creating wealth, whether your family came over on the Mayflower or just took the oath of citizenship.” Added Sen. Perdue: “We want to welcome talented individuals from around the world who wish to come to the United States legally to work and make a better life for themselves. The RAISE Act will create a skills-based system that is more responsive to the needs of our economy and preserves the quality of jobs available to American workers.”

A critical look at the numbers. Wharton research indicates that the RAISE Act could actually be a big negative for the nation’s gross domestic product (GDP) and employment. GDP is the most important economic indicator of the U.S. economy as well as economies around the world. GDP measures all goods and services that a country produces – from cell phones and strawberries to the plumber who fixed your sink last week — and it can be a kind of directional marker, giving clues about everything from your likelihood of getting a job, to the interest rate you will pay on a car loan or other debt.  It also tells economists when to start using the “R” word: A recession is often defined as two consecutive quarters of contraction in GDP. A steadily rising GDP typically means that the economy is humming, whereas a weak GDP means the economy is hurting.

What the heck is PWBM? PWBM is the Penn Wharton Budget Model, a simulator that helps analyze the potential impact of proposed policy changes. The PWBM is non-partisan and works at the intersection of business and policy to help policy makers, the public, and businesses make fact-based decisions. It is not meant to make policy recommendations. See the related links that accompany this article (in the toolbar to the right) to access the PWBM website.

What the numbers tell us. Smetters, who is faculty director of the PWBM, says the model tells us that between now and 2040 the proposed RAISE Act could shave two percentage points off GDP growth and cause a loss of more than four million jobs. However, in the short-term, reforms would have little negative impact on jobs and GDP, while wages would actually rise, although they would flatten out over time. Overall, the impact will be negative for both GDP and jobs. If there were no change in the number of visas issued, but all you did was to increase the skill mix, that would be positive for GDP, which would go up by about a third of one percent over time. But you will have a negative effect on GDP by reducing the total number of visas (those immigrants allowed into the country). The main points are that if you simply tilt the balance towards more skilled workers, that’s a positive because skilled workers are going to be net producers for the economy, not just in terms of the taxes they pay but in terms of job creation. But if at the same time you reduce the total number of immigrants, the effect goes in the opposite direction.

Increasing immigration. Even if we didn’t change the skill mix but we just increased the number of legal immigrants, it would have a very big positive impact on the economy. That is both in terms of total GDP and the number of jobs. Now, someone might say that this is obvious if you have more people. But it turns out that it even increases the amount of GDP per person, or how much money is available across everybody including native-born workers. The reason behind that is that immigrants tend to work pretty hard, and they tend to have a very high attachment rate to the labor force. They are less likely to be on unemployment insurance and things like that, and so they are really a net positive, even at a per-person level, not just at an overall level.

Playing with the PWBM. The Penn Wharton Budget Model is available online and free for use by the general public. You can go right to the Penn Wharton Budget Model website and play with the different simulators by just literally moving different dial controls to see what would happen, for example, to Social Security. There are many different options there of how we could fix Social Security, and you could move those dial controls accordingly. There are more than 4,096 combinations with Social Security alone. Because it’s a very deep model that does a lot of big data and a lot of complex theory, you don’t have to wait a half-hour, or an hour for your results. We use cloud computing to pre-compute every single combination ahead of time so that you get instant results.

What is the RAISE Act and who does it affect?

Did you and your family immigrate to the U.S.? Share your story in the comment section of this article. How do you feel about the RAISE Act?

What is the Penn Wharton Budget Model and what does it tell us about the current proposals for immigration reform in the U.S.?

12 comments on “Immigration Reform in America: The People, the Proposals and the Economics”