Pursuing a career that you’re passionate about can lead you down many paths. Chuck Greenberg is proof that you can be a big success in the sports business swinging a briefcase, not a baseball bat.…Read More 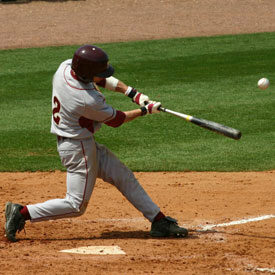 For anyone who hadn’t heard of him before, Chuck Greenberg, a high-profile sports attorney and minor league baseball team owner, shot to prominence in 2010 when he and Hall of Fame pitcher Nolan Ryan won a bid to buy the Major League Texas Rangers baseball team. Greenberg, having left his day job as a lawyer at Pepper Hamilton in Pittsburgh and sold the Altoona Curve, is now managing partner and CEO of Rangers Baseball Express, LLC. One reporter at the Dallas Observer newspaper said Greenberg has “the money and moxie to lead the Texas Rangers back to relevancy and into the playoffs.” The Rangers were the 2010 American League champs.

KWHS wrote an article about Greenberg back when he worked for Pepper Hamilton and still owned the Altoona Curve. Although he has since taken on Texas, his insights are still relevant to anyone interested in the business side of the baseball diamond.

Chuck Greenberg has always been a sports fan, playing baseball at Upper St. Clair High School in Pittsburgh and then at Tufts University, where he studied political science. He was a good player — but not a great one, leading him to one conclusion: “If I was going to be involved in sports, it wasn’t going to be in a uniform.”

So Greenberg went to law school and became a big-time sports and entertainment lawyer. He is a partner in the Pittsburgh office of Pepper Hamilton, where he heads the firm’s sports practice. A few years back he handled the deal in which famous hockey player Mario Lemieux bought the Pittsburgh Penguins National Hockey League franchise. Then he led that team’s negotiations to build a new $290 million arena in Pittsburgh. His job involves everything from handling big deals and arena leases to negotiating employment agreements for coaches.

Scott Kravchuk, assistant director of special operations for Minor League Baseball, the organization that oversees the teams, says that buying a team can be an expensive proposition. “Minor league owners are generally people with quite a bit of cash — ex-major league players, lawyers, doctors and others, with a love for and interest in baseball.”

Indeed, Greenberg is active in the daily business of his teams. “Affiliated Minor League franchises are really sales and marketing companies and the product we market is the experience at the ballpark,” he says, adding that he and other owners don’t actually have any role in selecting the players. The major league affiliates make those calls.

The players on Greenberg’s teams all arrive in the minor leagues at different stages of career development. “Some of them are top prospects that you’re going to see playing in the major leagues and all-star games, and others are guys who are just hanging on for a paycheck in baseball as long as they possibly can knowing that their chances to make it to the major leagues are very slim,” says Greenberg. “We’ve got players from different parts of the United States, Latin America, Australia and lots of other places, too.” One of the most memorable was Elvis Andrus, a 19-year-old who played for the Myrtle Beach Pelicans in 2007. Andrus, a native of Caracas, Venezuela, is now a short stop with the Texas Rangers.

And because major league baseball affiliates shoulder the expense of signing, developing, placing and moving all players, minor league baseball is, says Greenberg, a “very sound business model.” In other words, he’s making a lot of money as an owner, though he won’t say how much. “Our expenses are what we choose to spend to generate revenue [the money a team makes from selling tickets],” he notes. “The better minor league franchises are good at spending wisely but aggressively to generate revenue. Our franchises have done very well. We set attendance records year after year.”

When he’s not dreaming up the next entertaining promotion, Greenberg is supporting his teams from the stands. “Altoona is close to my home and I go to 25 games a year. I go to 12 or 15 games a year in Myrtle Beach and about 10 in State College.”

His sons, Ben, Jack and Jeff, are there with him, time permitting. Jeff graduated from the University of Pennsylvania in May 2008 and is attending Columbia Law School in New York; Jack is at Penn State (and on the baseball team) and Ben is at Ohio State University where he is studying business and sports management. “We are a sports-minded family that just loves baseball,” says Greenberg.