Ashley MacPhaille, 17, is a rising senior at the Academy of The Sacred Heart in New Orleans. She sat down with KWHS to discuss Hurricane Katrina, an internship with the Saints and her role model, Rita Benson LeBlanc.…Read More 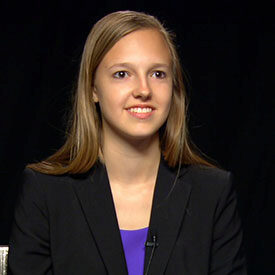 Ashley MacPhaille, 17, is a rising senior at the Academy of The Sacred Heart in New Orleans. Growing up in that city as a stanch Saints football fan, MacPhaille has witnessed firsthand how sports can become a life force for a community, especially after the devastation left behind by Hurricane Katrina. Knowledge@Wharton High School caught up with MacPhaille on the Wharton campus this summer — while she was attending the Wharton Sports Business Academy for high school students interested in sports-related careers — to discuss Katrina, an internship with the Saints and her role model, Rita Benson LeBlanc.

Knowledge@Wharton High School: Ashley, thank you for joining us today.

Ashley MacPhaille: Thank you for having me.

KWHS: How has Hurricane Katrina shaped your high school experience?

MacPhaille: Hurricane Katrina hit in 2005, so I was actually in the fifth grade when it happened. It took a while for New Orleans to recover from the hurricane — we’re back now and stronger than ever. I think the Super Bowl [when the Saints beat the Indianapolis Colts in 2010] definitely showed that. But New Orleans is unique in that the city has a special connection with our sports team. And my freshman year of high school is when we won the Super Bowl. It was the best thing I could remember. After we won, everybody was running out into the streets, we had a few days off school and we had a citywide parade where more people showed up than lived in the area of New Orleans.

Katrina was hard on everyone. I lost a lot of friends. I had friends who lost everything. I was lucky in that I got through it with my house and my family, and everyone was okay.

KWHS: How have sports played a role in New Orleans’ recovery after the hurricane?

MacPhaille: I think the Saints, once they came back to New Orleans — a lot of businesses left after Katrina — really gave New Orleans something to put their hope and faith into. We don’t have many sports teams. Now that Tom Benson has bought the [New Orleans] Hornets [basketball team], I think that more people will become Hornets fans and get more into it.

But up until this point, the Saints have been the main force for New Orleans. [For instance], in 2006, when we won [an important] game against the Atlanta Falcons, [Saints safety] Steve Gleason blocked the punt. This week a new statue was revealed of Steve Gleason blocking the punt outside of the Super Dome, which is very exciting. Can’t wait to go home and see that. But I definitely think that the Saints have played a large role in New Orleans’ recovery. And the Super Bowl, as I said earlier, has definitely proved that. New Orleans is back, we’re better than ever and we’re a contender for the top sports in the world.

KWHS: What’s your personal relationship with football and with sports back home?

MacPhaille: I’ve been a lifelong Saints fan. I still have all my jerseys of the old players and of Ricky Williams [a running back who spent three seasons with the Saints]. I actually interned with the Saints in the [public relations] department [last year]. Once I realized that I wanted a career in sports business and I was able to get the internship, I had to separate myself from being a lifelong sports fan and from wanting to pursue sports business as a career, which has been a little difficult. But as long as I can remember, I’ve loved the Saints, and I’ve loved being able to have something that everyone in the city — regardless of race, color, wealth, anything — comes together to watch. It’s a uniting force in our city.

KWHS: Tell us a little bit more about the internship; what did you do? Also, what captivates you about the business of sports? Why are you drawn to it?

MacPhaille: I’m interested in sports business just because, well, I’m interested in business in general. I’ve watched my parents grow and develop their own company, and I love being able to manage people and think about marketing skills. My parents set up a website for their business and I got to see that expand and grow.

KWHS: What type of business do they have?

MacPhaille: My parents own a real estate development company. But I’ve always been interested in watching a business develop and eventually starting my own. I had my own lemonade stand when I was little. I had a jewelry store. I was always trying my own business ventures. I’m interested in sports business because [it allows me to] combine all of my interests. I can combine my love of sports and the sports team in general. There’s more of a sense of unity in that field than in some other areas of business; I really like the idea of everyone working together as part of a team. I like working with others and backing people up.

In my internship with the Saints, I worked in the PR department. I was lucky enough to land an internship there. It was a terrific experience. Basically, my responsibilities were to help out with media credentials [for reporters covering games]. Also, help with the yearbook, the black book and the media guide, writing player bios, coaches’ bios and [doing] editing. It was a lot of work, but it taught me about the different areas of the sports business. Now I’m positive I do want to pursue a career in sports.

KWHS: Can you tell us who Rita Benson LeBlanc is and why she inspires you?

MacPhaille: She is a part-owner of the New Orleans Saints, and she’s also one of the managers there. She inspires me because she is one of the only female executives in the NFL, really all of sports. She plays a large role in the Saints organization. [It’s great to have] a female executive whom I can look up to, and I want to emulate her career path and eventually become a Rita Benson LeBlanc someday. It’s really inspiring being able to see someone who has been so successful in her field as a woman, especially in a career that’s so male dominated.

KWHS: Did you meet her during your internship?

MacPhaille: No, I did not. But I hope to meet her someday.

KWHS: What would you say to students who feel that being a pro athlete is the only way to participate in sports? How would you respond to that? Students often believe that they want to be that champion on the team, but there are also other ways that they can engage in sports.

MacPhaille: I think that question is particularly interesting to me because my sister is a national champion for acrobatic gymnastics. So I see both sides of sports in my household. I see the fan perspective — and I am trying to learn more about the business perspective –and [I see] my sister, who’s spending 30 hours a week in the gym trying to make it to the world championships. I’m so proud of her for that.

I think that there are so many different career opportunities within sports, and being a pro athlete is so competitive. You can still have a sports career without necessarily being a player. I think as long as you have the passion, you should pursue it, whether it is being an athlete or an NFL general manager.

KWHS: What’s next for you after high school? What do you see as your ideal career path?

MacPhaille: I’m hoping to attend Wharton. I don’t know exactly what I’d major in yet, but I know I want to study undergraduate business. [I want to] have a few more internships in college; maybe work more with the New Orleans Saints. And eventually [I want to] have a career in sports business — whether it’s in managing or marketing, I don’t know yet. I’m excited to see what’s next.

KWHS: Thank you for joining us.

MacPhaille: Thank you for having me.

The Retail Rat Race: ‘Tis the Season for Shoppers, Stores and Sales