A Young Entrepreneur Deals with Copyright Woes on Her YouTube Channel

At age 14, Marina López Aísa of Spain created Navhy, a YouTube channel with subtitled videos that showcase the lyrics of top American hits in both English and Spanish. Two years and 20 million online visits later, she has had to put Navhy on the back burner because of copyright issues. She talks to KWHS about her latest projects as a technology entrepreneur.…Read More 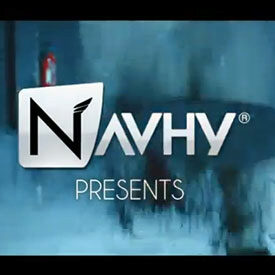 At age 14, Marina López Aísa of Spain turned her passion for American music into an enterprise when she created Navhy, a YouTube channel with subtitled videos that showcase the lyrics of top American hits in both English and Spanish. Two years and 20 million online visits later, her project has been stymied by the fact that “copyright [a legal concept that gives the creator of a song exclusive rights to it] is impossible to acquire legally,” she says.

As some doors close, others open. López Aísa, now 16, is a graphic designer for American singer Tony Brown. Among other things, she will soon introduce a project that she believes will revolutionize the way people lose weight. KWHS spoke with this young Spanish designer about her copyright problems, her plans for the future and her plea for other young women to get involved in the technology field.

Knowledge@Wharton High School: What were your first steps as a technology entrepreneur?

Marina López Aísa: I began with Navhy when I was 14, just for fun. I like music with English lyrics a lot [Rihanna, Beyoncé, Kanye], and I got the idea of subtitling songs in English and Spanish so that more people could understand the words of the songs that I liked. Navhy had a great deal of success, and in less than four months, the videos had two million visits, so I decided to take the next step toward creating a real project — a company in which I was the only one working on the [YouTube] subscriptions [for the videos featured on Navhy]. [Now it has] more than 20 million total visits and 20,000 subscribers.

I am a community manager with 5,500 fans on Facebook; I control the editing, logo design and structure of the [online] communities [I create on sites like YouTube]; … It’s hard, and even more so when music producers work against you by deleting videos because the copyright [for that song] is impossible to acquire legally. There are other people on YouTube who also subtitle songs, but I am the only one who has created an elegant and comfortable design for users, while also managing to think about the project and a future company, since the other channels are only that — just channels on YouTube

KWHS: Please explain the copyright problems you are dealing with.

López Aísa: I decided that with Navhy everything was going to be legal, so along with my lawyers and the impressive data about visits to the [Navhy] channel (70,000 visits a day), I went to speak with Universal Music in Madrid, which was the only recording company that wanted to deal with me apart from EMI España, which had no idea about copyright permission on YouTube. It seemed like a great idea to them, but they had to speak with their bosses in the U.S., since the [copyright] permissions were for foreign artists [in the U.S.]. I never heard anything again from them; they didn’t even answer my telephone calls. The visits that Navhy was getting at that time could have provided enormous profits for the music companies and for me, but they squandered the opportunities that they had because their own companies were badly organized when it came to the subject of copyright.

KWHS: How were you thinking about making a profit?

López Aísa: In the same way that they do at VEVO, the company that controls the video clips on YouTube, and which finances itself through advertisements. I had also planned to finance my company by merchandising the artists.

KWHS: What happened after this first attempt?

López Aísa: Later, I spoke with Tuenti [the largest social network for adolescents in Spain] in order to acquire the permissions through them. They helped me a lot, but [the recording companies] wouldn’t give all the permissions even to Tuenti, which means that Navhy, the way that it is conceived, cannot continue to operate for the time being. Currently, the recording industry is collapsing because it is unable to take advantage of and monetize opportunities like this. It shuts the door entirely on new projects, and that hurts.

Of all the projects that I have, the most successful — but also the one that has the least future — is Navhy, because I have to deal with the barrier of copyright, which [the recording companies] won’t give me. Without that, I can’t make any progress.

KWHS: What other projects are you pursuing?

López Aísa: I haven’t yet announced the other projects that I am involved in. What’s different from Navhy is that I work with other people on them, and I am the head of design. The first one is called Faraway. In that project, I work with three programmers. It involves a tool for using the functionality of the mobile Web. I can’t say any more than that since we haven’t introduced it yet. I hope to do that [soon].

The second is called Tudiet, and I work with a web programmer on it. I can only say that we hope to revolutionize the way people lose weight. We will soon be looking for more programmers for these apps. Several programmers have offered to work on the Android app, although I hope to get more developers for iPhone. I continue to be the designer for the entire project, both for the apps and for the web.

I also manage the graphic images of American singer Tony Brown, for whom I have made [disc] covers and a collection of photo shoots…. I met him through Navhy Covers, a division of Navhy in which young artists interpret the songs of other artists. Tony Brown was one of the first to appear, and there have been more than 50,000 visits to his video on Navhy. He contacted me and asked me to take care of his artistic promotion, since he really liked the design that I had done for his video. He is a very young artist, just 18 years old, and has a lot of potential; he is always happy to help people that way.

In addition, I am working on various corporate logos, but I cannot reveal any information because I have been told not to do so.

KWHS: What kind of reactions have you had from other people as a result of your age? Do you believe that people have made it easier for you?

López Aísa: Not a great deal, although it is true that when the people you are dealing with see that you are 15 or 16 years old, it creates more expectations, and your work makes more of an impression. But other people undervalue you. It depends on which people you are talking about.

KWHS: What recommendations do you have for other young people who want to set up entrepreneurial projects?

López Aísa: I recommend that they [are open to learning], because when you are an entrepreneur and especially when you are so young, you are learning 90% of the time. Another thing is that they should specialize in those areas that they like the most in technology, and then create a team in which each person takes care of one activity. In my case, it has been design, but you always need more programmers than designers. In addition, I encourage more young women to get involved in this, since I am the only young woman of my age in any of the projects that I am doing or that I know about. I don’t know why girls are [for the most part] absent [from this business], but it is a problem.

Career Insight: Serguei Netessine on the Importance of Thinking Globally