Tech companies large and small spent the second week of January 2012 at the Consumer Electronics Show in Las Vegas giving the world a first look at the latest, greatest high-tech gadgets for consumers. Are you ready for smart TV? …Read More 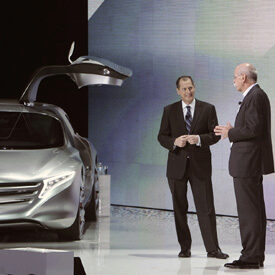 Last week, the world’s largest technology companies converged on Las Vegas for The Consumer Electronics Show (CES) to reveal what they hope will be the next great must-have gadgets.

For diehard techies like Daniel Brusilovsky, the 19-year-old founder and CEO of San Mateo, Calif.-based Teens in Tech Labs, it is an annual highlight more eagerly awaited than the holiday season that precedes it. “I follow the consumer electronics industry very closely, and coming to CES is almost like the icing on the cake. It’s the chance for us to get a hands-on perspective on what we’ve been reading over the last few months, and that’s really exciting for me,” says Brusilovsky, whose company supports young entrepreneurs through resources like the Teens in Tech Conference, Teens in Tech Incubator and Teens in Tech Blog. Brusilovsky also advises startups like Everyme, a new technology to improve the address book experience, and works with JESS3, a web design and social media strategy company in Washington, D.C., as the Silicon Valley evangelist.

The Consumer Electronics Show, called CES for short, is held every January and attracts a whopping 140,000 people over its four days. More than 2,700 companies — from heavy hitters like Microsoft and Samsung to start-up tech firms — exhibit at the show to display their newest products.

Since the first CES was held in New York City in 1967, the event has featured the debuts of products that became huge hits in American households. In 1970, for example, the VCR made its first appearance. CD players came on the scene in 1981, DVDs in 1996, high-definition TVs in 1998 and blu-ray disks in 2003.

This year, the big product launches have focused largely on two areas: Internet-connected televisions and tablet computers, says Andy Ihnatko, a technology blogger, columnist for the Chicago Sun-Times and senior contributor to Macworld Magazine. Many of the products debuted during the show will be in stores by mid-2012 and be on sale by the time the next Christmas shopping season rolls around. “A lot of companies use the heat of CES to show off their entire fall collection, to put it in the terms of the fashion industry,” says Ihnatko.

The push for new TVs has, for several years, been about how big the screen can get and how much thinner, lighter and cheaper they can be. But now the new trend is for televisions that are “smart,” or that operate more like a computer and less like the traditional set. Several manufacturers are promoting TVs that could run with Google’s popular Android operating system, for example, which is now seen on many smart phones and tablet computers.

Brusilovsky, a self-described “audio/video nerd” who has his eye on the Canon 5D Mark III, says he really likes where connected TV and tablets are going. “Although I think the focus should be more on the tablet experience, rather then having Facebook and Twitter built into the TVs,” he notes. “I try to get my hands on all the new technology that comes out, and I’m really excited about what VIZIO [which debuted a new 10-inch tablet at CES] has cooking.”

It is no coincidence that there is a big push toward smart TVs and tablets, Ihnatko adds. Companies have been trying to compete with the iPad since it was released in 2010, just a few weeks after that year’s CES. And the big rumor this year from Apple – which does not have an official presence at CES, but is the company all the other tech firms are competing against – is a web-enabled TV set being released sometime in 2012 or 2013. Companies “are not necessarily trying to beat Apple, but they want to be ready to have something else in the marketplace when Apple gets all the attention,” Ihnatko says.

Many of the products shown at CES will be in stores in the next six months, but don’t reach for your wallet just yet. Dealnews, a website dedicated to finding online shopping bargains year-round, says that most of the TVs will start to get cheaper in October and will be even less expensive a year from now, when CES 2013 gets under way. If this year’s new tablets aren’t an instant hit when they’re released, wait a few months and grab deeper discounts then, the site advises.

‘Two Halves of the Same Problem’

Although the news splash from CES will be about new televisions, computers and tablets, there’s value for the companies attending beyond the publicity. For the professionals who work at these tech firms, it may be the only time engineers and technical experts from competing companies can meet and sit down over lunch.

This kind of contact can breed innovation, Ihnatko says, and that can turn a casual lunch into the next groundbreaking tech product. “You never know what could happen a month or a year from now as the result of that lunch. It may have turned out these individuals had two halves of the same problem, and by sitting down together they discovered a solution.”

At its heart, Ihnatko says, CES is still a business-to-business trade show, where companies make deals to join forces and build products that they hope will take the market by storm.

“So often I’ll get a news release about a product that doesn’t have a price or a release date attached to it, but the company’s putting it out there to test the market and see if it can form a partnership at the show,” he said. “It’s one thing to sell a tablet directly; it’s another to get it in every AT&T and Verizon store across the world. That’s the kind of deal a lot of people come to CES trying to make.”