Selling Crafts at Street Fairs: Is that Tarantula Real?

Street fairs, like Crafts on Columbus in New York City, are a competitive market for small, independent craft businesses. Take, for instance, BugsdeluxT, a seller of bug-embellished t-shirts, which depends on craft fairs to showcase its unique fashion creations. And even though business is down during a tough economy, the artists-turned-vendors keep coming back for more. …Read More 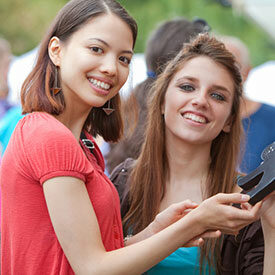 With the holidays around the corner, many city dwellers turn to outdoor markets to search for stocking stuffers and other seasonal gifts. Crafts on Columbus in New York City is one of many arts and crafts fairs in the Big Apple. Located just outside the American Museum of Natural History, the fair lasts for three weekends in autumn (and three again in spring), during which time about 100 vendors hawk their wares to tourists, museum visitors, dog-walkers, local residents and even celebrities.

Items range from jewelry to blown glass to creative clocks made out of various odds and ends. All products sold at Crafts on Columbus, run by the American Arts and Crafts Alliance, must be handmade in America. Even with the dominance of online shopping platforms — like Etsy.com, the Amazon of handmade wares — craft fairs are still a competitive market for small, independent craft businesses.

A New Way to Showcase Art

Simon Gaon co-founded the Street Painters in New York in 1977, a group of eight artists who painted scenes from the vantage point of the city streets. That same year, he also began the American Arts and Crafts Alliance. During this time, he was looking for new ways to display and sell his paintings. Gaon’s sister offered to help him sell his works at the Washington Square Art Show (a fair that still exists today). After participating, he founded his arts and crafts organization as a way to supplement his artist’s income. As Crafts on Columbus rose in popularity, one of the jewelers working at the fair saw the same window of opportunity as Gaon. Today, that jeweler, Art Rider, is one of the largest promoters of craft shows in New York, through his company, Artrider Productions, based in Woodstock, N.Y.

Crafts on Columbus is home to typical vendors, such as silversmiths and knitters, and occasionally features peculiar oddities. On a recent fall afternoon, one vendor was selling candlesticks made of everything from stacked pottery to Barbie doll heads. Another sold t-shirts adorned with transparent vinyl pockets that were filled with (alarmingly realistic) plastic bugs: spiders and lizards for kids who like creepy crawlers, and butterflies and ladybugs for gentler sorts.

The original t-shirts are the brainchild of Alex Ngai, founder of BugsdeluxT and a craft fair regular. Ngai says that the idea was inspired by his work in museums — the vinyl “windows” do resemble mini display cases. It is almost too fitting that the fair is located outside a museum that focuses on nature.

When Ngai started making his product 14 years ago, he had some difficulty during the development stage. “I experimented with different things. First I laminated, and it didn’t work. Finally, I stumbled upon the answer. It took three months, and at first it was a mess,” he jokes.

Like many crafters, Ngai makes his product during the week in his Brooklyn workshop and sells at fairs during the weekends. His long-sleeve shirts retail for $30 and his short-sleeve ones for $25. In order to increase his in-person sales, he also hires people to sell at other markets while he works Crafts on Columbus. Ngai says that arts and crafts fairs are necessary for his business because he sells more in person than online. “It is not a very searchable item,” Ngai adds about why his website does not receive a lot of traffic. “It’s something totally new.” People are definitely taken by the uniqueness of the product when they see it up close.

Navigating the craft fair business, however, takes a lot more time and effort than one would expect. Sellers arrive to pitch their tents at 6 a.m., and most stands are not broken down until around 7 p.m. It is a long day even if you don’t commute from outside of the city, which a lot of artists do. One couple that makes handmade soaps in Philadelphia had traveled to New York for 11 straight weekends to sell at various fairs around the city.

Weather can be a determining factor, as well. Typically, rain deters passers-by from slowing down to browse the stalls. At the same time, sunny days do not guarantee sales. As one craft artist told me, “If we had it down to a science, we’d all be rich.”

‘I’m Cutting Back Due to the Price’

Recently, Ngai has been complaining about lower sales due to the economic slump. The only vendors who haven’t experienced a decrease in sales are jewelry-makers, according to Ngai. “People are always willing to spend on jewelry, but luxury for children is not necessary in the eyes of parents,” Ngai says about why his t-shirts are not flying off the rack. Jewelry vendors make up the majority of sellers in Crafts on Columbus, and more and more jewelers ask to participate every year. Because individual pieces are more expensive, jewelers also need to sell less to make a profit, and participating in street fairs is not cheap. A full-sized stand at Crafts at Columbus costs $600 per weekend. According to Ngai, “The costs are getting harder [to cover]. I’m already cutting back on a lot of street fairs due to the price.” After it pays fair employees and overhead costs like rent to the city, the American Arts and Crafts Alliance makes about $300 per booth.

The craft fair business, in general, is shifting because of a proliferation in weekend activities and that ever-present overseas competition from stores that sell imported items similar to handmade items – at much lower prices. “About 20 years ago, craft shows were very trendy, but lately they are not so unique in New York City,” says a partner at the American Arts and Crafts Alliance who would not provide her name. Currently, the alliance only runs one show, but in the past, it hosted multiple indoor events at Columbia University, New York University, Universalist Church and several other locations around the city. Seasonal markets have become a source of competition as well, like the ones that spring up in November in Grand Central, Bryant Park, Columbus Circle and Union Square. Many crafters also find that such markets are lucrative spots for doing business.

Meanwhile, the same crafters keep coming back to Crafts on Columbus and many other city fairs, and more inquire about the fair every year. In the end, these die-hard craft fair vendors deem the costs worth it. Despite the long hours, inclement weather and grueling commutes, the overall atmosphere of the fair is always welcoming, and the artists are (for the most part) friendly – and always on the look-out for some word-of-mouth marketing. Ngai is known to hand out free BugsT’s to unsuspecting passersby — complete with life-sized tarantulas.

Who is Simon Gaon?

What is the state of the craft fair business in New York City these days? What factors are contributing to its condition?

What are your thoughts about artists/crafters as business people? Do you see this as a legitimate enterprise? Why or why not?

One comment on “Selling Crafts at Street Fairs: Is that Tarantula Real?”

The Pandemic Effect: Is the Office Experience Changing?