In August 2014, Michael Sayman was hired as Facebook's youngest full-time software engineer. His journey to a job at one of the world's most high-profile companies began with a simple love for coding that took him farther than he could have ever dreamed.…Read More 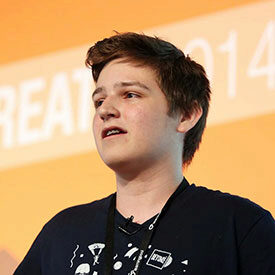 In June 2014, after graduating from high school in Miami, Florida, Michael Sayman headed to one of the most coveted internships on Earth: Facebook in Menlo Park, Calif. You might think Sayman would feel intimidated or even underqualified as a teen in a sea of Silicon Valley tech execs. But actually, one of his greatest insecurities had to do with his teeth — he still wore braces. “I try to keep my mouth closed during meetings because I don’t want people to see them and not take me seriously,” he told Bloomberg Business last July.

Clearly, those braces did not have a negative impact on Sayman’s cred with his colleagues, or on his job performance. One month later, in August 2014, he was hired as Facebook’s youngest full-time software engineer. Sayman, now 18, is still beguiled by it all. “Working at Facebook is incredible. It definitely is a dream,” he says. “Sometimes, I have to remind myself that this is actually a reality. And for all of it, I’m truly grateful.”

Sayman’s journey to the heart of Silicon Valley began with his love of the Disney game Club Penguin, which he discovered when he was 11. Club Penguin is a so-called massively multiplayer online game (MMO) involving a virtual world and different online games and activities. “I started reading blogs about the game and then eventually wanting to [write] my own [blog about the game],” notes Sayman. “I never saw programming as something I wanted to learn off the bat. Programming was just the tool I used to build what I wanted. I went on wanting to create a mobile-app version of my blog, and then after my app got more downloads than my website ever got views, I decided it was time to shift my focus to [developing] apps.”

Sayman convinced his mom, Cristina, to loan him $100 to register for the iOS App Store in order to sell his product. If he couldn’t make the money back, he promised he would work in the chicken restaurant that she and his father owned and operated.

When he was 13, Sayman taught himself how to code by watching free web tutorials and reading blogs. His high school didn’t offer computer classes. Sayman says that wasn’t necessarily a bad thing: “The Internet is one of the best options anyone can have at their disposal to learn. I was able to kick-start my experience in the app world. Without the Internet, I probably wouldn’t have been able to do it myself.” Ultimately, he developed hundreds of different apps, some hits and many misses.

Then came 4 Snaps, the app that literally changed his life. One day, Sayman saw his sister playing a game that she made up with her friends involving photos reflecting a common theme. Inspired, he used his coding knowledge to build an app around this concept. 4 Snaps, released in the iOS App Store in August 2013, is a social picture snapping and guessing game in which users take turns taking pictures and guessing words. The first player picks a word and takes four pictures related to that word. He or she then sends the game to a friend who has to guess the word. The game quickly had hundreds of thousands of downloads and became more popular than apps like Twitter, Starbucks and Garageband.

When Facebook noticed 4 Snaps soaring up the charts (Sayman had used Parse developer tools to build his app, and Facebook acquired Parse), the company invited Sayman and his mother to Menlo Park to meet CEO Mark Zuckerberg. The internship soon followed – and then the full-time position he holds today.

While Sayman can’t talk much about his actual day-to-day job responsibilities at Facebook due to privacy rules, the company has had this to say about its software engineering team: “Our development cycle is extremely fast, and we’ve built tools to keep it that way. It’s common to write code and have it running on the live site a few days later.”

Aside from software engineering, Sayman is learning other important life skills in the post-high-school work world. “It’s been very different from high school,” he says of his time working at Facebook. “I used to be so worried about taking tests and quizzes in class and having to make sure I knew all the answers — whereas now, I wake up without that. Being considered an adult is very interesting in the new responsibilities that it brings, like paying for taxes, having an insurance card and so much more. I’m just getting started figuring it all out. I wish they taught us these things in school. Knowing the style of a specific fresco in art history doesn’t help me pay my taxes.”

Learning the nuances of personal finance has been an important theme for Sayman throughout his teenage years. In fact, his lucrative app sales helped save his family’s fortunes. In 2010, his parents lost their small business and had to foreclose on their house due to the economic crisis. They were even considering a move back to their native Peru. With Sayman’s added financial support, they moved into a smaller apartment and made it work. “It was very tough to see my parents struggling,” says Sayman. “I’ve been able to help them out since I first started on these apps around the age of 13. Things have never been perfect, and the amount of stress on my shoulders was at times too much to handle. Instead of focusing on classes, I would be worried about paying the bills and helping to pay my sister’s [private school] tuition.”

At the same time, he says it has been “equally rewarding.” He singles out his family financial contributions as his proudest accomplishment to date – and this from an 18-year-old who landed a job at Facebook. “Pitching in and helping my parents was incredible for me. I’m truly proud of it and proud of having parents like the ones I have,” he adds.

So how does Sayman think he ended up at such an incredible entry-level job? What mattered most for him, he says, is his “ridiculous determination” to succeed. And yes, he does plan to go to college someday for computer engineering. Still, he doesn’t want other teens to think his opportunity would only happen once in a million years. “I’d say that when it comes to something like this, it’s mostly up to you,” he notes. “My goal was never to do any of this. More than anything, my goal was to play Club Penguin.” From there, he’s acquired formidable expertise in a career – and a job — that he loves.

Michael Sayman says, “The Internet is one of the best options anyone can have at their disposal to learn.” Another teen tech entrepreneur featured on KWHS, Jake Coppinger, said something similar: “Mine the Internet, and teach yourself what is missing from school.” Do you agree with their approach to self-teaching and following their passions? Why or why not?

Why do you think Michael has been so successful?

What did you learn from this article about personal finance? How might that better prepare you for your future?