Turbine Test-drive: Preparing for Jobs in the Green Economy

Wind turbines, solar panels, fuel made from algae -- alternative energy is hot right now and getting hotter. Students around the country are learning how to navigate the green economic terrain as they acquire skills for jobs with an environmental purpose. …Read More 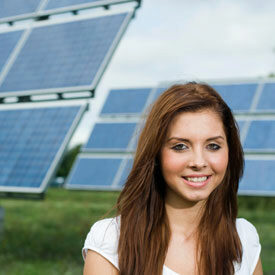 For as long as she can remember, 16-year-old Holli Gay of Union City, Michigan, has cared about the environment. It wasn’t until she had the opportunity this past summer to participate in the Michigan 4-H Discovery Camp at Michigan State University that her interests evolved into career goals. “I was really inspired by our visit to an energy wind farm,” says the junior from Union City High School. “My dream is to someday design wind turbines.”

As similar programs pop up in schools and communities around the country, more teens like Gay are considering careers in what is known as the green economy, which has jobs in everything from alternative energy to green building and water management. Much of the focus is on sources of alternative energy. An April 2009 article in Newsweek said 110,000 new jobs will be created in solar energy by the end of 2010 and the wind sector will create 185,000 jobs in the next three years. Those numbers are projected to keep on growing.

Josh Clearman, a science teacher at Key West High School in Florida, is passionate about giving students a foundation in alternative energy. Four years ago, he turned the school’s auto shop into an Alternative Energy Center, giving students a chance to learn about renewable energy firsthand, such as using biodiesel to power a school bus and participating in a wind turbine pilot program. “It’s really important for us to learn about this stuff now,” says Sterlin Michel, a senior in Clearman’s class. “We are the future, and keeping the environment safe is going to be up to us.”

Students at Fairfield High School in Fairfield, Montana, are also excited about the newest elective available to them this year — an alternative energy class — that will introduce them to everything from biofuel and hydroelectric to wind and solar energy. “Our goal is to help students think and work outside the box,” says science teacher Raimund Hahn. “Hopefully they will go on to college to pursue careers in green energy and ultimately bring their skills back to the area.”

Trace Brady, a junior at Fairfield, is looking forward to the hands-on projects he will be working on, including building one-meter-tall wind turbines, designing different blades and testing their wind speeds. “I think the class is going to be a great way to learn about other career opportunities,” he says.

Ryan Toussaint, 18 and a senior at Lahser High School in Bloomfield Hills, Michigan, didn’t let the fact that his school had no alternative energy offerings get in the way of his fascination with solar energy. He focused his semester-long independent study on custom-designing a grid of six solar panels now installed on the roof of his school’s science wing that could eventually supply 20% of the wing’s lighting. “This project really helped me finalize my career plans,” says Toussaint, who hopes to study engineering and solar panel technology in college.

When Jake Buckhaults of Hawk Springs, Wyoming, was growing up on a beef farm, he always enjoyed hands-on work and being environmentally conscious. While considering his post-high school options a few years ago, he began noticing wind turbines installed on nearby farms. “I was curious what all went into putting them up and maintaining them,” says Buckhaults, now 20. “I came across a program at Laramie County Community College to train as a wind turbine technician.”

For the past three years, Laramie County Community College in Wyoming has offered an associate degree in wind energy, training students to be wind turbine technicians. “By learning how to convert air into usable energy, you’re not just helping yourself out, but you’re helping wildlife, the environment and the community at large,” says Buckhaults.

The first question Professor Ruth Douglas Miller asks students enrolled in her wind and solar energy systems engineering class at Kansas State University (KSU) is what sustainability means to them. “Their answers are all along the lines of using energy wisely,” says Miller. “The fact that they come to us already tuned into thinking green is a very good thing.”

KSU is among the many higher education institutions placing more of an emphasis on alternative energy education in response to the growing number of teens entering college in pursuit of green careers, as well as companies looking for graduates with skills in renewable energy. Illinois State University also has a renewable energy major that is so popular there’s currently a waiting list. Miller says that graduates of her class are getting jobs in research and development, consulting or the utility industry, which is hiring aggressively in this field.

As the economy continues to struggle, many companies involved in solar, wind, biofuels, energy efficiency, green building and other sustainable efforts are well positioned for growth, says Jacob DeDecker, leader of the 4-H Discovery Camp at Michigan State University. “It’s definitely an emerging industry,” adds Clearman. “It just feels like we’re on the verge of something huge.” Or, as Union City High’s Gay says, “With how fast green careers seem to be growing, I know I’m picking a good field to go into.”

Dress for Success: Crisp Shirts and the Truth About Corporate Casual