Mauricio Rostán, a native of Uruguay, discovered the world of business at age 15, when he participated in the Youth Enterprises program organized by Desem, a non-profit organization that provides incentives for aspiring entrepreneurs. Rostán talks with Knowledge@Wharton High School about his business experiences and the value of sharing your ideas with people you trust. …Read More 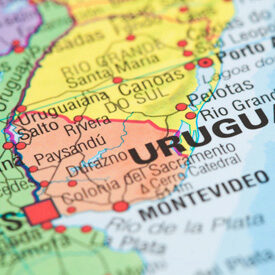 Mauricio Rostán was born in Uruguay, the smallest country in South America, with a population of only three million. At the age of 15, Rostán discovered the world of business, when he participated in the Youth Enterprises program organized by Desem, a non-profit organization whose goal is to provide incentives for people with entrepreneurial spirit. On that occasion, Rostán set up a successful company that sold photos [of students] finishing their secondary school careers.

Desem may have sparked Rostán’s entrepreneurial spirit, but he already had that nose-to-the-grindstone ethic in his blood. He was born into a working-class family in a small city where the importance of hard work and social responsibility had always been emphasized.

Today, the 30-year-old entrepreneur heads two companies — one involved in training and the other in technology. In this interview, Rostán talks about his experiences as an entrepreneur, starting from his adolescence, and extols the virtues of networking.

Knowledge@Wharton High School: How did you arrive at Desem, and in what way did you participate in its initiatives?

Mauricio Rostán: I was in my fourth year of high school in my hometown when I heard about the Youth Enterprises program run by Desem in Montevideo, the capital of Uruguay. My family supported me, making the effort so I could travel and participate [in the program] with some other friends. My four brothers and I were born into a working-class family in Juan Lacaze, a blue-collar town in the interior [of Uruguay] whose 14,000 residents stress the importance of hard work. Everyone in that city collaborates to work for what they want, rather than just waiting for things to happen.

KWHS: What does the Youth Enterprises program consist of?

Rostán: It provides experience for developing a company from scratch, and then taking action to make money from it. This includes both developing a product and selling it. Along with my colleagues, we created a very entertaining venture called “Unforgettable Memories.” It involved getting students to sell the photos that were shot at the end of their high school careers to other students in their classes, with this added value: The photos were all shot with a Polaroid camera, and they came with a wooden frame plus a card with a phrase from a famous song. We calculated that there were some 900 potential customers in schools and, thankfully, the company made profits. We were rewarded for achieving higher sales.

Rostán: It put me in touch with a lot of entrepreneurs and mentors from successful companies who guided me. That’s when I realized that this was what I wanted to do in the future. I liked meeting entrepreneurs, and participating in their conversations about marketing. So when I began my first professional job at a firm in Zonamérica (a free trade zone in Montevideo), I joined Desem as a senior advisor, which means being a volunteer in programs and contributing your expertise.

KWHS: How did your professional career get started?

Rostán: When I graduated from high school, I enrolled in communication sciences at the University of the Republic [in Montevideo]. By the time I was 20 years old, I was already working in Zonamérica and I had started a career in that organization. I also met my first partner, Mauricio Escobar, with whom I created our first venture, called Motiva.

KWHS: What is Motiva all about?

Rostán: Motiva is a consulting firm that specializes in HR [Human Resources] training and corporate events that have an experiential and entertainment component. That is to say, we develop internal skills through games, teamwork and activities that emphasize motivation and leadership. Another person who got involved in that project was Lucia Maitán, with whom we held meetings on the beach to polish ideas and establish Motiva.

KWHS: What is your technology-related enterprise?

Rostán: It is called UYCloud, and I am still developing it together with three other partners. This company will be devoted to developing innovative applications for social networks like Facebook in what is known today as cloud computing. Currently, UYCloud is putting together a strategy game for Facebook. But we are looking for funding because it is a very ambitious process.

KWHS: What is it like being an entrepreneur in South America?

Rostán: An entrepreneur is a sort of profession, and there is no reason to be afraid of it. Because we are Latinos and South Americans, we are characteristically passionate about things. We have that in common, and whenever a Uruguayan undertakes a project, it [inevitably] moves forward. In this country, there are cases of very young people who [already] have their own companies. The negative side is that at times there are a lot of bureaucratic barriers, so you have to be patient and try hard in order to make progress.

KWHS: What recommendations would you give to future generations?

Rostán: The first thing is not to be alone as an entrepreneur, enclosed within your four walls. You have to share your ideas with people whom you trust, and join organizations like Desem, where there are a lot of people who are eager to do new things, and who have had successful experiences.

Many products emerge from synergy and teamwork, but good ideas have to be put to the test. If we don’t tell anyone about them, people can’t make a contribution. When you share ideas with other colleagues who are entrepreneurs, you can achieve a core of trust. For example, someone can provide advice about legal or technological matters. My recommendation: You have to do a lot of networking. Beyond that, [you should] finish college, which is something that I have yet to do.