While high school freshmen Hunter Willis and Akshay Chalana have never met, they have similar goals. Both are starting businesses -- inspired by the economic crisis of the past three years -- to improve the lives of people hurt by the recession. Their ideas couldn’t be more different.…Read More 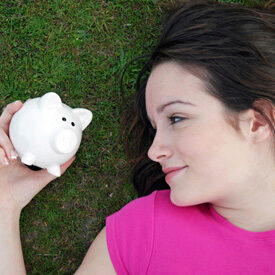 While the country’s bad economy is forcing a lot of people into finding a new line of work, two enterprising high school freshmen on opposite sides of the country — Hunter Willis and Akshay Chalana — are seeing opportunity where others see hopelessness. Both have plans to start companies that were inspired by the recession that began in 2008.

A recession is the term economists use to describe a significant decline in economic activity across the country that lasts more than just a few months. A group of economists involved in the National Bureau of Economic Research, or NBER for short, is in charge of monitoring the economy and deciding when we’re in a recession.

NBER says the most recent recession, which many called the Great Recession, ended in June 2009, although the economy has been sluggish ever since. A lot of people are out of work – the unemployment rate has been stuck for several months at a high 9.1%, with 14 million people out of work as of early October 2011 — and many are still losing their homes because they cannot afford their monthly mortgage payments.

When economic times are tough, people often retreat and wait for better days. Innovators, however, look for opportunities. Willis, a freshman at The Masters School, a boarding school in Westchester, N.Y., says he is starting a company called Detroit Connection, which aims to bring manufacturing and shipping jobs back to the besieged Michigan city. Although Willis is from the Boston area, he has family connections in Detroit – his dad was raised there — that make him want to help the city. Detroit depends on manufacturing, especially automobile manufacturing, for its economic health, and Willis’s uncle works in the Detroit auto industry.

Detroit has been hit particularly hard by the recession, with thousands of vacant houses left to decay after owners could no longer pay their mortgages. The largely industrial city has been in decline for years due, in part, to the struggling auto industry. The recent recession just made things worse – much worse. Some reports that came out during this time suggested that nearly 1,000 people a month were leaving the city to find better opportunities.

Through his company, Willis wants to help Detroit manufacturing companies save money by making connections for them with shipping companies in the area and setting up business relationships between the two. The idea is to let the manufacturers work on making a good product, while at the same time increasing business to shipping companies near Detroit. “If you’re making your own products and need to ship them, then you can keep working and we’ll negotiate for you,” he says. “It’s not going to be as expensive as putting someone on staff to do that.”

Willis plans to tap his family’s entrepreneurial expertise – particularly that of his grandfather, Irwin Arginsky — to make his business a reality. “My grandfather is the owner of SBI Enterprises, the company that invented the Pogo Stick and the Flybar. Over the years, he has made many business trips to factories abroad and in the U.S., and met with their management,” notes Willis. “I know that with his knowledge about how to have meetings with these types of business men and women, that he could be one of my most valuable resources.”

Although Willis is now based on the East Coast, he plans to manage Detroit Connection through Skype, email and over the phone when it gets off the ground, ideally next year. He is already using social media, namely Twitter and Tumblr, to “create heat” about fixing Detroit. He is also joining chambers of commerce in both New York and Michigan.

Teaching the Value of Money

Akshay Chalana wants to help improve the economy, too, but in a different way. Chalana’s company, MoneySense, will use a computer game similar to the Sims simulation games to teach high school students about personal finance, saving and budgeting, topics that he has seen people struggle with during the recession. MoneySense, says Chalana, will educate future generations to make better financial decisions and to avoid the poor consumer choices that helped to fuel the economic crisis.

While many other companies teach personal finance to students, Chalana believes that his computer game, paired with classroom learning, will help the topic be more relatable to teens, many of whom don’t have to worry about budgeting their money to pay bills. “We will put students’ characters through different challenges in life. Using the knowledge they gained in their class courses, students will then be able to work through the situation,” he notes.

Chalana, a freshman at Eastside Preparatory School in Kirkland, Wash., says his parents have taught him the importance of saving and budgeting money, but not a lot of his friends have had similar conversations. It’s why he thinks his company can help high school students gain that knowledge. “That’s my goal with this game, to make something that will both teach the value of money and get them to learn,” even if they don’t remember most of it when they get out of school.” The bigger problem, he adds, “is that they aren’t getting the education.”

Chalana recently won $1,000 in the Social Innovation Fast Pitch competition in Seattle, which he’s using as seed money to get MoneySense off the ground as a nonprofit company. He’s hoping to partner with other companies, including banks, to get more support. He says he will pay to get the computer game developed, and then work with teachers at his school to develop the classroom work. He wants to begin trying the system out at his school next fall. “I want to start this in Seattle, but hopefully it will spread from there,” he says.