Thore Aalvik is already a veteran app developer at 19. The techno-teen, with a penchant for equestrian acrobatics, sat down recently with Knowledge@Wharton High School to talk about his successes and failures as an app developer, and why budding tech entrepreneurs should travel, enrich themselves culturally, and seize the opportunities that come their way.…Read More 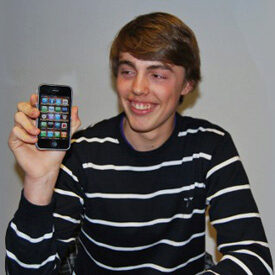 When he was 17, Thore Aalvik developed an application that allowed iPhone users to search for flights anywhere around the world. That application was translated into several languages but ultimately did not become available in the Apple Store due to financing problems. Aalvik, now a 19-year-old student with both Spanish and Norwegian citizenship, was undeterred. He ultimately created and introduced other applications into the Apple Store, which today provide him with a steady income stream.

In a conversation with Knowledge@Wharton High School, Aalvik talks about entrepreneurship and what he expects from technology in the future. His story illustrates how far behind the times some Spanish firms are when it comes to developing social media and new platforms for technology.

Knowledge@Wharton High School: How and why did you become an app developer?

Thore Aalvik: Ever since I was a little boy, I have always been filled with curiosity. I have always tried to do different and new things. I have competed internationally as an acrobat in an equestrian sport knows as Volteo that is not very well known in Spain. It was an Olympic sport in 1920.

I believe that experience taught me to express myself and provided my foundations in the world of the Internet. HTML was a simple language to learn, and software such as Dreamweaver helped me understand designs and structure, and you could even use templates. By the time I was 12 or 13 years old, I already knew a little HTML and I had already done some websites for family friends. It seemed incredible to me that companies charged a thousand euros [about $1,285 USD] for a website that a young person might create in one afternoon.

At about that time, I was on an airplane flight when I read an article about the large amount of money that people were earning by selling [Internet domain names] in English. I had been thinking about domains in Spanish that might not be registered. Naturally, I was not the first person to do so because premium domains were already being registered. Still, I carved out a small niche market that way by registering some domain names. In 2008, I also sold my first domain name, Macrofiestas.com, for €150 on Sedo.com, a great platform for buying and selling, and for domain parking (where you don’t develop a website but, in the meantime, you place ads [on that domain] in order to make some money).

This was critical for learning about how people make money with domain parking, and about buying and selling parking domains. [I also learned] how having a good domain adds great value to development and positioning. Starting from there, I learned more about web development, the use of scripts and servers. And then mobile platforms emerged, and it seemed like a great opportunity for me, since it was something that grew very rapidly and had arrived to stay. You have to seize the opportunities [that come your way].

KWHS: Describe the process of developing your first app.

Aalvik: The first thing you need is to register yourself as an iOS developer, which costs $99 a year (https://developer.apple.com/programs/ios/). During that period, you can send in as many applications as you want. In order to program, you have to download Xcode from Apple, which can only be installed on [Apple computers]. Once you’ve finished that process, you compile [the application] and send it to Apple via its website. It is also possible to send it for iPads and iPhones. The approval process on the part of Apple takes about a week. Not all of the applications are accepted. The user chooses the price for the application that he wants to sell. [He also decides] when and on what platforms he wants to sell the app. Apple gives you 70% of the profits and it keeps the remaining 30%. Another possibility is for you to create free applications and make money from advertising [that is placed on them].

In early 2010, I developed an air travel application. Although it never wound up in the Apple Store, I tested it on my telephone. The name that they were going to give it was “Flights,” since that name had not been used. Everything was going along well until the company that uses the API [Application Programming Interface] told me that I would have to pay [a fee] based on the volume of requests for searches that were conducted on the app. Usually APIs are free, since both parties benefit from them, but some companies make you pay for them beyond a certain volume of requests [made on those sites by web visitors]. This is one of the flaws in the process — access for youth to sources of funding. In 2010, I also collaborated on a [Spanish-language] business book called The IT Generation.

KWHS: Has your age ever been a problem during your entrepreneurship journey?

Aalvik: Age has never been a problem except with access to financing. Since Apple has a closed system, in which it controls everything, it doesn’t allow you to use other platforms that help you in the programming — except until a short time ago. The rise of HTML5 has allowed the growth of companies like PhoneGap, which was acquired by Adobe. Companies like PhoneGap [a mobile development framework] enable you to create a single HTML and JavaScript code and convert them to different platforms like iOS, Android, Symbian, Windows, BlackBerry, etc.

KWHS: Despite your initial failure, did you keep developing applications?

Aalvik: I wound up sending 10 applications to Apple, but only six are online. My income from them varies from month to month, but it usually averages about 300 or 400 euros [about $450 USD]. The vast majority of the profit comes from the U.S. and Australia. Some [of my apps] in the English language store are San Fermin and iBob Marley Quotes. Another two applications – El Hombre de Negro [Man in Black] and Piropos de Obrero [Worker’s Flatteries] can be found in the Spanish store.

It may seem strange, but in February 2011, I realized that Expansion, one of the biggest financial newspapers in Spain, did not have any web application. So [we created] an application that collected the newspaper articles from its RSS [Really Simple Syndication, an XML format for syndicating and sharing content online]. In one day, that app rose rapidly to ninth spot, and within hours it wound up at number one in Spain’s news category. The legal department [of Expansion] sent me an email saying that the app had to be removed from the Apple Store. I removed the application and offered to collaborate with them, but they didn’t even respond to my proposal to collaborate. Few companies realize how slowly they are moving when it comes to [establishing] social networks and new technology platforms.

KWHS: What are you focused on these days?

Aalvik: I have dual nationality (Spanish and Norwegian), although I was born in Madrid and have lived all of my life there, except for one year of high school when I studied in Michigan. I am currently studying business administration and management at the BI Norwegian Business School in Oslo, Norway. I will finish my courses within a year. Here in Oslo, the coursework lasts three years and is the equivalent of four years of courses in Spain. I work in a social media company, and I’m creating a company that sells T-shirts. I am the public relations and events organizer for the International Student Association at my university. At the moment, I have moved away somewhat from programming applications, although I am contacting companies to make my own high-technology product, which I prefer not to talk about yet. It is in its early stages, so I prefer to say nothing until we have at least some prototypes.

KWHS: Will you stay in this industry?

Aalvik: Yes, but I see my future trying to create services and products that bring technology closer to the humanities. If current trends continue, children will know how to use a tablet before they learn how to write by hand. What’s more, Apple announced recently that we are in the post-PC [Personal Computer] era. Nowadays, we are creating products that are, of course, impressive and that help improve our lives, but sometimes we forget the products that we have always used, and that they also can incorporate technology. I would love to devote myself to something that is between the humanities and technology and has a positive impact on society.

KWHS: Is it a good idea for young entrepreneurs to develop applications?

Aalvik: Yes/ Although it is more difficult because of competition, there are now many tools that facilitate learning and provide opportunities for the vast majority of people. And yes, you can earn an income by selling simple applications that are not the most successful.

KWHS: What recommendations would you make to teens who want to develop applications?

Aalvik: You should pursue lots of the business opportunities that lie ahead, travel and enrich yourselves culturally with all the information that exists today, and believe that you can do whatever you think about doing. Everything depends on how much time you spend on it. Personally, I have learned that I can do more things than I imagined, and I am still young!

What did Thore Aalvik read about on an airplane and how did that fuel his entrepreneurial spirit?

What was the first app he developed and where did he sell it? Did he develop others?

What has shown this young entrepreneur that businesses, especially in Spain, are behind in the social media revolution?

Have you developed an app? Post your comments to the story and on our Facebook page at http://www.facebook.com/whartonhs.

Building a Network: ‘One Simple Connection Can Lead to So Much’

Venture Capital Investing: What It Is and Where It’s Headed