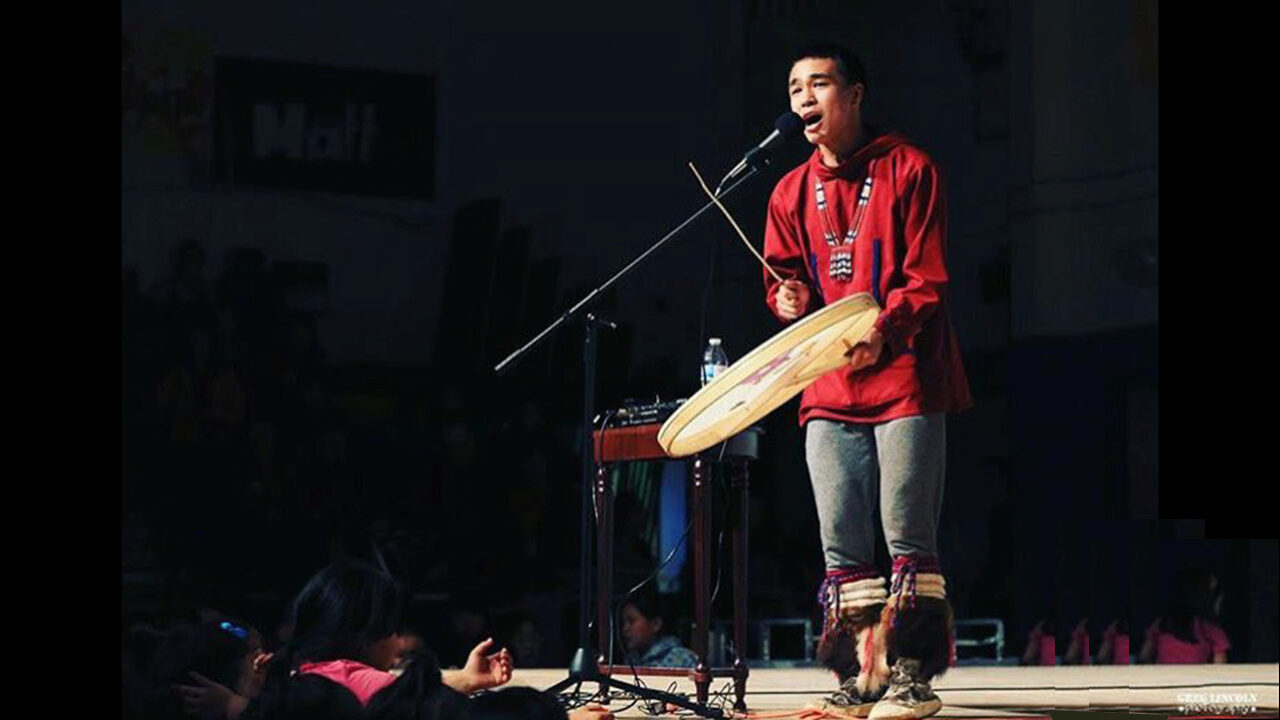 “Waqaa” – that’s how you say “hello” in Yup’ik. It’s an Eskimo-Aleut language spoken by just 10,000 people in Alaska, including 18-year-old Byron Nicholai, who posts himself on new media singing Yup’ik songs and doing traditional drumming. His fame really took off when he posted a song he wrote called, “I Am Yup’ik,” on his Facebook page “I Sing. You Dance.” Soon after, the video gained attention from people all over the world. He now has a following of more than 27,000 fans on Facebook (he started the page when he was 14) and nearly 650 subscribers on his YouTube channel.

Nicholai is taking an innovative approach to preserving an indigenous language and cultural traditions like Yup’ik song and drums. Through technology that he and his peers know well and use often, he’s making Yup’ik cool again for the younger generation. The Eskimo language is in danger of becoming extinct, like one of its sister languages Sirenik, which died off in 1997. Nicholai is aiming to preserve the culture with the help of modern technology. He composes and sings Yup’ik tunes, mixing them up, altering beats, adding funny lyrics and layering melodies. He also plays his Yup’ik drum, known as a cauyaq, the drumskin of which is usually made out of the stomach lining from a walrus or other mammal.

His virtual audience is far bigger than the population in his hometown. Nicholai hails from Toksook Bay, Alaska. Population size is around 670 people and “everyone pretty much knows each other,” he says. It’s a rural village on Nelson Island in western Alaska, surrounded by the Yukon Delta National Wildlife Refuge, near the Bering Sea.

When “I Am Yup’ik” went viral, people in his town “didn’t react to it as much as people outside his village,” he says. People were used to seeing him all the time but as his fame grew, his hometown has “been quite supportive” and folks “thought it was a big deal” that his work was being heard by people from all over the world. He adds, “I don’t know how far I would’ve gotten without the support of people all over the world, not just in my village.” He reaches a wide global audience, inspiring cultural music lovers both young and old.

He says that he now hears younger Yup’ik kids singing the songs and dancing as they embrace their roots. “There are a lot of Yup’ik speakers here in Toksook. By making my videos, I didn’t realize I was helping to keep our language alive,” he adds.

This May, Nicholai and 12 classmates will graduate from Nelson Island High School, which has a total of some 70 students. He credits his school with fostering a sense and appreciation for Alaska Native culture. “The high school Native dance group at the school has always been popular,” says Nicholai. For seven years, he’s been a part of the Nelson Island yuraq group, performing traditional Eskimo dancing and drumming.

Last fall, Nicholai recorded his first album with 12 songs, named after this title track “I Am Yup’ik.” It is sold through iTunes, Amazon, Google Play and Spotify, as well as directly from Yuk Media, a Yup’ik company that produced his album. With the money he’s made from record sales, he’s bought CDs and recording equipment. With a loop station (an electronic musical gadget that loops music phrases throughout a song,) he’s experimented with Yup’ik songs and drumming. Mixing Yup’ik melodies with beatboxing also helps him reach a younger audience. He hopes to record another album.

However, generating his own income doesn’t get him out of doing his chores. “Mom still tells me take the trash out to the dump. I’m living with my mom, and you have to listen to her,” he says.

Last year, Nicholai starred in a short film, titled I Am Yup’ik, about a teenage Eskimo boy who braves an Alaskan tundra to compete in an all-Yup’ik basketball tournament, which premiered at the 2016 Sundance Film Festival in Park City, Utah. While at Sundance in January 2016, he performed at the Music Café.

He’s also been selected as an Arctic Youth Ambassador, where he joins other high school students from all over Alaska to discuss community concerns, like climate change. Nicholai greeted Secretary of State John Kerry in August 2015 at a kick-off summit in Anchorage, Alaska, and has since continued to be, as Kerry has called him, an “Arctic steward” of his culture, land and resources.

In his spare time, Nicholai goes hunting and drift fishing for salmon, vital for his village’s subsistence economy. Drift fishing involves casting a weighted line upstream and letting the current pull the fishing line along the bottom of the riverbed while the angler is stationary from shore or an anchored boat. He hopes to teach his younger brothers these important Eskimo traditions, since his father is no longer in picture, he says in a video from the Alaska Dispatch News.

In the fall, Nicholai will start his freshman year at the University of Alaska Anchorage, where he’ll major in elementary education and minor in Alaska Native studies. His successful music career has convinced him even more that he wants to continue to share the beauty and spirit of the Yup’ik language and culture by teaching in a rural village, according to a KNOM radio report.

“It doesn’t matter where you come from. You just have to make a change, you have to keep trying. I don’t really think of it as marketing or business. I just keep sharing my videos,” says Nicholai.

What is culture? How would you describe Nicholai’s culture and lifestyle?

How might Nicholai’s life be different if he didn’t have access to the latest technology? Other than getting his songs out there on the Internet, what has technology done for him and for his traditions?