It was a week of inspiring innovation at the David L. Lawrence Convention Center in Pittsburgh, Pa. More than 1,500 high school students considered the world’s brightest young scientists took part in the Intel International Science & Engineering Fair (ISEF) 2012 on May 13-18. They shared ideas, showcased cutting-edge research and inventions and competed for more than $3 million in awards. KWHS sat down with fair attendee Catherine Wong to discuss making a global impact through biomedical engineering. …Read More 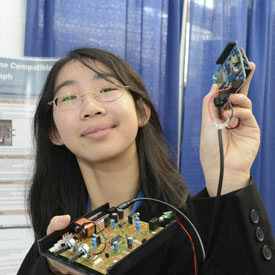 It was a week of inspiring innovation at the David L. Lawrence Convention Center in Pittsburgh, Pa. More than 1,500 high school students considered the world’s brightest young scientists took part in the Intel International Science & Engineering Fair (ISEF) 2012 on May 13-18. They shared ideas, showcased cutting-edge research and inventions and competed for more than $3 million in awards.

The featured projects were as diverse as the attendees, who represented some 70 different countries. Take, for instance, 15-year-old Jessica Sarah Lauren Garret, a sophomore at Telopea Park School in Canberra, Australia, who showcased her “Environmental Factors Influencing Post Stroke Recovery” research. Nathaneal Graham Christenson, 16 and a sophomore at Chengdu International School in China, presented his “Webcam-based Fingertip Detection” technology. And Trisha Ramsdell and Hunter Ward, both 16 and juniors at Kalamazoo Area Mathematics and Science Center in Kalamazoo, Mich., offered an “Analysis of Cis, Trans-Fat Content in Various Franchises’ French Fries,” concluding that McDonald’s French fires are the unhealthiest and Burger King’s are the healthiest.

The first place Gordon E. Moore Award of $75,000 at this year’s international fair went to Jack Andraka, 15, of Crownsville, Md., who devised a new method to detect pancreatic cancer.

Catherine Wong, a junior at Morristown High School in Morristown, N.J., was one of the promising young scientists invited to show off her high-tech skills at Intel’s ISEF – specifically her “Design and Evaluation of a Cell-Phone Compatible Wireless Electrocardiograph.” Knowledge@Wharton High School spoke with Wong to learn more about her potentially life-saving biomedical engineering technology — which won her special recognition by several organizations, cash rewards and a scholarship — and also her week among the world’s greatest teen science stars.

Knowledge@Wharton High School: What led you to Intel’s ISEF? Have you always been interested in science?

Catherine Wong: I have two parents in scientific fields, in medicine, and they introduced me to it early on. As a freshman, I was interested in engineering. I had a fantastic physics teacher and thought engineering was something I wanted to pursue. They always tell you that engineering is about impact and application. I thought the way I would be able to have the most impact was to work for residents of areas in developing countries where they have no technology. [I learned that] developing countries have extremely high rates of cell phone use. In India, there are more people with cell phones than toilets. I decided that creating technology that will work with this platform would be a very powerful tool to meet their needs locally.

KWHS: What is your cell phone project all about?

Wong: I develop medical diagnostic equipment that works with cell phones. This year, I’m building an electrocardiograph or EKG, an imaging technique that they use to diagnose heart disease. It works off the cell phone. It’s actually piggy backing off a project that I did last year to get stethoscopes to work with the cell phone. That was successful enough that I wanted to see if other diagnostic equipment could work off the same platform. The cell phone itself is displaying the EKG image. The [traditional] EKG is a fairly large standalone device that displays imaging of the heartbeat and cardiac problems. My [wireless electrocardiograph] turns the cell into an EKG. It’s a device that transmits signals from the heart to the cell phone so it will display the image and transmit it to physicians and doctors who are located remotely, not where the patient is.

KWHS: This can give people living in rural areas access to better health care?

Wong: Yes. The idea is to outsource the diagnosis so that wherever the patient is located, this cell phone infrastructure can help him or her get medical care of the same caliber and quality as if that physician were available locally.

KWHS: How well is your technology working?

Wong: The prototype I have right now is working really well. When you take an EKG, there are certain placements of electrodes across the heart. They have a gold standard of what a healthy EKG should look like. You look for certain signals in that ultimate transmission, especially what is called the PQRST wave, and if those things are visible in the signal, it means that it is accurate and a diagnosis can be made. All those are visible in the signals that I am outputting on the cell phone, which means that even though it costs $200 as opposed to $5,000 for a traditional EKG machine, it is still giving the same accuracy of the diagnosis.

KWHS: Where would you like to implement the technology?

Wong: Any developing countries where the cell phone infrastructure is available and where I can have the greatest possible impact.

KWHS: What has it been like to participate in Intel’s ISEF?

Wong: The week has been fantastic. This is the first time I’ve been at something of this scale. To be surrounded by so many people who share the same interests has been amazing. I have one more year that I can qualify for this, and I definitely hope to come again next year. In addition to the grand awards, which are really category rankings, there are special awards from different companies that are looking to foster specific interests. We’ve been able to speak with representatives from many companies and judges from a whole variety of different organizations.

One of the most memorable events of the Intel ISF was a panel of eight different Nobel laureates. The accessibility of these people was amazing. We asked questions during the open forum, and after the panel, we were able to speak one-on-one with them. I got to talk to Dr. Carl Wieman, who is a physics Nobel prize laureate. That was an incredible experience. They were so gracious, so nice and so human. I think that surprised us. It made us realize that these people who are seen as heroes in science are people, too. Dr. Wieman is working in the White House right now and heads a lot of the STEM [Science, Technology, Engineering & Mathematics] science educational directions for  the government and the president’s initiatives. He asked about physics simulations that we’re using in school — whether we are using them and we like them. It turns out that we do use them in school and we are always complaining that there isn’t a simulation for a particular scientific law known as Gauss’s Law [formulations of the relationship between electrically charged particles to create electrostatic force and electrostatic fields]. So I asked him about the Gauss’s Law simulation, and he told us, “Well, if you make one, why don’t you email us and we can put it up.” That’s a challenge we hope to accept

KWHS: What is the future of your project?

Wong: For my stethoscope project, I was awarded a provisional patent and I worked with a lawyer and filed for a non-provisional patent. I’m hoping to do that for this [EKG device] as well. I’m spending the summer at MIT’s Research Science Institute. They’re going to pair me up with different labs and different professors at MIT to work further on this project. I really want to expand the diagnostic devices that are available on that platform. If cell phones can be used as EKGs and stethoscopes, it’s conceivable that many other diagnostic devices like ultrasound can also work this way. I want to go further with the technology.

What is Intel’s ISEF?

How did Catherine Wong qualify to participate in the fair?

What are the potential benefits of her technology?