Detroit, Michigan, has had it rough in the past several years. High unemployment rates, people moving out, failing industry and endless economic hardships led the city to declare bankruptcy in 2013. In this article, KWHS explores how entrepreneurial thinking – even in those as young as middle school and high school – may be just what the city needs to begin rebuilding a new foundation for Detroit’s future. …Read More 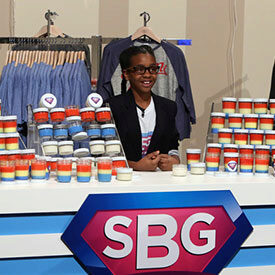 Her name is Asia Newson. Maybe you’ve heard of her? She is better known as Super Business Girl, which is also the name of her business. Building street cred in Michigan and beyond as “Detroit’s youngest entrepreneur,” Newson, 11, has been getting a lot of air play, featured on audio podcasts like This American Life, and showing up on The Ellen Degeneres Show and on ABC’s 20/20 news program. Newson, praised for her mad sales skills, wants you to buy her homemade “world’s best candle” in exchange for $20, so she can then buy food and clothes for needy children, as well as her own school and business supplies.

Possibly even more inspiring than Newson’s contagious smile and impressive business sense is her devotion to Detroit, which has been highlighted of late far more for its decay than for its promise. The city recently emerged from nearly a year and a half worth of financial restructuring after declaring bankruptcy in the summer of 2013. [tweetthis alt=”” hashtag=”” url=””]It was the largest municipal bankruptcy filing in U.S. history by debt – Detroit owed $18 million to $20 million[/tweetthis] – and, with the city’s population at around 700,000, the largest by size.

When a city like Detroit is having financial troubles and needs legal protection from the people and businesses to which it owes money — as well as time to reorganize its debts through an approved plan — the city can file for Chapter 9 of the United States Bankruptcy Code. Detroit sunk into financial distress over many years, due in part to its dwindling population and tax base, challenges with big players in its auto industry – like General Motors — and unpaid debts owed to municipal services like pensions and health care, water and sewer. In the past few years, Detroit’s deterioration has often been portrayed in the press with images of weed-choked lots and crumbling buildings. One telling statistic: Detroit has more than 100,000 vacant lots in its 139 square miles. A fourth of the housing units – 45,000 – are simply abandoned.

Few can argue that Detroit is in bad shape. But within that decline and inside those low real estate prices, entrepreneurs – people who are known to be outside-the-box thinkers and risk-takers – see opportunities. [tweetthis alt=”” hashtag=”” url=””]Many 20-somethings are starting up new businesses and paving the way for even younger entrepreneurs to help bring their city back from the brink through creativity, confidence and problem-solving.[/tweetthis]

Take Newson, for example, who, while still in middle school, teaches sales and business skills to high school students. She aspires to open Super Business Girl stores in downtown Detroit and to someday become the city’s “Youth Mayor.” As she told 20/20 in December, “Detroit is a wonderful place. [There has] been a lot, a lot of negative things on the news…. We even went through bankruptcy. But Detroit is still a great place to start a business. We have wonderful people. They’ll encourage you. I mean, I sell my candles here, like I make pretty good money.”

But even Super Business Girl can’t do it alone. Other [tweetthis alt=”” hashtag=”” url=””]young entrepreneurs say that they believe in the power of business to build the skills of tomorrow’s leaders and, in turn, to help fuel a renaissance in the city they love.[/tweetthis]

Raenell Williams and Demari Miller, both seniors at University Preparatory Academy high school in Detroit, are dedicated to strengthening Detroit from the inside out. Williams and Miller participated in a program hosted by Detroit Entrepreneurship Network, D[en], an organization run by college students that strives to improve the future of the community through entrepreneurship and business education for high school students.

Looking to expand their college résumés, Williams and Miller came up with the idea for Urban Communities Connect, a nonprofit organization aimed at giving high school students exposure to opportunities such as internships, summer programs and other ways of acquiring skills outside the classroom.

Through the D(en) program, Williams and Miller learned how to create and present slideshows, focus and deliver business pitches, and seek mentorship and funding for their ideas. “For me, it was more than the money aspect,” Williams says of starting the nonprofit. “It was about [helping] students by building connections, and creating a strong network for Detroit students and high school students across the state.”

Williams, a native of Detroit who has watched her city descend into financial chaos, says it isn’t easy when people have a negative impression of the place you call home. She adds that it gives Detroit citizens a sense of pride to take positive steps toward a better future. [tweetthis alt=”” hashtag=”” url=””]“I’m part of a generation that is dedicated to giving back to my city,”[/tweetthis] she says. “When I see my peers doing positive things in the community, we’re breaking stereotypes and defying what society has set out for us. It gives me a sense of motivation to do better in school. We know as citizens of Detroit [that] we have to take it upon ourselves to shed a positive light.”

Williams’ partner and fellow University Prep senior Miller agrees. He says young business people are key to the city’s future success. “They grew up in it, so they know many of the problems. The fact they’re young gives a sense of hope that change will come in their lifetime, making them more likely to act on it,” he says.

Miller also adds that Detroit is especially a good place for entrepreneurship because the city is now essentially working from a clean slate. “The majority of [Detroit’s] problems derive from the fact that many successful people leave, and the economy of the city depends on them,” Miller says. “However, if you [support their entrepreneurial ideas and keep them here], it will undo most of the problems Detroit faces.”

‘The Spirit that Kept Detroit Alive’

Evan Morton, a senior at Detroit Edison Public School Academy, says even though watching Detroit go through bankruptcy was hard, he is inspired by the many young entrepreneurs now giving back to the city, who also share their knowledge with future business people like himself.

Morton, who is interested in green business and technologies, leads his school’s team of young environmentalists, who promote environmentally friendly practices. Morton’s advice to other young entrepreneurs is to make the best of a bad situation. Taking baby steps toward attacking a problem, being persistent and asking for help are all key, he says.

The same holds true, he adds, for Detroit’s comeback.

[tweetthis alt=”” hashtag=”” url=””]“The fact that people didn’t give up on Detroit is what made us stand strong,” [/tweetthis]Morton says. “It might have been hard going through it, seeing stores close down, people moving, and hope dying. It was the spirit that kept Detroit alive. Now I can proudly say [that] in my eyes Detroit is coming back!”

Why is Detroit, Michigan, economically challenged? What are some of the things you have been hearing about this U.S. city and the course of action it has taken to survive?

What does high school entrepreneur Raenell Williams mean when she says, “When I see my peers doing positive things in the community, we’re breaking stereotypes and defying what society has set out for us. It gives me a sense of motivation to do better in school. We know as citizens of Detroit [that] we have to take it upon ourselves to shed a positive light.”

Do you think Detroit, despite all its troubles, has a bright future? Why or why not? Explore some of the “Related Links” below and expand your discussion of why entrepreneurship might be a powerful tool for economic development.