Working at a fast-food restaurant isn’t just about flipping burgers. High school students in particular can develop good skills that may help them to land a job later on. The only problem: entry-level jobs like these may soon be on the endangered species list.…Read More 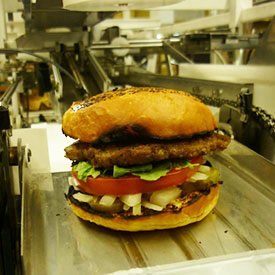 In the world of job experience, working at a fast-food restaurant isn’t just about flipping burgers. High school students in particular can develop good skills – from simply showing up on time to learning how to work in a team – that may help them to land a job later on. The only problem: entry-level jobs like these may soon be on the endangered species list. The threat to their existence? Robots.

Two years ago, Laura Thompson started working at the Forest City, N.C., Burger King hoping to earn some pocket money. The 18-year old — who recently graduated from Thomas Jefferson Classical Academy in Mooresboro and will start at Wingate University, a local private college, in the fall — runs the drive-through window and is an important part of the restaurant’s team. In May, the fast-food chain presented Thompson with a $5,000 scholarship from the Burger King Scholars program, which she says will pay for her first semester at college.

“Flipping burgers and other entry-level jobs can provide students with some great experience,” says Carol Christen, a Butte, Mont.-based career counselor and co-author of the job-path book, What Color Is Your Parachute? For Teens. “You learn how to deal with people, and you can begin to establish a track record of employment, which is important when you start looking for a full-time job.”

But teens may soon have to look elsewhere for entry-level job experience as some industries develop high-tech alternatives to human workers.

“The work ethic is important, but that’s lacking in many millennials,” Christen says, referring to people born from the late 1980s to around 2000. Generation Z follows. “Many of them don’t want to engage in repetitive work, and don’t feel they have to stick to a schedule. The fast-food industry doesn’t want to pay them to learn work ethic on the job, so it is increasingly adopting automation to cut costs.” The result? Robots are replacing humans for some of the most repetitive tasks.

We turned to high-tech Silicon Valley in California to learn more about this robot revolution. A San Francisco-based company, Momentum Machines, says it has already built a working hamburger-making robot that can do the job of up to three kitchen workers, grilling a beef patty, adding lettuce, tomatoes, pickles and onions and dropping it all on a bun. It can reportedly produce up to 400 hamburgers per hour. “Our device isn’t meant to make employees more efficient,” co-founder Alexandros Vardakostas has said. “It’s meant to completely obviate them.”

There’s a good chance that will happen, according to The Future of Employment, an Oxford University paper. “Commercial service robots are now able to perform more complex tasks in food preparation, health care, commercial cleaning and elderly care,” write co-authors Carl Benedikt Frey and Michael A. Osborne. “As robot costs decline and technological capabilities expand, robots can thus be expected to gradually substitute for labor in a wide range of low-wage service occupations, where most U.S. job growth has occurred over the past decades.” On a scale of “0” to “1,” where 0 indicates a low probability of humans being replaced by robots or other mechanization, and 1 indicates a high probability, the category of Combined Food Preparation and Serving Workers, including fast food, is rated at .92 — almost certain replacement.

Pressure to boost fast-food workers’ wages — up to $15 an hour in places like New York City, San Francisco, Seattle and Los Angeles — may accelerate the move to automate more jobs. A March report by Cornerstone Capital Group, The Economics of Automation: Quick Serve Restaurant Industry, says that, “automation is currently complementing labor, particularly in the ordering process. Should wage pressure intensify, however, the focus will likely shift and companies will seek to replace labor.”

It’s already happening in countries like Japan, where the Henn-na hotel, near Nagasaki, is using robots for check-in, luggage transport and other tasks. “The implication is that many jobs we once thought would never be mechanized will likely be done by robots,” says Christen.

Companies are doing their best to meet that market demand, with innovations like Baxter, a flexible robot made by Rethink Robotics in Boston. Designed to handle simple tasks like packaging and material handling, to more complex ones like machine tending — moving product from a supply position, transporting it to another machine, orienting it and then interacting with the other machine — Baxter is also relatively inexpensive as robot workers go, with a base price of $25,000.

A Silicon Valley innovator, Palo Alto, Calif.-based Industrial Perception (now a part of Google), reportedly is developing a robot that uses a kind of visual perception to move boxes, supposedly up to 60 per minute, compared to an average of 10 per minute for a human. Cool fact: Robots can now see in 3-D.

Martin Ford, author of Rise Of The Robots: Technology And The Threat Of A Jobless Future, says that new industries will “rarely, if ever, be highly labor-intensive.” Think of companies like YouTube and Instagram, which have a small workforce but rake in huge revenue. He also suggests that robots are poised to replace service jobs like teachers, journalists and lawyers. While these changes won’t happen overnight, they are already becoming a reality in certain industries. Consider adding the high school robotics team to your list of career-prep priorities.

Why is Alexandros Vardakostas’s comment “Our device isn’t meant to make employees more efficient, it’s meant to completely obviate them” so telling? What does it say about how the field of robotics is changing and evolving?

Do you or someone you know work in an entry-level job at a fast-food restaurant or someplace similar? How do you envision robotic technology transforming your workplace in the future? Imagine how it might change and what it might look like in 10-20 years.

5 comments on “Robots Advance: Automation in Burger Flipping and Beyond”