It has been an exciting few weeks for pop culture fans with the rise of international sensation “Gangnam Style,” a song and video from South Korean singer Psy that on September 21 broke the Guinness World Record for “Most Likes on YouTube” -- 2,141,758. Why is this Korean pop – aka K-pop – hit all the rage? KWHS explores the business and marketing implications of “Gangnam Style,” and the influx of K-pop in America.…Read More 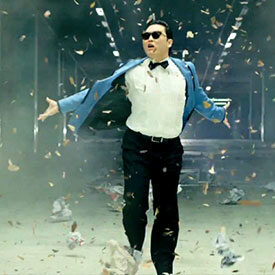 If you haven’t heard of “Gangnam Style,” the Korean pop (K-pop) sensation by South Korean singer Psy (Park Jae-sang), then you have probably been living under a rock for the past month. On September 21, the song broke the Guinness World Record for “Most Likes on YouTube” — 2,141,758 — a title previously held by LMFAO’s “Party Rock Anthem” and Justin Bieber’s “Baby.” “Gangnam Style” has earned a place on YouTube’s 30 most viewed videos ever. According to Mashable, an Internet news blog, on September 24, Psy bested Carly Rae Jepsen by surpassing “Call Me Maybe” with approximately 220 million views.

Simply put, “Gangnam style,” according to Psy, means to “dress classy, dance cheesy.” It draws on the brand-name, expensive, cutting-edge clothing favored by wealthy youth from the Gangnam neighborhood in Seoul, South Korea, where an edgy, young, urban aesthetic has sprung up from that area’s new money. The signature move of the video has been called the “invisible horse dance” because it mimics a bouncing/riding movement with hand gestures of alternating holding reigns and lassoing.

Despite the online hype over “Gangnam Style” in America, Psy claims that he did not have a Western audience in mind when he made the video. On top of that, the song isn’t even in English. Why, then, is it so popular, with everyone from Britney Spears to the Oregon Duck doing parodies of the invisible horse dance?

Wharton marketing professor David Bell, an expert in K-pop, attributes the universal appeal of “Gangnam Style” to its parallels with modern thinking. “Being stylish, having a good time, but also poking fun at yourself is emblematic of 2012,” he says. “People know what New York style is and other iconic places, but Gangnam has a novelty aspect as well. Gangnam could not only be a physical place, but a metaphor for a state of mind.”

This state of mind may be more controversial than trendy clothes and silly dancing. Some experts have read “Gangnam Style” as a social commentary on the lifestyle of people living in Gangnam. According to Businessweek, “About 1% of Seoul’s population lives [in Gangnam], but many of its residents are very rich. The average Gangnam apartment costs about $716,000, a sum that would take an average South Korean household 18 years to earn.” Such a wealth divide means that the privileged neighborhood houses “the country’s best education opportunities, the best cultural offerings and the best infrastructure, while spending big on foreign luxury goods to highlight their wealth.” With his expensive clothes and an indifferent attitude — in the opening scene of “Gangnam Style,” a woman fans Psy as he lounges in a chair — Psy becomes a parody of this materialism.

Bell argues that Psy’s accessible image, not his message, has made the song so popular, adding that “Gangnam Style” is “almost like a classic rap video from a few years ago with girls and cars — not as offensive and in your face, but with a humorous edge … Psy is not some buffed-out guy, but [more] like a Korean business man.” “Gangnam Style” plays on materialistic themes in rap videos, but without an aggressive attitude that many find offensive in the rap genre, Bell suggests.

Selena Donayre, a sophomore at Alexander Hamilton High School Academy in Los Angeles, says that all her friends are familiar with the “Gangnam Style” video. When she first saw it, “I thought it was kind of weird and making fun of normal pop videos,” says Donayre.  “That makes it really funny because I think typical rap videos are usually stupid.”

“Gangnam Style” has created such a global stir that it is becoming a merchandising sensation, sparking the creation of clothing lines, Halloween costumes and even a blog post from the Harvard Business Review addressing “takeaways that companies can apply to their brands and products.” Bell sees the possibility of such videos using digital marketing for “energizing fashion brands” that need to be updated “for a young, edgy audience.” He suggests that the Mercedes 350 featured in “Gangnam Style” is a deliberate product placement.

The Globalization of K-pop

The Harvard Business Review notes how “Gangnam Style” strays away from the traditional manufacturer-to-consumer marketing strategy in favor of a “social network-oriented playbook in its media use, content development and message…. To start, the song intentionally lacked a copyright so that people would be encouraged to create their own online parodies, in essence their own ‘XYZ Style.’” Such an idea could be revolutionary for marketing, especially when companies like Apple are fighting tooth and nail to protect the patents on their products.

Even though most of the song is Korean, according to Bell, the influx of K-pop in America is not so random. In Asia, Korea is looked to as the authority on pop culture. When asked if he thought Psy’s video was a unique hit or part of a growing trend in the globalization of K-pop, Bell says, “It really could be a trend. A lot of the Korean pop stars are really big in Asia, but it is not a huge jump to cross over to Western cultures.” More and more, people see Korean brands as evidence of cutting-edge trends for everything from electronics to plastic surgery, he adds.

As for Psy, he has signed with Schoolboy Records, a division of Universal Republic Records, headed by Justin Bieber’s manager Scooter Braun. Expect to see and hear more “Gangnam Style” in the weeks and months ahead.

Where is Gangnam located and what is it like?

Why do you think “Gangnam Style” has such universal appeal? Do you agree with Prof. Bell’s reasoning?

What are some details of the video’s marketing approach and why might it be considered revolutionary?

Is “Gangnam Style” a one-hit-wonder or possibly the start of a growing trend that includes the broader K-pop influence?