Are you an “aggie?” Careers in agriculture are not all cows and plows these days. In fact, the ag business, a hot spot for employment in an otherwise challenging economy, involves everything from entrepreneurship, marketing and merchandising to animal science, software development and genomics. What’s your ag career choice?…Read More 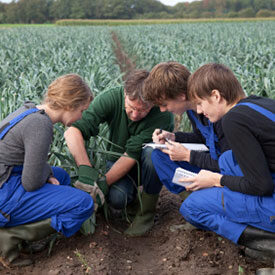 Hugh McPherson of New Park, Pa., lives and works on a farm, and  he even enjoys driving a tractor from time to time — but he doesn’t consider himself to be a farmer. “I call myself the ‘Maze Master,’” says McPherson, who, after returning home from college 16 years ago, founded Maize Quest Fun Park on his family’s fifth-generation-owned produce farm. “I always knew I’d have a career in agriculture, but I felt the need to come up with something I could call my own.”

Armed with a degree in agriculture business management from Penn State University, a big loan and a vision to make corn mazes more fun, McPherson grew the company into a 20-attraction fun park that draws 30,000 visitors a year. He is a good example of the new-generation farmer. “When most people think of careers in agriculture, they see a farmer plowing a field, milking a cow or mucking out a horse stable,” says Greg Pile, an agriculture teacher and FFA coach at Sumner High School in Sumner, Wash. “They don’t always see agriculture for all its career possibilities.” FFA, formerly called the Future Farmers of America, exposes high school students to agriculture education.

According to the Bureau of Labor Statistics, there are some 200 careers in agriculture. And of the 22 million people who directly work within those careers, only 10% are actively involved in farming on a daily basis.

As the founder of Sumner’s 36-year-old FFA program, Pile’s goal is to make sure students gain the skills they need to be successful, well-rounded citizens. “I hope they take with them a real respect for education and agriculture,” Pile says.

Over the years, the number of students getting involved in the program has increased. “In the beginning, about 50% of my students were coming in off the farm; now that number is down to less than 4%,” notes Pile, who has nearly 300 students taking ag-focused classes ranging from horticulture and animal science to agriculture science research and biotechnology.

Alyssa McGee, a freshman at Sumner, strongly encourages students who are interested in agriculture to give their school’s FFA program a chance. In fact, she says that the different projects she has been a part of have helped give her a better sense of direction when it comes to her career goals. “I’ve always wanted to be a veterinarian,” says the 14-year-old, who enjoys raising sheep. “Thanks to FFA, now I can see myself taking that a step further and working as a livestock geneticist or researching the reproductive physiology of animals.”

McPherson also suggests that high school students find someone who is doing what they think they might like to do, and ask if they can  tag along. “A lot of kids fall in love with idealized jobs,” McPherson notes. “Go and see what the real job is like. That’s the best way to find out if you’ll like it.”

As the landscape of the agriculture industry changes with the introduction of new technologies and sciences, colleges are beefing up their course selections. As a result, enrollment in agriculture-focused degree programs is booming. According to an article published in USA Today in August, Penn State University, an agriculture powerhouse and McPherson’s alma mater, has seen enrollment increase by 40% since 2004. Its agriculture degrees now include cutting-edge research in areas such as plant breeding and genomics, which is the study of DNA in cells.

Also seeing a steady increase in enrollment is Texas A&M University’s College of Agriculture and Life Sciences, which McGee hopes to attend in a few years. “Students are attracted to degrees in agriculture because so many of the skills they learn are transferable,” says Jennifer Ann Smith, a career coordinator with the University’s College of Agriculture and Life Sciences. “Many of our graduates end up working in agriculture business-related careers, such as marketing and merchandising, with sales being the top positions that are being filled.”

Alyssa Spruill, a junior “aggie” at Texas A&M, recently accepted a summer sales internship with Monsanto, a St. Louis-based agribusiness giant that makes seeds, pesticides and an array of other farm products. As a result, she is now adding sales to her top list of career choices, along with law and politics. “I chose to major in agriculture leadership and development and minor in agriculture economics because it’s a degree that covers such a broad range of skills,” Spruill says. “I know that there will always be a career in the ag industry for me.”

A ‘Bright Spot in the Economy’

According to David Buchanan, associate dean for academic programs at North Dakota’s College of Agriculture, Food Systems and Natural Resources, “Career opportunities in agriculture are excellent.” In his welcome letter featured on the college’s website, Buchanan writes: “Students from both urban and rural backgrounds are finding satisfying and rewarding careers in private companies, government agencies, educational institutions and … in non-traditional areas such as medicine, law, space, banking and military careers.”

Agriculture is a bright spot in the economy, confirms Smith. With a continually growing population, there will always be a demand for jobs in agriculture because we need it to exist. The three top employers that Texas A&M ag students are landing jobs with, she adds, are DuPont Pioneer, Monsanto and John Deere. “John Deere has a need for a wide range of skills and experience,” notes company spokesman Ken Golden. “These include many different disciplines in engineering, information technology, software and technology development, accounting and finance, global positioning and telematics technology, sales and marketing, advanced manufacturing and business operations and leadership.”

John Deere added 5,000 jobs in the U.S. in the past two years with aspirations of doubling the sales of the company by the end of 2018. “This goal requires us to recruit, hire and retain the best and brightest students in a variety of fields and to provide them with opportunities to contribute immediately to the success of the company,” Golden says.

With the success of his corn maze, McPherson decided to take things a step further and franchise his business model. “People were calling me up asking for advice on their mazes,” McPherson says. “I spent a lot of time and money making it work, so I figured why not create a package so others didn’t have to fumble through it like I did.”

McPherson and his staff serve as ongoing support for franchise owners by designing their maze each year, going to farms to cut the maze and even holding workshops and online classes. Some 65 Maize Quest parks are located everywhere from Florida to Minnesota to Canada and the UK. “What I enjoy most about a career in agriculture is making a connection with other people, putting them into an agricultural-rich environment and then seeing the excitement on their faces from the experience,” McPherson says. “That’s what makes it all worth it.”

What is the FFA and how has it helped high school student Alyssa McGee?

What are some colleges that specialize in ag business? What careers are grads exploring, and what companies are hiring their grads?

How did Hugh McPherson innovate his fifth-generation family farm into the next generation?

One comment on “Mazes and Monsanto: Growing Prospects in the Ag Business”