Autumn Bayles didn’t make it to the executive offices of Tasty Baking Company in Philadelphia without letting her voice be heard. Her advice: “Raise your hand, ladies and gentlemen, because that’s the way you’re going to get the opportunities you want. It’s not always going to be handed to you.” Bayles talks about passion, problem solving, and why everyone no matter what the job, has to be a salesperson.…Read More 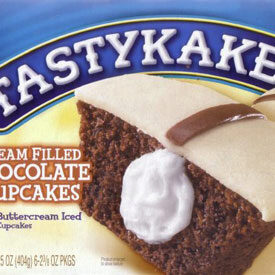 “As a part of my technology work, I was very involved with that side of the operation,” said Bayles, who was hired to be part of president and CEO Charles Pizzi’s turnaround team. “I raised my hand and said, ‘Why don’t you let me do this?’” After some deliberation, Tasty Baking executives divided up the former executive’s responsibilities, giving Bayles a share. “I was grateful for what I got,” explained Bayles during a past Wharton leadership lecture. “I dug in and did it to the best of my ability. Then they gave me another piece, and finally they gave me the whole thing. So raise your hand, ladies and gentlemen, because that’s the way you’re going to get the opportunities you want,” said Bayles, who is now Tasty Baking’s senior vice president, strategic operations.

In reality, coming to Philadelphia, Pa.-based Tasty Baking Company was “certainly not what I had in mind when I graduated from Wharton,” said Bayles, who earned an undergraduate degree from Lehigh University and an MBA from Wharton. Prior to joining Tasty Baking Company, she was managing principal consultant for IBM Business Consulting Services.

She took the Tasty Baking CIO job because of her fondness for the city of Philadelphia — and for Tastykakes. “They are an icon in Philadelphia. I love to eat, and I love Tastykakes.” It was also about making my mark.” In 2003, despite a loyal brand following, Tasty Baking Company was in trouble, “almost bankrupt,” said Bayles. Resuscitation was definitely needed. The company — a leading baker of snack cakes, pies, cookies, and donuts with close to 900 employees and sales of approximately $170 million — had seen its operating margin drop to -4.9% in 2002, down from 7.9% in 2000. CEO Pizzi was quoted as saying that “Tasty Baking’s system and processes resembled that of a 1975-ish company.”

Bayles came in and helped update those systems and processes. “It was a month of rough times,” Bayles said, recalling the early reports coming in about things not working, employees not understanding what they were supposed to do with a new computerized system for the company’s core processes and Tastykakes not getting out to the field. “I tried to maintain my calm” she said. “These people were in a panic, too. If I’m flipping out, all hell was going to break loose.”

The IT transition re-affirmed Bayles’ belief in the value of being “honest and upfront” in business. When faced with problems, you “figure out what they are, fix them and fix them fast,” she said. In addition:

• Follow Your Passion: “If you follow your passion, do what you love, the money always, always follows. Passion helps buoy a person through difficult or mundane times, she said, “because you believe in the long-term goal at the end of the road.”

• Always Be the Best: “No matter what you’re doing — whether it’s making copies or checking page numbers — always do your best work. Always exceed expectations…. If you’re fantastic, it’s hard for people to not notice you. It also minimizes obstacles.”

• Always Be Nice: One should treat people how they want to be treated, Bayles said. “For you to understand that, you have to understand the person’s motivation [and] agenda…. Be appreciative,” she added. “I always make sure I thank everybody for what they do, because without those people, I could be a failure.”

• Seek Help: “Seek help from mentors, help from networking organizations, peers, colleagues,” said Bayles. “A lot of great men and a lot of great women helped me achieve what I have achieved. I don’t forget that….Seek help, and when you get to the point [that you can] give it back,” do so.

• Continuously Learn, Improve and Grow: “It’s easy to fall into your niche, find something you’re really good at and keep doing it over and over and over,” Bayles said. “If you ever want to move beyond that point, you have to stretch yourself. Do something that’s a little bit scary, and after a year it won’t be scary any more.”

• Be a Salesperson: “No matter what job you are doing, everybody is in sales and marketing. I sell my ideas. I sell things that may not be popular in the company. I sell insight. I sell strategies. I’m selling me: ‘I’m credible. You can trust me. I know what I’m doing.’” Being right isn’t enough, she added. “If you have the best solution, the best idea, it does not matter if people do not buy into your idea.”