Considered the leader of customer satisfaction in the auto industry, James David Power III is better known to most by the company that bears his name, J.D. Power and Associates. In this KWHS video interview, car enthusiast Evan Acuna talks with J.D. Power about his career, his guiding business principles and, yes, his latest ride. …Read More 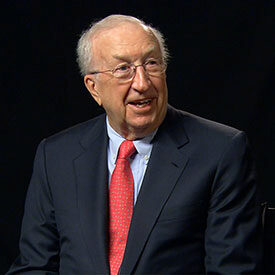 James David Power III, 82, founded J.D. Power and Associates, a marketing information company that conducts surveys of customer satisfaction, product quality and buyer behavior, largely for the automotive industry. It is best known for its customer satisfaction research on new-car quality and dependability. Power, who sold his business in 2005, built a career that positioned him as an influential figure behind some of the most exciting changes in car design, manufacturing and marketing to occur throughout the history of the automobile.

After completing his undergraduate education and serving four years aboard a Coast Guard icebreaker, Power earned his MBA from Wharton and started on a career with the Ford Motor Company. He supplemented his auto industry experience with marketing research and corporate planning work for J.I. Case and McCulloch before founding J.D. Power and Associates in his kitchen in 1968.

Power grew his firm into a household name through hard work, a savvy business sense and strong ethics. This latter trait — so sorely lacking in an industry built on planned obsolescence and sex appeal — earned him the respect of conscientious car manufacturers and consumers alike. But the car companies didn’t just admire Power for his ethical business model. They appreciated him for the profits his firm could help them generate. A good rating from J.D. Power and Associates became an automotive gold mine as Power built up his firm’s reputation. Buyers knew what they were getting when they purchased a vehicle ranked highly by J.D. Power. Just as importantly, manufacturers understood that hiring J.D. Power for consultancy work would lead to more carefully designed products with greater appeal in an increasingly consumer-driven marketplace. Part consumer advocate and part marketer, Power united the goals of buyers and sellers. His company’s work encouraged the production of responsible cars and satisfied drivers and, in doing so, helped to revolutionize the automotive industry.

KWHS interviewer Evan Acuna sat down with J.D. Power during his visit to Wharton in November. Acuna, a recent University of Delaware graduate, grew up loving cars and began writing for grassroots auto publications even before getting his driver’s license.

Knowledge@Wharton High School: Today we are talking with James David Power III, founder of J.D. Power and Associates, which is a marketing research firm most famous for its surveys of customer satisfaction, product quality and buyer behavior for the automotive industry. Mr. Power, thank you for joining us.

Dave Power: Thank you for having me.

KWHS: As a car enthusiastic, I have been familiar with your work for a long time.  But for some of our viewers who are a little bit less familiar with the auto industry, could you give a brief explanation of what sort of work your business does?

Power: We started in 1968 doing our own survey work in southern California. My wife did the tabulations on the kitchen table, and the children did the mailings for us, folding up the questionnaires, putting a [stamp] on them and so forth. That’s how we got started. We went as far as becoming worldwide, and when I sold the company in 2005, I had about 850 employees.

KWHS: With all the notoriety of your company, it seems like the marketing departments of a lot of different car companies ended up wanting to misuse or misinterpret some of your information. So how did you maintain your independence and keep your work unbiased amid pressure to sell out to the auto industry?

Power: Well, contrary to the way they conducted the market research, we owned the data so we could publish it if we wanted to. And we kept it quiet at first, but then there were leaks getting out. So we had to formalize it and reel it in to be realistic. Some manufacturers might have the best door handles, and it turned out to be the best car by the time they advertised it. So we had to put in controls.

KWHS: When we look back at the auto industry, we see a select few individuals who contributed greatly to the founding of the industry – people like Henry Ford, Karl Benz, Ferdinand Porsche. Do you think there is room in the industry today for such visionaries?

Power: I think there are. Elon Musk [CEO of Tesla Motors] will go down [as a visionary]. There are going to be more coming along. But it is a changed world from 1968.

KWHS: Could startups find opportunity in the need to reevaluate automotive powertrains,or will the existing forces in the car world remain at the forefront of new energy technology?

Power: [tweetthis alt=”” hashtag=”” url=””]I think that the customer today is in charge. It was never like that when we started out. When they have better information, they make better decisions[/tweetthis], and that’s what really has changed it. Information getting to the consumer allows them to make better decisions.

KWHS: You managed to create a successful business that was founded not only on good ideas, but on good ethics as well. What advice can you offer entrepreneurs about how to maintain a clear focus and a clear conscience in their work?

Power: We had what I call the three I’s: independence, where we owned the data;  integrity was very important also — to say it like it was and not change it for a particular car manufacturer; and then impact. We had to have impact otherwise nothing would be done. Those were our three guiding values.

KWHS: Based on your predictions for upcoming changes in the car market and in car retail, what sort of jobs do you think will be available to younger people trying to get into the auto industry?

Power: [tweetthis alt=”” hashtag=”” url=””]If I were to advise one [who is] thinking about getting into [the auto industry], I would say come in through the digital electronics area. That’s where the future is.[/tweetthis]

KWHS: Do you think electric cars are going to gain more traction than technologies like clean diesel or even hybrid electrics?

Power: I think electrics – full electrics – will win out once battery technology continues to improve. But it is not only electrics. I would say compressed natural gas is going to have an impact on the industry as well and free us up from our dependence on oil. That will change the way everyone operates.

KWHS: That is good to hear. As a car enthusiast, I wanted to ask you one last question. What are you driving now? What is a favorite car or two of all time?

Power: You wouldn’t believe it, but I am driving a Mercury Marauder.

Power: I love it because I can get in, turn the key and take off. I can’t keep up with all these new gadgets in the car. I have had it 11 years, and [it just turned] 50,000 miles. A lot of young people come up and ask me about it. I also have gotten stopped by the police a couple of times. They wanted to see the car. My wife thought I should get a ticket. She was giving me a bad time after that. [The police officer] walked away and said, “That’s a great car.”

KWHS: Thank you for joining us, Mr. Power.

Power: Thank you for having me.

What is J.D. Power and Associates? Have you heard this company name before? What did you learn about the company that you didn’t know before?

What are J.D. Power’s three I’s for guiding his business? Why do you think he chose these three principles?

One comment on “Did You Know that J.D. Power Drives a Mercury Marauder?”

Tackling the Problem of Hunger in America