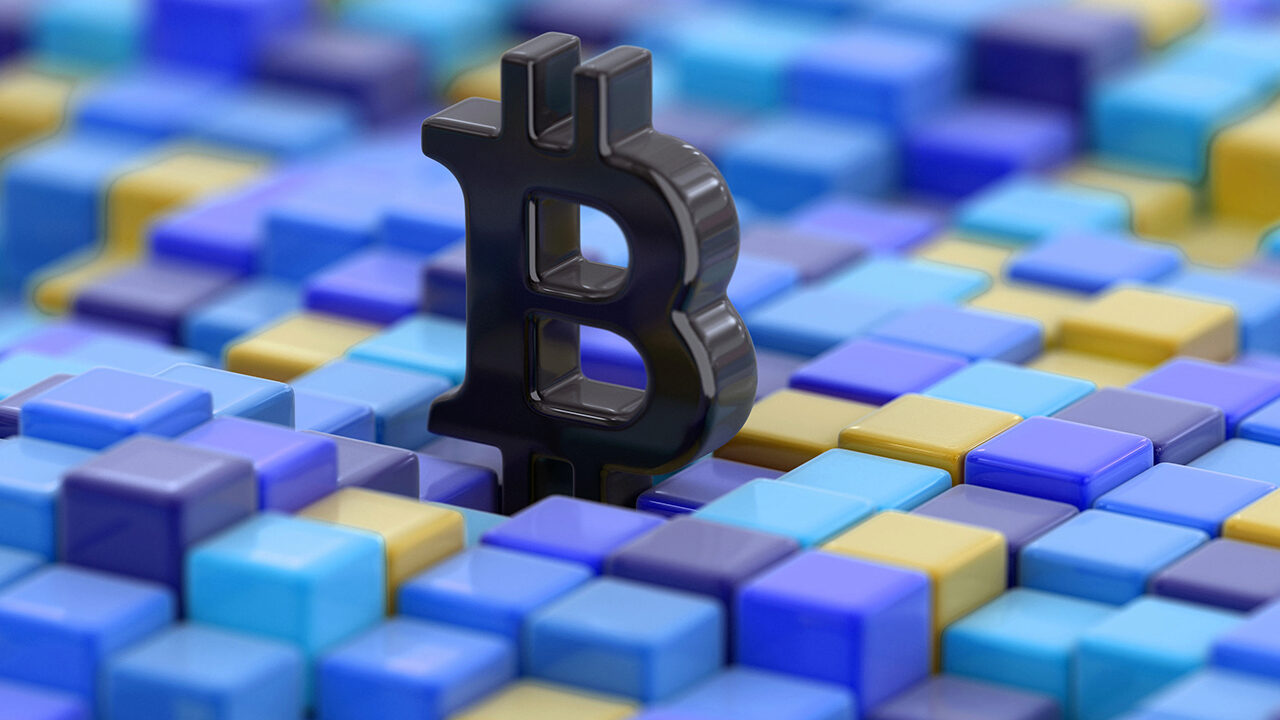 Knowledge@Wharton High School has been hearing from a lot of teens lately who are really into cryptocurrency, which is digital currency that holds a store of value similar to more traditional currencies, like the U.S. dollar or the euro. Bitcoin is the best-known cryptocurrency. It is completely digital and is stored on your computer. It’s also decentralized and runs on a peer-to-peer network, which means that not one person or institution can regulate or control bitcoin. And it uses cryptology as a security measure to make sure that only you can use your bitcoins.

It’s no wonder that today’s tech-savvy generation of digital natives is intrigued. In the exploding world of fintech, cryptocurrency has captured your fascination.

Technology lover Vicky Flores, a California college student who was hanging out on the Wharton campus in Philadelphia this July as a member of the Girls Who Invest class, told us that she read The Bitcoin Whitepaper in high school and was immediately hooked. This paper, published in 2008 by Satoshi Nakamoto, the founder of bitcoin, explains what bitcoin is, how it’s used and the problems that it supposedly solves. “People thought I was crazy buying bitcoin, but it ended up being a great investment because last December it jumped up to $20,000 and I had bought it around $1,000,” said Flores. “I sold my bitcoin then and made $7,000.” The price of bitcoin did surge by nearly 1,900% in 2017, to an average high of $19,499 on December 15 across major bitcoin exchanges, before plunging down to just under $14,000 by year’s end.

Today, one bitcoin equals less than $7,000. It has proven to be an unpredictable investment. And for many, the mysterious world to which it belongs – with tales of cryptocurrencies, coin offerings, blockchain and mining – leaves them cautious, yet curious. We tried to demystify some of the hype in this recent cryptocurrency starter-kit story.

A key part of cryptocurrency is blockchain technology, a digital ledger of economic transactions that can be programmed to record financial transactions and other transactions of value. Flores described blockchain this way: “Blockchain is decentralized. Banks are a centralized entity, in which there is an intermediary between where you put your money and then you take it out. What’s interesting about blockchain and bitcoin as the payment system, is that they use a peer-to-peer network that’s decentralized. That means that hundreds of thousands of users can edit a block in the blockchain and actually be able to accept a transaction or not accept it.”

Not long ago, Aakash Sivasankar became enchanted by blockchain. A senior at Neuqua Valley High School in Naperville, Illinois, U.S., Sivasankar provides our latest perspective on cryptocurrency. He sent us a pitch this summer in hopes of participating in our KWHS Summer Essay Series. He wrote: “Over the course of two years, I have managed a personal crypto portfolio amassing more than 11,000% in total gains. It has been an interesting and very informative experience that shed light on another side of the investment world that many are either unaware of or have never been exposed to.”

In this first-person essay, Sivasankar, 17, recounts his journey into cryptoinvesting.

While the cryptocurrency market today is muddled with debates about bubble and revolution, the origins of the first digital tokens were a bit less dramatic. The idea behind Bitcoin was to create a universal monetary system replacing physical currency. With this came the development of blockchain that is being developed in ways never imagined before. The earliest backers didn’t invest because of value from a financial standpoint, but as a way of supporting a totally new technology.

As a middle schooler, my initial attraction to cryptocurrencies came from an article that was trying to guess the true identity of Satoshi Nakamoto, an alias of the alleged founder of Bitcoin. While the conspiracy talk brought me in, blockchain got me hooked. The idea that you could use a system of millions of computers and revolutionize currency was absolutely insane! Beyond just this basic concept, I didn’t know anything from the financial or technological side. All I knew was that I wanted to be a part of it.

I ended up spending a year tracking the ebb and flow of the sparse number of tokens on the market, while also trying to learn more about blockchain. I delved deeper into the mechanics of the system, the feasibility of blockchain, and the financial standing of any crypto-based security. By the summer of my freshman year in high school, I understood the basics of the market and the technology behind blockchain. Yet I still wasn’t ready to make my first investment. 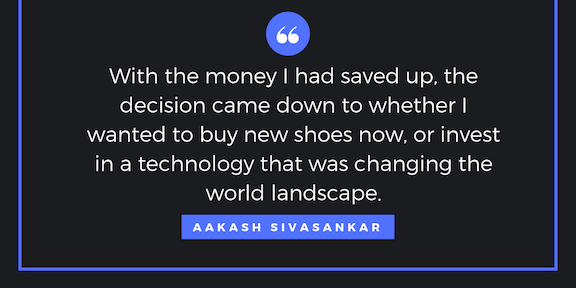 In the one year I watched the market, I was more skeptical, if anything, of making a blockchain investment. The best advice I got was this: a loss will only help shape your investment philosophy more. I took this to heart and went through my own analysis. I was unsure of crypto as a store of value, but I believed in blockchain and the peer-to-peer technology. My risk tolerance was very low and I could afford to be aggressive. My capital was limited and therefore my losses were also capped. With the money I had saved up, the decision came down to whether I wanted to buy new shoes now, or invest in a technology changing the world landscape. I chose the latter. I made my first investment in Ethereum [a type of digital currency like Bitcoin] with the couple hundred bucks I had saved up.

While everything leading up to the investment was nerve-wracking, everything after was uneventful. I continued watching the market everyday, noting that the swings of 5% to 10% in price would be incremental on Wall Street, but minor in terms of the crypto market and my portfolio. However, a couple months later, Ethereum hit a new low. Yet, in this moment I didn’t panic. Rather, I ended up buying more. I kept with my rational stance and thought about the transaction before going through. I still believed in blockchain, losses would still be capped, and the only opportunity cost would be food and entertainment. I poured in the rest of the money I had and settled down for the ride.

Three months later, the bull market (the start of a rise) began in Ethereum and all cryptocurrencies. Over the course of just three weeks, I had earned a multiple of four on my initial investment. Nothing was more exciting, and the temptation to sell gnawed at me everyday. However, I still kept on my disciplined path. These short-term gains based on market speculation would be miniscule compared to the long-term benefit of this universal smart contract system. By the time it was summer again, I had a Return on Investment (ROI) of more than 4,000%. Yet, I still understood that this was the beginning.

Fast forward several months to early 2018, and I finally made the decision to sell my Ethereum. But, this wasn’t an end to my portfolio or my blockchain investments. Instead, I was actually disciplined enough to realize that these highs would not be sustained much longer. I knew that the prices would drop sometime soon and knowing the volatility of crypto, it would be bad. I clicked sell and came out with an ROI topping out at 11,000% over the course of a year and a half.

Now I had the capital to build a true portfolio and really diversify. I segmented my newfound funds, leaving 60% to reinvest in crypto after a price drop. I used the other 20% to buy into a great company (NVIDIA). And finally, the other 20% went into day trading during the coming earnings season.

When the market finally calmed, I reinvested my money intro crypto, buying back Ethereum, but also diversifying into other blockchain securities like Stellar Lumens and a crypto index fund called Iconomi. The market has been stagnant though, and I’ve been carefully investing that 20% every earnings report season. I’ve also been working out how to make my crypto investments less risky. Using TensorFlow [an open source software library for numerical computation], I’ve started working on an analysis platform to try and predict prices of certain cryptocurrencies.

Building out my portfolio was a rigorous challenge, but one that I have thoroughly enjoyed. Over the course of three years, I made sure to take the time to learn and understand what I was investing in. While lots of people still don’t understand the world of cryptocurrencies, I encourage them to learn. Not so long ago, I was in the same place.

Are you interested in cryptocurrency? Please share your story with us in the commenting section of this article.

Why do you think so many high school students are curious about cryptoinvesting?

Debate the pros and cons of bitcoin, blockchain and cryptocurrency. Visit the Related Links section for more resources to fuel your discussion. Is this financial technology here to stay? Is it truly safe? Why or why not?

4 comments on “That Crazy Cryptocurrency”