Need a little excitement? Mixed Martial Arts, or Ultimate Fighting, has become one of the hottest spectator sports among teens. MMA matches, which combine boxing, wrestling, karate and judo, top the weekly TV ratings. Even Donald Trump has his eye on the black belt, taking an equity stake in one of the sport’s biggest events. The question is, can you handle the combat? …Read More 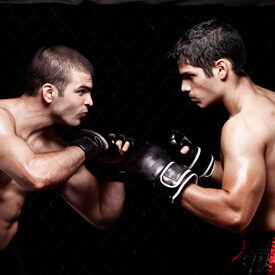 We’ve all been on the edge of our seats during the last few seconds of a varsity game, but at Winchester High School outside of Boston, students have taken the art of competition to a whole other level. In the past few years, the school introduced a new Mixed Martial Arts (MMA) program, a sport once considered so violent it was illegal in all 50 states. But in less than two decades, MMA — also known as Ultimate Fighting — has gained momentum in professional and amateur sports worlds.

“Initially, it began as a selfish desire to carve a niche for myself,” admits In-Goo Kwak, a Winchester High graduate who started the ultimate fighting team at his school before moving on in 2009 to Tufts University in Medford, Massachusetts. The then 18 year old, who’s been practicing martial arts for more than 10 years, was among the first in the nation to introduce the full-contact sport on a high school level. But ever since MMA gained popularity in the 1990s, thanks to regularly televised Ultimate Fighting Championships (UFC), the sport has gone mainstream, especially among teens and young adults. By combining boxing, wrestling, karate and judo, MMA’s popularity has actually surpassed that of professional football on pay-per-view (PPV), according to an article in The New York Times.

Youngest Fan Base of All Major Sports

“The sport’s popularity has been aided greatly by getting it on cable and network TV,” says Ben Fowlkes, an online columnist for Sports Illustrated. “Six or seven years ago, an MMA fan either had to buy the pay-per-views, wait for it to come out on video, or try and find fights on the Internet.” Now, the UFC regularly broadcasts highly touted fights on Spike TV. And Elite XC has promoted several history-making match-ups on CBS.

“MMA has the youngest fan base of all major sports,” says Fowlkes. “For teenagers, obviously the violence and excitement are a draw.” The fast and furious fighting is considered among teens to be as legitimate as any NFL or NBA game. MMA fans also have their favorite fighters. And like Kwak, they’ve grown up practicing martial arts, like jiu-jitsu, kickboxing and wrestling.

But unlike the knock-down-drag-out televised tournaments, like the famous fight between Chuck Liddell and Tito Ortiz (which ranked as the highest PPV of all time), Winchester High’s program is anything but a fight club. “All practices are overseen by a faculty advisor,” says Kwak. Fifteen full-time team members and a dozen more students regularly take part in MMA practice after school, which is devoted to warming up, stretching and drills. Team members, ranging in age from 14 to 18, only ever get to throw punches at mats, not each other.

During Kwak’s tenure, the Winchester team was composed exclusively of boys, but he was beginning to attract girls to the sport. There are many well-known female fighters, like Cat Albert, Tonya Evinger and Judy Neff, whose famous fights get plenty of clicks on You Tube.

In Philadelphia and New Jersey, martial arts expert Brad Daddis operates his own MMA Training Centers, where his students range from teens to adults, ages 16 to 35. “We have about 80 percent male and 20 percent female students,” says Daddis, who says 10 percent of them actually plan to compete in full-on fighting. Most students are attracted to the intense workout regime and self-defense tactics, particularly the women. “Nothing is a better workout,” he says. “You train like a boxer.”

Despite the sport’s dedicated followers, controversy has plagued MMA since the beginning (drawing blood is as much a prerequisite as throwing off the gloves in hockey). Fowlkes says even though the extreme one-on-one competition is now regulated, it’s still considered a combat sport. The U.S. Army even uses it for its Army Combative Championships.

It’s sometimes controversial success, however, is one of the reasons Wharton alum and reality TV’s Donald Trump signed on with ultimate fighting’s Affliction to produce “Affliction Banned” in Anaheim, Calif. in 2008. The event, which was broadcast on Fox Sports Network, the Fight Network and PPV in July, paired superstar heavyweights Fedor “The Last Emperor” Emelianenko against Tim “The Maine-iac” Sylvia, with tickets costing as much as $1,000 a seat. Fighters can earn from $500 to $500,000 per match, depending on base pay, bonuses and deals with event sponsors.

Big ticket prices and even bigger crowds aren’t unusual. “MMA isn’t just popular in the U.S.,” says Fowlkes. “It’s incredibly popular in Canada and the U.K., maybe more so than in the U.S. And it’s also popular in places like Japan, the Philippines and Brazil.” To reach even more fans, the UFC licensed a video game, UFC 2009 Undisputed, published by THQ and developed by Yuke’s Media Creations, for PlayStation 3 and Xbox 360.

Kwak, a sophomore studying international relations, says, “I intend to keep training recreationally.” He admits he’d like to work behind the scenes of the UFC when he graduates. “I’ve always looked up to Russian Fedor Emelianenko,” he says. “I admire his work ethic.”

@Business: Do You Have a Smart Social Media Strategy?