While President Barack Obama is talking about the salvation of the auto industry this week, other car enthusiasts have their eyes on innovators like Elon Musk, CEO and founder of Tesla Motors. This summer, Alexander Mason, 17, visited the electric car company’s headquarters in Palo Alto, Calif., and came away with key insights about entrepreneurial spirit and leadership. …Read More 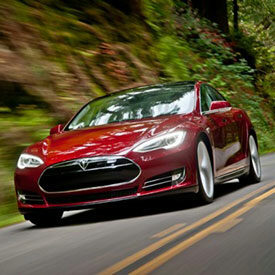 The U.S. automotive industry has been much in the news this week. After the U.S. Treasury department sold the last of its shares in General Motors on Monday – money it had invested in the company in 2008 to help it avoid bankruptcy — President Barack Obama said, “Thanks to the workers on our assembly lines, some of the most high-tech, fuel-efficient cars in the world are once again designed, engineered, and built right here in America – and the rest of the world is buying more of them than ever before.”

Auto enthusiasts likely caught another headline, this one about Tesla Motors, a Silicon Valley maker of luxury electric cars. Tesla opened its first Michigan charging station this week — not far from Detroit, the automaker capital of America – where owners of the Tesla S can charge their cars and travel between Detroit and Chicago without worrying about running out of power.

Alexander Mason took note of Tesla’s news. Mason, 17, is a senior at the French-American School of New York in Mamaroneck, N.Y. This summer, he participated in Wharton’s Leadership in the Business World program in San Francisco and Philadelphia. In this essay for KWHS, Mason writes about his visit to Tesla Motors in Palo Alto, Calif., where he was able to experience true innovation, a serious work ethic and some pretty cool electric cars.

[tweetthis alt=”” hashtag=”” url=””]Imagine a car that moves stealthily like a cat in the night, that can go from 0 to 60 miles per hour in under four seconds, and that has no buttons, just a simple 17” touch screen to monitor everything.[/tweetthis] Now imagine a car that has all of these attributes while also being solely powered by electricity with up to a 300-mile range between charges. That is a brief description of Tesla’s Model S electric car, part of CEO Elon Musk’s grand vision for the future.

I had the opportunity this summer to see, touch and smell this car up close — and to sit in the driver’s seat as I imagined myself flying down the highway. More importantly, I was able to gain insight into Tesla Motors, one of the most modern and interesting American technology companies of the decade, if not the century. Ken Morgan, the company’s senior finance manager, was on hand at the company’s Palo Alto, Calif., headquarters to give our group of LBW students a presentation about the business and the electric car he helped to build.

The Tesla Model S is a sleek, noiseless machine with a soft leather interior and door handles that fold out as you approach. It is also an electric car, so not only is it cost-effective from a long-term viewpoint (good riddance to gas stations), and convenient since you charge it overnight at home, but it is also efficient, and thus more environmentally sound, than gasoline-fueled cars.

[tweetthis alt=”” hashtag=”” url=””]My visit to Tesla was also inspiring because I was able to step inside the world of Musk, one of today’s pioneering entrepreneurs.[/tweetthis] Musk cofounded Tesla in 2003 as a designer, manufacturer and seller of electric cars and electric vehicle power train components. In the past 10 years, the company has moved closer to Musk’s vision of becoming an independent automaker that will mass-produce electric cars at an affordable price, and compete with big names in the automotive industry like Ford and General Motors. In addition to the Model S, Tesla created the Tesla Roadster, the first fully electric sports car that sells from upwards of $101,500.

In a 2009 interview with Knowledge@Wharton, Musk offered insight into his three passions, the Internet, space exploration and clean energy in the automotive industry. He was hugely successful with his first venture, PayPal, which he sold to eBay for $1.5 billion in stock. During the interview, he talked about his automotive business: “I am quite confident about the future of Tesla at this point,” noted Musk. “The important thing that Tesla needs to focus on is getting the right people on board, and making sure we make an extremely good product. Great companies are built on great products. When the product starts to become shoddy and uncompetitive, so does the company.” He also said, “Tesla is a very engineering and design focused company. Finding the best engineers in the world across the board — in areas such as power train, vehicle engineering, suspension handling, interior and safety — is extremely important.”

Musk has fascinating space-exploration goals as well. He started SpaceX in 2002, which stands for Space Exploration Technologies, based in Hawthorne, Calif. SpaceX’s plan has been to develop launch vehicles that will reduce the cost and increase the reliability of space access, by a factor of 10, for jobs such as lifting commercial satellites into orbit or transporting cargo to the International Space Station. His grander vision is to play an important role in making life multiplanetary. In another 2009 K@W interview, he said, “The idea is just to keep improving the cost of the rockets, improving the reliability, and making as much progress as possible towards that ultimate goal of helping extend life beyond earth.” In August, he unveiled plans for his ‘hyperloop,’ a new concept in high-speed travel that could move people from Los Angeles to San Francisco in about 30 minutes, which is about 800 miles per hour.

[tweetthis alt=”” hashtag=”” url=””]Musk’s amazing innovation was on my mind while I sat inside that Tesla Model S and listened to Morgan talk about the company and the industry.[/tweetthis] In the context of an automotive industry that has been struggling during the downturn in the economy, Tesla’s advances have been especially noteworthy. The Big Three U.S. automakers, including Ford, GM and Chrysler, have had cash-flow troubles. In 2008, GM and Chrysler requested government financial assistance and received millions in bailout funding that saved them from collapse. They are all now adding new jobs and becoming profitable again.

Back from the Brink of Bankruptcy

Meanwhile, Musk has been able to create a cutting-edge car and grow his company. In May, Tesla Motors proved its doubters wrong by making a quarterly profit for the first time in 10 years and turning cash-flow positive. Tesla initially expected to sell 4,500 Model S’s in the first quarter of 2013, with prices starting between $70,000 and $100,000 depending on the features customers chose. Instead, it sold roughly 4,900. Tesla also paid off its government loan of $450 million nine years early. But it wasn’t always successful. Tesla was so close to declaring bankruptcy a few years back that Musk was forced to invest even more of his own money to sustain it. Like many startups, the road to profitability has not been easy.

Tesla is an environment where engineers work overtime not because they need more money, but because they are inspired by a desire to work toward a grand vision, noted Morgan. He added that they all follow that vision; they want to create the best, most efficient and most beautiful cars in the world. [tweetthis alt=”” hashtag=”” url=””]In learning about that work ethic and long hours that Musk devotes to his ventures, I realized that even though hard work is demanding, it reaps incredible rewards.[/tweetthis] Musk’s attitude permeates his entire company, from the technicians working the assembly line, to the engineers of the cars, to the senior finance managers.

[tweetthis alt=”” hashtag=”” url=””]I came away from Tesla Motors understanding that leadership means investing yourself to the fullest capacity in what you believe. [/tweetthis]While everyone might not have the capabilities of Elon Musk, they do have the potential for greatness. Successful leadership means creating a business environment that is both an honor to be a part of and a pleasure to work for. Most importantly, it is about inspiring the people who follow you and who share passionately in your vision.

What is Tesla Motors, and where does it fit in today’s automotive industry?

Are electric cars Elon Musk’s only passion? How does Musk embody innovation? What does it mean to be a visionary?

Do you think we will eventually all be driving electric cars? What will this mean for affiliated businesses, like gas stations? Will they become obsolete? How will it impact global issues like America’s dependence on foreign oil?

Future of the Business World: Students in Vietnam Give Small Loans to Low-income Borrowers