Digital Rockers: Emerging Musicians Use Online Media to Turn Up the Volume

Maybe you caught Taylor Swift’s live stream on Yahoo a few weeks back. Yes, that was the 24-year-old music sensation releasing her new album, debuting her new Shake It Off video simultaneously on Vevo and answering Instagram, Twitter and Facebook questions from fans. More importantly, Swift was showing off her mastery of online media as a means of self and music promotion. Social media has changed the music business, which as KWHS explores, is especially powerful for lesser-known artists and performers.…Read More 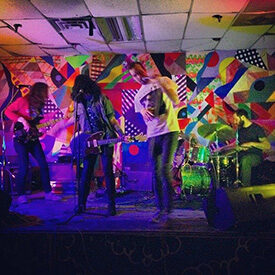 Did you know that The Beatles have 42,173,514 likes (and counting) on Facebook? With bygone superstars still casting long shadows, how many fans can possibly be left for new, yet-undiscovered recording artists? Can the young and ambitious ever catch up to the rich and famous?

Turns out, the online music fandom universe is vast. With more than 1.23 billion active users by the end of 2013, Facebook conveniently hosts more than a billion potential listeners who don’t even like The Beatles. That’s a pretty big audience for anyone — bigger, by a factor of four, than the entire U.S. population. And let us not forget Twitter, YouTube and all the other popular social media platforms, where followers and fans seem to multiply with each passing minute.

‘Music’s In a Really Great Place’

That probably helps to explain how recent indie sensation Courtney Barnett, 25, managed to play a bigger show in Philly in early 2014 than she ever did in her native Australia. Music is now a global industry — and with social media platforms enabling the development of small but fiercely loyal pockets of fans, there’s no telling which decentralized group of enthusiastic listeners will elect and import an unsuspecting overseas idol. Isolated fan bases might spell the end for enduring supergroups like The Beatles, but we can expect the rise of plenty more Barnetts.

With the advent of social media and affordable recording technologies, musicians can create anything they’d like to play. Just as importantly, consumers can demand whatever they’d like to hear. Barnett’s legions of Philly concert fans are no anomaly – as her 40,425 likes on Facebook suggest. Music and the music industry are changing, for better or for worse — and for up-and-coming artists, it appears to be for the better.

“Music’s in a really great place right now. Maybe not in the sense of being a lucrative industry, but in the sense of just being itself and being music,” says Mike Strianese, a self-described happy and broke musician.

Strianese, now 21, developed his intense love for music during his years at Farmingdale High School in Farmingdale, N.Y. When he picked up the electric bass guitar at age 15, he came into his own as a musician. That same year, Strianese began playing music with two groups of friends. By 17, he was flourishing as a bandmate: he was already writing songs, developing his craft as a bassist, and playing live shows at venues in his native Long Island. He cultivated a healthy knowledge for and appreciation of music theory, and began to pick up other instruments.

Strianese quickly realized that he didn’t have to limit his development to simply creating music. He could also capture it through the use of newly affordable recording technologies, and distribute it through social media channels that give free publicity to tens of thousands of bands like his own.

In the digital age, there’s a musician — and an audience — for everyone. The newly developed ease with which inventive minds can turn their ideas into sounds may represent the most important revolution in music-making’s history. Lots of musicians mean a crowded marketplace, which admittedly cuts into profit-earning potential as bands have to work especially hard to earn listeners. But the overwhelming advantage of easier music making is that it allows a greater number of minds to work toward creating new ideas and solving prior musical impasses. Music is becoming increasingly varied. Musicians enter uncharted sonic territory every day. More music in the hands of more people leads to unprecedented aural innovation — and innovation, in any industry, is a great thing.

After two years of developing as a songwriter and multi-instrumentalist, Strianese was already recording and producing his own music with friends and making it available to anyone with an Internet connection. His parents’ generation never could have imagined the ease with which young musicians would be able to create, produce and distribute their own original songs in the new millennium. Plenty of baby boomers in garage bands sprung for expensive trips to the recording studio. However, recording mere minutes of material could quickly drain all their resources, preventing them from moving on to play shows and sell records. Consequently, most garage bands never even made it out of the garage.

Strianese and his friends have faced a radically different musical climate in recent years. Strianese’s varied ensembles have used Ableton recording software to capture their music from the comfort of home. The band in which he currently plays, Cutters, has its own page on Facebook and on Bandcamp, a social networking and music-sharing site specifically for bands. Cutters, a punk rock band, also has videos of its performances on YouTube. Says Strianese: “When people want to record, they can record.” And once they have some tracks readied for consumption, bands can quickly share their music with audiences hungry for the next greatest thing.

Strianese admits that finding loyal listeners is difficult with so much music available online. The ease with which bands can record and share their music, though, has made it easier for acts like Cutters to book shows. These live shows, Strianese says, are some of the most important steps that musicians can take to promote themselves, while generating online friends and followers along the way.

You’ve probably never heard of Cutters. Even organized and talented bands with their own websites and recordings find it difficult to gain notoriety on the crowded Internet – good, old-fashioned offline and online marketing strategies still need to play a role. Cutters, with 688 likes on Facebook, plays frequent shows in Brooklyn, and the band is developing a network of enthusiastic fans. But even with all the local shows, Strianese isn’t quitting his day job as a Starbucks barista – nor is he dropping out of Queens College in Flushing, N.Y., where he studies creative writing.

All of the new technologies embraced by Cutters have, however, enabled the band to do something rarely achieved by the non-famous. In the summer of 2013, Cutters went on tour. The promotional strategy for this tour was, as Strianese says, “DIY” – do-it-yourself. The band used Google to locate venues on its proposed route. Cutters reached out to these venues through email and social media platforms, and sent recordings to those who were interested. Cutters spent a lot of time building up its itinerary. Nobody called the band members offering big bucks and free hotels to play a show. But all of their efforts paid off, if not financially, in the chance to attain the holy grail of band-dom – the tour.

And even without the live shows, social media has become its own kind of band tour – an online community that responds energetically to what it hears and offers opportunities for outreach and growth. Technology means productivity, which is hugely valuable to any musician. For Strianese, it fuels a passion. “Including Cutters, I’m involved with four projects, [and] I’ve had the luxury of being able to record so easily in my room,” he notes. Strianese acknowledges that he’s unlikely to make a living producing his own music. The ease and affordability of writing and recording, though, allow him to have a life outside of his music while still being able to indulge and satisfy his creative ambitions. For budding acoustic artists, Strianese’s assessment of the music biz speaks volumes: “Oh man, music is in a great place right now.”

Do you agree with the article’s assertion that “The newly developed ease with which inventive minds can turn their ideas into sounds may represent the most important revolution in music-making’s history?” Why or why not?

This article notes that it is hard to get noticed in a sea of aspiring musicians and bands on social media. What are some of the other challenges of today’s music business and of the notion that “In the digital age, there’s a musician — and an audience — for everyone?”

Do you know a hometown or local band that promotes itself on social media? What strategies does that band use to get its name out there? How many likes does the band have on Facebook? How many followers on Twitter? Interview a member of the band about the pros and cons of social media as a recording and distribution platform.

Career Insight: Adam Grant on What It Takes to Be Original and Get Your Ideas Heard

Venezuela’s Eugenia Carmona on the ‘Complete Chaos’ Afflicting Her Country