During the summer of Jesse Beyroutey’s freshman year of college, he headed to Mexico to work with a Non Governmental Organization known as The Hunger Project. In this essay, Beyroutey reflects on ‘the trendiness of poverty fighting’ and how he found deeper meaning by using his business skills for social good.…Read More 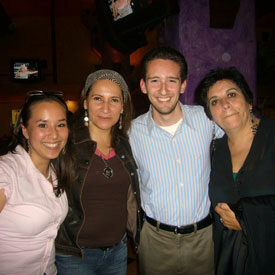 Jesse Beyroutey has a theory. He believes that the reason he and his peers are especially socially responsible these days — in other words, they genuinely want to help others and give back to society — is a function of the Internet. “People learn about things going on in the world around them and start giving due consideration to what they have to do professionally to be socially responsible,” he says. Beyroutey, a 2007 graduate of Manalapan High School in Manalapan, N.J., was always interested in using skills to help people, but he didn’t know quite how. That is, until the summer following his freshman year of college at the University of Pennsylvania’s Wharton School. Beyroutey headed for Mexico City to offer free consulting to a local NGO or non-governmental organization known as The Hunger Project. Here, Beyroutey, now a college senior, reflects on what he learned.

I’m sure you’ve noticed the trendiness of fighting poverty. There are commercials on T.V., fundraisers at school, and booklets of donation tickets in the supermarket checkout line.  There’s always an image, carefully engineered to tug at your heartstrings, of a young emaciated child in a faraway land looking up at you for help. That image tells a story – of someone less fortunate than you being unable to eat tonight. You can help now, and it requires precious little effort from you. Just put a check in the mail and eat dinner at peace with your conscience. You’ve done your part.

Extend this scene to a national, even global scale, and you’ve got a lot of donations.  Hunger, it seems, is a big business these days. With all that money flowing from the haves to the have-nots, one imagines that many poor people must be living happily due to the generosity of wealthier Americans.

But some of us don’t have the luxury of such an imagination.[tweetthis alt=”” hashtag=”” url=””] Any business school student knows that the economics of poverty is much more complex than simply distributing handouts to the needy.[/tweetthis] Impoverished people are stuck in an impossibly tangled web of social injustice, government corruption and psychological defeatism. Throwing money at the problem, appealing as it may be, cannot possibly solve it.

Over the past year I’ve studied business at the Wharton School, one of the most prestigious undergraduate business schools in the world. It’s an unfortunate truth that business students spend most of their time learning how to determine that a method or solution does not work. Ask about poverty on campus and your noble ideals will be shot down by people who tend to think practically, and not always with their heart.

My conscience craved something with deeper meaning than the self-interested business school mindset could offer. I found it in Penn International Business Volunteers (PIBV), one of the few groups on campus concerned with finding solutions to development problems that do work. PIBV promotes the use of undergraduates’ business skills for social good by sending students around the world to do nonprofit consulting work.

Fast forward through two semesters of fundraising, contacting non-governmental organizations (NGOs), and promoting awareness on campus, and it was my chance to join a Penn consulting team on a trip to Mexico in May 2008. We were slated to work for a charity out of Mexico City called The Hunger Project, which was having difficulty finding and maintaining investors.

My team did its homework. In the few weeks prior to the trip, we did broad research on the Mexican NGO climate, and learned all about the background of The Hunger Project. From reading its website, the mission of THP seemed frustratingly ‘soft.’ It listed itself as an empowerment organization, and its primary mode of operation was a feel-good vision/commitment/action workshop that was meant to psychologically motivate poor Mexicans to improve their lives.

We were skeptical before we had even met anyone from THP. Without giving it a chance, I dismissed the workshop idea as ineffective – a product of the imagination of well intentioned but uneducated people. These thoughts were deeply rooted in my business background. There couldn’t, in my mind, be any way to solve hunger without cold, hard economics.

Upon our arrival in Mexico City, my experiences conflicted so completely with my assumptions that it forced me to rethink everything I thought I knew about development.  Claudia, one of the managers of THP, changed my outlook forever when she gave us THP’s workshop, revealing the true value of a ‘soft’ empowerment activity. Mexican villages, we learned, are plagued not by a lack of funds but by a lack of desire to collaborate and form enterprises.

The workshop demonstrated to the villagers that quality-of-life improvements can only come through a clearly defined vision of a goal for their communities and a commitment to acting on that vision together. Handouts and subsidies could do nothing for the poverty problem, but simply talking to people built roadways, elementary schools and microenterprises.

Women are the center of THP’s attention, and for good reason. Men in Mexico often marginalize their wives’ ideas and abilities, keeping them pent up in houses and relegated to menial tasks. We learned of Margarita, a woman from Chiapas who was only 19 – just a year older than our team. She had attended a THP workshop at the age of 10, against her father’s will, and learned how to fight for herself. In the ensuing years she grew to become a leader in her community, organizing church improvement projects, helping women form a council and building new avenues for young women’s educations.

Hearing Margarita’s story convinced me that showing faith in others and helping them believe in their own capabilities are critically important to inspiring real change. No matter how much theory you learn in class, the solution to development problems is often more deeply rooted in the human psyche than in economics.