Teens across the U.S. are increasingly starting nonprofits and giving back to their communities, all the while learning critical business skills. Winners of the Prudential Spirit of Community Awards talk about their activism and journeys as young social entrepreneurs.…Read More 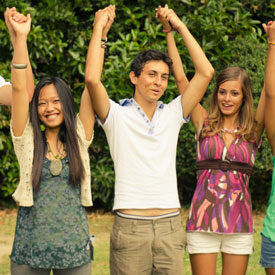 In business, social entrepreneurship is getting a lot of attention these days. While social entrepreneurs have as much creativity, passion, drive, energy and appetite for risk as traditional entrepreneurs, they are looking to solve the world’s problems and maximize social value over profits – and to do so on a grand scale. Raviv Turner, cofounder and CEO of Guerillapps, a startup focused on developing social games to support real-world causes, told Forbes magazine this month, “The first step to becoming a social entrepreneur is identifying a social problem in need of a solution. Aspiring social entrepreneurs need not look too far to find social issues in need of solving: poverty, hunger, poor education, environmental damage, political suppression, disease and social inequality,” to name a few.

A growing number of teenagers are drawn to the social entrepreneurship model – and this concept of giving back to their communities. They are defining success not only by what they can achieve for themselves, but also what they do for others. This mentality is prompting young people like Candonino Agusen, a junior at Kealakehe High School who spoke to Knowledge@Wharton High School from his home in Kailua-Kona, Hawaii, to plan a future with a social impact: “I’m interested in becoming a doctor, a general practitioner, but after I complete my residency I plan on joining Doctors without Borders and helping overseas and third-world countries,” notes Agusen.

Nancy Lubin, CEO of DoSomething.org, a nonprofit that helps young people to engage in philanthropy, recently told Crain’s New York Business, “Kids today just saw their parents go through a recession, get laid off and struggle. They look around and say: ‘What’s the point? I don’t just want a second car in my driveway. I want a life of purpose.’” This, along with access to technology that brings the world closer than ever, is inspiring a new generation of social entrepreneurs in training.

Samantha Kerker, 17, took macroeconomics as a freshman at Atlantic Community High School in Delray Beach, Fl., and fell in love with entrepreneurship. Inspired to start her own business, she invested $2,600 of her money to launch a website selling tie-dye clothing, created from chemicals and colors that she mixed herself. Six months later, she had $7,000 and a desire to do something meaningful with her money.

When students from Lynn University in Boca Raton, where her mother works, lost their lives in the 2010 earthquake in Haiti, Kerker had her answer. Unable to travel to the disaster-stricken country, she chose the next Latin American country most in need: Nicaragua. “My mom and I packed our bags and lived, slept and breathed in third-world country poverty for a week. With the money, we built a house for a homeless family and a latrine. All the people were incredible, humble and so happy that we were there,” says Kerker.

Back home, Kerker’s friends asked her if she would stay in touch with the family she helped – possibly through Facebook. “I said, ‘Facebook friends? They don’t even have running water or electricity!’ That’s when I realized that my friends didn’t get it,” notes Kerker.

And so was born Students for the Poor, a network of clubs operating in all 28 high schools in the Palm Beach County school district that mobilizes student participation in community service projects and global outreach. With Kerker at the helm, all the clubs held an outdoor amphitheater concert in February to raise $30,000 to build a school in Nicaragua and to sponsor 60 students from the school district to travel to the country over spring break 2013. “I want the students to be part of the building process and experience a third-world setting,” says Kerker, who this month was one of 10 high school and middle school students to win a national Prudential Spirit of Community Award for her outstanding volunteer service. “My hope is that they’re going to go there and come back and be inspired like I was.”

In this age of connectivity, when getting a friend’s attention is one FB post away, many aspiring social entrepreneurs are rallying their classmates around causes. Jordyn Schara, a junior at Reedsburg Area High School in North Freedom, Wis., runs Foundation for HOPE (Helping Our Peers Excel), a nonprofit that mentors young people to get involved in their communities. In part, says Schara, the organization is a way to “house the community service projects I do,” which include a program that ships books and magazines to soldiers in Iraq, an initiative promoting reading through comic books for elementary school-aged kids, and a project to collect and dispose of unused or unwanted pharmaceuticals so that they do not end up in the water supply, while raising awareness of prescription drug abuse.

“What I’ve enjoyed the most is finding something in my community that isn’t being addressed and jumping in to address it,” says Schara, who wants to major in broadcast journalism in college and become a war correspondent. “My program is in over 18 states, and I hope to take it global. Our duty as human beings is to help each other.”

With a great-grandmother who was “very close” to Ghandi, Neha Gupta says that social activism is in her DNA. Still, the sophomore at Pennsbury High School in Fairless Hills, Pa., believes that her journey starting Empowering Orphans, an organization that has raised $500,000 in money, products and services for orphans in India and locally, has been personal as well as professional. “This process has taught me that every person has a voice,” notes Gupta, who has learned to navigate the world of grant applications and organizing fundraising events. “I really didn’t think that I was going to make an impact at all. I thought I could help maybe 100 kids. It’s taught me that when I use my voice, it can have amazing effects.”

The next generation of social entrepreneurs? Yes, if they have anything to say about it. “I’ve learned leadership, politics, organization, negotiations, procedures, documents, legal issues, liability issues. I would call people to set up meetings and they wouldn’t call me back. I had to keep persisting,” says Kerker, who intends to study social entrepreneurship in college. “I’ve had so many bumps in the road and so many people telling me it was impossible to do what I wanted to do. I proved them wrong. Ten years from now, I want to create my own international nonprofit business.”

What is social entrepreneurship?

How do the students in this article reflect the qualities of social entrepreneurs?

Is it important to have both a local and global mission these days? Why or Why not?

2 comments on “The Power to Lead: The Next Generation of Social Entrepreneurs”

Thinking Like an Entrepreneur in a Time of Crisis