These days, both students and parents want to get the most value from their huge financial investment in higher ed. One way to clarify your college path is to take a gap year – a year off to explore new opportunities and better prepare yourself for the rigors of college and for what you would like to study. This KWHS article helps you to understand what a gap year is all about. Once you’ve read it, be sure to listen to our podcast with a young “gapper.” …Read More 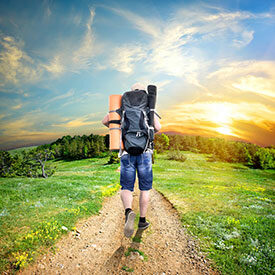 Are you uncertain about graduating from high school and diving right into college? If so, you are not alone. More high school graduates are postponing their freshman year of college to pursue a gap year.

A gap year “lets a student step away from the formal classroom and have a break…and learn in a different way, [while] trying to get a sense of the relevance of material they’ve been cramming in their heads for 12 years, whether it’s a language they’ve been studying in school, or checking out a potential passion,” says Holly Bull, president of the Center for Interim Programs, an independent gap year counseling firm in Princeton, N.J.

Often, students who take gap years have been admitted to a college and are given the chance to defer their admission for a year. Some colleges, such as Princeton and Brown universities, have their own programs for students interested in a gap year before entering as freshmen.

Whether they choose to volunteer overseas, get an internship or seek out other experiences, students are finding that taking a gap year can help them mature and make smarter decisions related to their future career paths. It can also be a way for students to de-stress and become more self-aware. “I went to a really rigorous high school. By the time that I got out of high school I was tired of doing school work and thought I needed some time away from that,” says Samantha Krieg, a neurobiology major who just finished her freshman year at Georgetown University in Washington, D.C. Krieg, 20, who is Bull’s step-daughter, says she had been working so hard at The Lawrenceville School in Lawrenceville, N.J., that she started to lose track of what she really wanted to do.

During her gap year, Krieg spent three months working with an organic farm near Princeton, and went to Florence, Italy, for three months to study Italian. “I actually didn’t know any Italian when I left… I only spoke Spanish. But Spanish and Italian are similar, so it was an easy transition [to make],” she says.

While living in Florence, Krieg had her own apartment and did not know any other Americans there. The first couple of weeks were tough, but she made friends with some people from Italy and Australia who she still keeps in touch with. Krieg also spent a month in the Bahamas getting certified as a yoga instructor and worked as an intern at a Dublin, Ireland, design collective that sold handmade goods like jewelry and handbags. “Getting a reality check of what a field is really like is helpful, doing your own laundry or cooking for yourself, navigating a city — these life skills are so helpful for college students,” says Bull. “I think students are woefully unprepared when they graduate from college and have to enter the job market.”

While interest in gap years is growing in America, less than 1% of U.S. students take them, compared with 30% in the U.K., according to Ethan Knight, executive director of the American Gap Association (AGA), an accreditation and standards-setting organization for gap year programs. Knight says he’s seen a lot more interest in gap years in the U.S. over the past two to three years, and attributes that to more students looking at the financial value of a degree. Students, as well as parents, are asking financial questions about getting an education and don’t want to waste time figuring out what they want to do.

Krieg emphasizes that a gap year can help students save time and money. “If you really don’t know what you want to do in school, [a gap year] can save you money in the long run [because it helps you to avoid being in] school for five years and changing your major,” she notes. “It may seem like extra money, but it can save money.”

The amount that a student will pay for various experiences during a gap year can vary, but it is not uncommon for formal programs to cost several thousand dollars. The cost of taking time away can be prohibitive for many young people, and often gap years are seen as luxuries for those who are more affluent.

To help provide gap year experiences for students of more modest means, some organizations have begun offering need-based scholarships. Gap year programs surveyed by the AGA gave just under $3 million in need-based scholarships in 2013, according to Knight, and he expects that number to rise to $5 million this year.

‘I Don’t Think a Gap Year Is Right for Everyone’

Part of the AGA’s mission is to accredit gap year programs that meet certain standards, and to provide more information to people who are considering them. “We try to take the guess work out of gap years,” notes Knight. “One of the reasons is that when you Google gap years, you don’t know what you’re looking for. Then how do you know which one is safe; which one is going to provide a quality experience of a certain caliber?” One of the areas the AGA scrutinizes is whether or not a gap year program offers insurance to students. “Any AGA-accredited organization has to have uniform medical insurance,” says Knight. He adds that medical care should include mental health.

So what should students look for when deciding whether or not to take a gap year? Knight recommends that they look at the AGA’s website (linked below) to review various college deferral policies and look for accredited organizations. Gap year fairs are another source of information about the variety of available programs. The AGA also has a list of 20 questions to help guide students’ decision-making about gap years. Some of those questions are:

Finally, students need to think about their interests and goals when deciding whether to take a break from their studies. “I think everyone can benefit from a gap year, but I don’t think a gap year is right for everyone,” Knight says. “If a student feels pushed into it, it may not work well.”

For Krieg, having a gap year was a transformational experience. “It completely changed my perspective on what’s important,” she says. “It changed what I thought it means to be a happy, whole person. When I was younger, I thought that you had to [follow] a certain path to be a good person, to be a complete person, and I didn’t understand [the option of] taking other paths. After my gap year, it changed the emphasis on that.”

What life skills did Samantha Krieg gain while on her gap year? How do you think these various experiences helped her to become more self-aware?

Krieg says that her gap year “completely changed my perspective on what’s important.” How could one year of her life have such a lasting impact? Relate this to your own experience — why do you think she had such a narrow view going into her gap year?

Do you know someone who has taken a gap year? Where did she go? What did she do? Interview her to find out the details – including what she learned about life and about herself – and present your findings to the class.