In the pure rising-star sense of the word, Rachael Chong, founder of Catchafire, is, well, hot. She recently made Fast Company’s list of the 100 Most Creative People in Business in 2012, and she is quite popular on the media circuit. While finance used to be her professional focus, she now helps business people build a very different kind of wealth – by giving back.…Read More 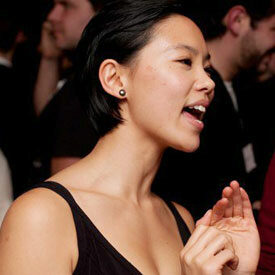 At age 21, just after she finished her undergraduate degree, Rachael Chong took an investment banking job in New York City. She and her young fellow  ibankers were encouraged to take on some occasional pro bono work on the side. So she signed up for a project, and Chong — who is a petite 5’2” — found herself hauling logs across a schoolyard in the Bronx. “I was doing manual labor, and it really didn’t fit my talents,” Chong says of the experience. “That was frustrating.”

She looked online to find a volunteer opportunity that would allow her to use her newly minted financial skills. But after six months of searching nearly every day, she still hadn’t found a project that was a good match. That’s when she got an idea.

Five years later, she launched Catchafire. A for-profit “social mission business,” Catchafire matches professionals with nonprofits that sorely need their skills. Chong is both founder and CEO, and she’s seen the organization blossom in three short years: Catchafire now has 10,000 volunteers and 2,500 nonprofits in its database.“Our bigger mission is to bring talent and high-quality professional services to the social-good sector,” says Chong. “And we’re doing that through this innovative way, which is pro-bono matching.

Catchafire charges nonprofits a “match fee,” which is set on a sliding scale, to list their projects in its database. This fee provides a steady stream of earned income, Chong says, but it also ensures that nonprofits are committed to the process before they take on a volunteer.

Potential volunteers don’t have to pay anything to offer their services, although they do need to fill out an application. They start off by uploading their résumé into the Catchafire database. Their background information, skills and interests are then run through an algorithm, which matches them with the projects that would be a good fit.

Brooke Rothman, who works in advertising in New York City, became a Catchafire volunteer earlier this year, when she found herself between jobs. “I wanted to keep myself fresh — to make sure that I was still doing the things that I love,” says Rothman.

So she filled out an application with Catchafire, and soon found herself working on a brand-messaging project for a small nonprofit in India that supports under-privileged children. She spent an average of  five hours a week on the project over the course of a few months and found the experience incredibly gratifying.

The woman whom Rothman was working with “told me that she felt like she’d found gold when she found me,” Rothman says. “I kind of wanted to cry. It was this great acknowledgement.”

“It would be great for more organizations to know about Catchafire and put their projects on there,” adds Rothman, who has already signed up for a second volunteering stint. “I would love for the word to spread to potential volunteers. It’s a nice reminder that you do make a difference.”

Connecting on a Human Level

That’s the kind of impact that Chong has long dreamed of making. Born in Australia, Chong moved to China when she was 8 because her mother worked for the Australian Foreign Service. She lived in the region until she left for college, attending the international school in Beijing and the American school in Taipei.

Back then, in the early and mid-1990s, China was “squarely considered a developing world country,” Chong says; there was poverty everywhere. As an adolescent, she had her first volunteering experience at an orphanage filled with young Chinese girls who had been abandoned by their parents.

Years later, after finishing her undergraduate degree at Barnard College in New York, Chong spent time in Central and South America, East Africa and Bangladesh. Those experiences moved her, Chong says, as she started to connect “on a human level” with the people she met on her travels. “These people were obviously just like me, but they were born into a different circumstance for no reason that we can make sense of,” she says.

Back in the United States, Chong earned a Master’s degree in public policy from Duke University, then took on a job helping to set up the U.S. affiliate of BRAC, the world’s largest non-governmental organization. Catchafire came next.

That was nearly three years ago, and Chong says that she’s never looked back – she’s too busy thinking about where she wants to take the organization next. She has big dreams: 10 years from now, Chong hopes that Catchafire, which currently has a staff of 20 people, will be a household name among both professionals and nonprofits. “We’re always looking to grow and push ourselves,” she says, “because we have a big mission to accomplish.”

How did Rachael Chong come up with the idea for Catchafire?

Why did she leave a promising career in investment banking?

How important has a global perspective been to Chong’s career decisions?

How might she grow Catchafire to help it become “a household name?”