Honk if You Love Humanoid Robots

Think Honda meets Star Trek: The Next Generation. But Honda’s ASIMO, which can identify oncoming cars through its eye camera, calculate speed and choose the most appropriate route, will soon be sharing the robot limelight. Researchers are working to deliver clever androids to our doorsteps – including ones that can pop mac-n-cheese into the microwave, unload a dishwasher or put out a forest fire.…Read More 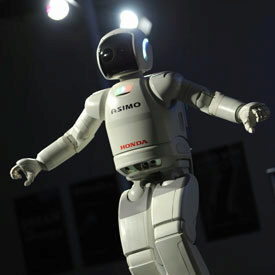 While he may rock in the field of computer science, James J. Kuffner Jr. admits that he is no culinary genius. In fact, after a long day at work it’s all he can do to pop a mac-n-cheese into the microwave.

This is where Kuffner’s technical talents may come in handy, more specifically, his job as a researcher in the motion control of humanoid robots — life-sized, walking robots (“bots” for short) that are programmed to do human tasks, like crack an egg or find the ketchup on the back shelf of the fridge. Kuffner’s future vision of the kitchen looks like this:  “I’m on my way home from work. I call up my humanoid and say, ‘OK, tonight I would like a soufflé, and the humanoid would be able to make that perfectly for me every time. He would know the temperature and the finicky characteristics of my oven and he would also know that I don’t like that much salt.”

Humanoid robotics is no longer the stuff of sci-fi fantasy and high school competitions. Kuffner, an assistant professor at Carnegie Mellon’s Robotics Institute in Pittsburgh — America’s largest robotics research facility — believes the U.S. is less than two decades away from welcoming humanoid robots into their homes. They would resemble the Roomba — that little round vacuum that skims through your house sucking dust — only bigger, better and looking a lot more like you and me.

Just as the technological advances of the automobile and the computer changed forever the way we live, so too will robots. “All of these different technologies are being developed and converged,” says Kuffner, adding however, that it will be “15 years before the price point becomes cheap enough so the humanoid robots become widely affordable.”

Robot Central, an online research and analysis service covering the robot economy, says the global robot marketplace is predicted to grow from $10 billion in 2007 to over $50 billion in 2012. Companies around the world are seizing that potential. Their creations are becoming faster, smarter and more life-like. While the U.S. excels at information technology, Asia has emerged as the hardware leader. Take, for instance, Toyota, which in December 2007 unveiled its violin-playing personal transport robots. YouTube watchers may have caught a recent creepy video posting of Simroid, a dental training robot with an alabaster complexion, head and body motion and, well, sensitive teeth. Simroid is a recent product of Japan’s Kokoro Company.

And then, of course, there’s Honda’s ASIMO, affectionately known as the world’s most advanced humanoid robot, which celebrated its 10th anniversary in October 2010. ASIMO is at the forefront of humanoid robotic research. In December 2008, for instance, Honda Motor Co. announced new intelligence technologies that enable ASIMO to identify oncoming people through its eye camera, calculate traveling direction and speed, predict movements and choose the most appropriate path. The good news: now the thing won’t run us over.

Honda’s goal is to develop a robot that can be useful in a real-world environment where it needs to coexist with people. It also wants to make money from a potential big seller that fits well with the company’s automobile line and other mobility products, says Alicia Jones, supervisor of corporate communications for American Honda Motor Co. in Torrance, Calif. “We are firmly committed to the marketability of humanoid robots as a business model,” says Jones. “But more research and development still needs to be done to ensure ASIMO is a viable helper to people.” Humanoid robots, like ASIMO, are expected to help people who lack full mobility like the elderly and disabled or perform tasks that are harmful to humans  — like putting out fires or fighting wars.

But as an article in Wired magazine pointed out, “Hurdles faced by bipedal robots are not insignificant. They generally require extravagant funding and human resources, and the payoff is more uncertain than it is for more specialized robots that address specific needs.” Kuffner suggests that the humanoid robot market will be an evolution fed by fanatical researchers (like himself) and hobbyist communities sharing online expertise. “We’re not going to have a Jetsons-type robot for sale right away that we can buy in Wal-Mart,” says Kuffner. “We’ll probably start with a torso mounted on wheels that will be very good at doing one thing like loading and unloading a dishwasher. Then we’re going to get a whole bunch of programmability and variation.”

Will Americans embrace the idea of sharing their living rooms with robosapiens? Perhaps the lesson of humanoid acceptance comes from our youngest generation. Researchers from the University of California, San Diego recently observed pre-schoolers accepting a Sony humanoid robot named QRIO as their peer. When a weak battery prompted the robot to lay down, kids approached it, covered it with a blanket and said, “Night, night.” Toddlers bonding with bots: It doesn’t get more domestic than that.