Some 75% of kids ages 12 to 17 use their own cell phones to place calls, text and search data. How much is that costing you? Now’s the time to learn the economics of your cell phone so that you’re better prepared to track usage and contain costs when mom and dad cut the cord. …Read More 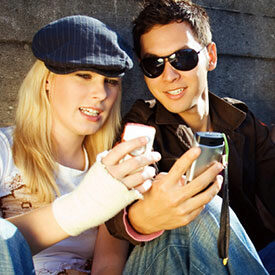 When Gwen Truman turned 16 last year, her parents fulfilled a wish for the North Carolina teen: She got her own cell phone.

From the start, Truman knew the ins and outs of her family’s cell phone plan and the rules that she had to follow to keep her privilege – basically, do chores around the house and not run the family’s plan over its calling or texting limits.

Now that her family’s plan has been upgraded to include unlimited calling and texting, she’s not as concerned about her hours-long phone calls to her grandparents. But she and her younger brother, David, 14, do share four gigabytes of data each month, and that’s where Truman says she has to keep a keen eye on her usage. “If I know that I’m going to receive a message, I’ll check Facebook really fast, but that’s about it,” she says of her mobile Internet habits.

Keeping track of cell phone calling minutes, texts and data may seem like a lot of work, but it’s a good way to learn how to keep a budget, especially if you’re paying part of your bill. And with 75% of kids ages 12 to 17 using their own cell phones, according to the Pew Internet & American Life Project, plenty of students should try to ace cell phone economics before heading off to college or the working world, notes Peter Dunn, an Indianapolis personal finance expert, author and blogger known as Pete the Planner. “Everybody hates budgeting [planning how you will spend available funds], but the funny thing about a cell phone is that it’s the perfect thing to teach budgeting,” he says. “You’re budgeting how much money you spend per month, plus your minutes, texts and data. It’s a little more complex than a household budget, but this is a good opportunity to master the process.”

That process begins when you sign on for one of three cell phone plans:

Individual plans cover a single phone, with no sharing of minutes, texts or data, but have a monthly fee for the length of a contract. Typically phone companies won’t allow teens to get an individual plan until they’re 18 and legally allowed to sign a contract.

Family plans allow multiple people to have their own phones and share pools of minutes, texts and data. This plan involves a monthly cost, and the phones and service are part of a contract that usually lasts one or two years.

Prepaid or pay-as-you-go plans cover one phone, but don’t require a contract or set monthly payment. Some have a monthly flat fee for service, while others allow users to pay only based on how much use the phone gets each month.

With any of these plans, it’s important to know some basic information, including:

Dunn says that even those with unlimited calling, texting or data plans should look at their bills (or ask their parents) to understand how much they’re using their phone. “It’s important to take two minutes every month to look at your statement. It’s easy to develop a stupid habit of being afraid to see what’s on there,” Dunn notes. “If you can look at how much data you’re using, how many texts and calls you make can help you shape your behavior.” Most companies will let you switch your calling, texting or data plans to match your usage, he adds.

But remember: Unlimited doesn’t always mean carefree cell phone use. Some companies will “throttle” data use, or slow down your data speeds if you hit a certain threshold each month even on an unlimited plan. Unlimited calling and texting plans exclude most international travel, so Dunn urges caution when heading overseas.

It’s especially important to keep track of costs because, like credit cards, unpaid cell phone bills can be blemishes on credit reports and make it harder to get loans for college, cars and houses. (When a person uses credit, such as making a purchase using a credit card or paying a bill, the lender sends information on payment history and balances to a credit-reporting agency. The information supplied by lenders comprises a person’s credit history and is contained in an individual’s credit report.) When the phone is in a parent’s name, it won’t directly affect your credit, but once you turn 18 and get your own phone, that unpaid bill can mess up your credit, too.

Truman says she has been very careful about her mobile Internet usage in the past year. She’s doing what Dunn suggests — keeping an eye on her data throughout the month — which is helping her rest easy that her phone habits won’t get her, or her parents, in trouble with Verizon. “For the past few months, we haven’t gone over (our data plan),” she says. My mom will check on the account during the month to let us know if we’re running into trouble, but we haven’t had a problem yet.” Still, Dunn should proceed with caution. According to a 2010 report by the Pew Internet & American Life Project, older girls who text are the most active, with girls between the ages of 14 and 17 typically sending 100 or more messages a day or more than 3,000 texts per month. That might quickly throw the Truman family plan off-balance.

Is understanding the economics of your cell phone like budgeting? If so, how?

How can unpaid cell phone bills get you into trouble?

If you have a cell phone (if not, ask your parents), have you ever gone over your monthly allotment of texts, calls and data? By how much? How much did it cost you/your parents? How did you modify your cell phone use?