Carter Roberts of the World Wildlife Fund Journeys to the Woods, the Amazon and a Legendary Place for Tigers

Carter Roberts is president and CEO of the World Wildlife Fund, a nonprofit group that works to conserve nature around the world. From his childhood exploring the woods near his home, to his career protecting habitats in the far corners of the earth, Roberts has fostered a connection to the natural world. His job is as diverse as the ecosystems he visits. One day he may be negotiating with the president of a corporation, and the next he is sitting on a dirt floor talking with villagers about the value of saving tigers. In the end his message is the same: we’d better start protecting nature before it’s too late.…Read More 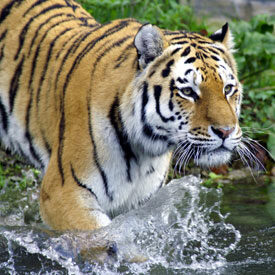 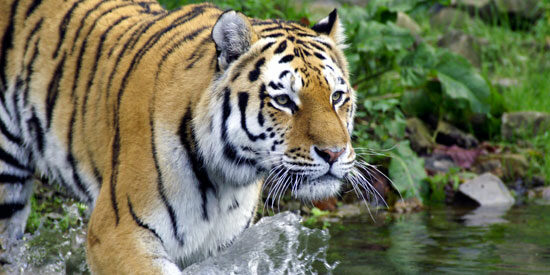 Carter Roberts is president and CEO of the World Wildlife Fund (WWF), a nonprofit group that works to conserve nature around the world. Roberts joined WWF as Chief Conservation Officer in 2004 and was named to his current position the following year.

Before coming to WWF, Roberts established new programs in Latin America for The Nature Conservancy, led strategic planning efforts that charted the organization’s aggressive growth strategy of the past decade, and led their Massachusetts Chapter as state director.

WWF keeps him busy conserving the world’s greatest ecosystems while working with government and business to influence market forces throughout the world. He talked with Knowledge@Wharton High School about his passion for nature, his work and the value in telling stories.

Knowledge@Wharton High School:  What is the most interesting environmental project you have ever worked on?

Carter Roberts:  To me, it’s unlocking the complexity and impact of supply chain throughout the world. So we’re seeing in the Amazon, the eastern edge of the Amazon is getting cut down to plant soybeans to ship to China, to feed cows and chickens, to meet the new needs of the growing middle class in China. So if you want to save the Amazon, you’ve got to go all the way to China, and you’ve got to find a better way to produce soy with less impacts, less land, less water, less inputs. And it’s the buying power in China that helps make that happen. So that’s fascinating to me, because you need to navigate different cultures, you need to navigate global trade, and bring all the buyers and producers of a commodity together to save the Amazon.

Knowledge@Wharton High School: Where in the world today is the greatest need for activism?

Roberts: Every two years we produce a report called “The Living Planet Report” that compares the demands we place on the planet with the carrying capacity of the planet to produce things we need to survive. About five years ago, we started to exceed the carrying capacity of the planet. We need to find new ways to be more efficient in our consumption patterns, the way we live our lives, the way we run our businesses, the way we buy and produce the things that we depend on every day. So activism that forces companies and governments and consumers to think about efficiency, and to think about their consumption patterns, is profoundly important. And where is that most important?

In the United States, where our consumption patterns are many, many, many multiples of other cultures around the world. And leadership needs to start here.

Knowledge@Wharton High School: What forces do you consider, from an environmental perspective, to be the most threatening to businesses, and why?

Roberts: Climate change has been demonstrated over and over and over again to have a huge impact on businesses in terms of flooding, storms, change in weather patterns, instability, insecurity. All those things are going to affect businesses in terms of the availability of the things they need to produce their products, the stability of the countries where they work, and the demands that everyday people are going to place on those companies to respond to what is a global crisis.

There’s another problem that people don’t talk as much about, which is resource scarcity. That great sucking noise you hear is the U.S. and China and India and other countries depleting the fisheries, the forests, the streams around the world, for their manufacturing base. We have to find a way to get that under control so that we live more efficiently.

Knowledge@Wharton High School: You touched on this a little bit already. Can you explain the concept of connecting the dots, and how market forces affect the World Wildlife Fund’s conservation efforts?

Roberts: When you buy a cup of coffee, you think you’re just buying a liter of water and a few coffee beans and a little bit of milk. But when you look at what it takes to produce every single one of those ingredients, it’s staggering. The amount of water it takes to produce sugar in a cup of coffee is astonishing. The amount of water it takes, and land it takes, and energy it takes, to produce every single part, from the lid, to the cup, to the coffee, to the milk, to the sugar, it ends up being well over 140 liters of water to produce a liter of coffee.

And the reason it’s important to us is, when we are trying to save elephants in Africa, or jaguars in the Amazon, we’re seeing their habitat disappear because of all those impacts. The water is being pulled out of the system. The trees are being cut down to grow the crops needed for the things that go into a cup of coffee. And so the way products are designed, the way their raw materials are sourced, is profoundly important to saving the planet.

Knowledge@Wharton High School: What are some examples of how The World Wildlife Fund is partnering with businesses to reach its goals?

Roberts: We do any number of things. On the commodities front, we’re bringing together buyers like Wal-Mart, producers like Cargill, and people on the ground in places like Borneo, the Congo, and the Amazon, to look at best practices in how soy or palm oil or cotton, or whatever commodity, are grown and sold. We’re also doing deeper partnerships with companies like Coca-Cola and Wal-Mart, who are making breathtaking commitments to reduce the amount of energy and water and local impacts on the ground in the products that they sell. For us, there’s great leverage in working with these companies, because they’re global, they have millions and millions of customers, and they have great influence over the way things are produced all the way around the globe.

Knowledge@Wharton High School: So it sounds like you’re saying that corporate America is genuine in its efforts towards conservation. Do you feel that?

Roberts: Parts of corporate America are genuine. It all depends on the leadership of the company, CEO, all the way down. It also depends on the particular company and its culture. And if other companies could emulate what Wal-Mart and Coke and others have done, we’d be a whole lot better off.

Knowledge@Wharton High School: Did you know as early as high school that you wanted to follow an environmentalist path?

Roberts: When I was a little kid, I wanted to be an archaeologist. But mostly, when I was a little kid, I used to disappear in the woods behind our house, turn over logs, look for salamanders. And I basically fell in love with nature. And for me, it is a central part of my life. And I can’t imagine either my kids or our society living in a world that has no nature. And not just because of the beautiful animals that live there and the renewal you get when you disappear into it, it’s because the fish we catch comes from nature, the fish we eat comes from nature, the forests we love soak up a tremendous amount of carbon dioxide. That’s related to climate change. And the rivers that we enjoy provide drinking water to half of the people on the planet — and, actually, ultimately, all the people on the planet, depending on how you count it. And so I fell in love with nature as a little kid. As an adult, I see that we can’t live without nature. And we’d better do something to protect it before it’s too late.

Knowledge@Wharton High School: What can high school students do to get involved and to help the environment?

Roberts: First, get out into the woods. It’s really important for people to be connected to the natural world that surrounds us. Second, talk to your parents about the decisions they make and the decisions you make. Your parents are all working in institutions, whether it’s businesses or governments, or non-profits, that have a major impact on the planet. So talk to your parents. Ask them what they’re doing to address the issues of climate change and resource scarcity and biodiversity laws. There’s tremendous power in people and the decisions they make. And there’s tremendous power in telling stories. Tell stories about what you care about, and what you hope your parents and your friends will do.

Knowledge@Wharton High School: Can you tell us a story about something that has really impacted you in this work?

Roberts: A year ago, I traveled to the Himalayas and visited a legendary place for tigers called Chitwan National Park. It is a grassland system that is right at the foot of the tallest mountains in the world. Breathtakingly beautiful, and a place where tigers once lived in abundance, and now there are just a few left. The government of Nepal has figured out a scheme where local communities around the edges of this park receive half of the income from the park. And historically, it was local communities who were poaching the tigers and cutting down the trees and ultimately driving them to extinction. But as a result of this arrangement, local communities now see that it’s in their best interest to restore the grasslands, restore the forests, and even restore the tiger populations.

And as a result, tiger populations are increasing. The forests are coming back. And I sat on the dirt floor of the households of some of the local communities and talked about their experiences, and seeing their eyes light up when they realize their ability to make a difference in not only restoring these beautiful animals on the planet, but also, doing something that ultimately brings money back to them and to their children.

Environmental activism and awareness is so much more than understanding that our planet needs protecting. What other areas does Carter Roberts address that motivate the environmentalist approach?

Roberts’ love of the environment started at a very young age. That passion has greatly influenced the course of his life. Do you have a similar passion? Discuss the things that feed your soul and how they might shape your future.

Inside Innovation: Tackling the World’s Most Pressing Problems