On November 6, voters re-elected Barack Obama, a Democrat, as the 44th president of the U.S., defeating Republican challenger Mitt Romney. KWHS spoke with high school students around the country to get their insights on, and reactions to, the election process and the issues it raised for voters. …Read More 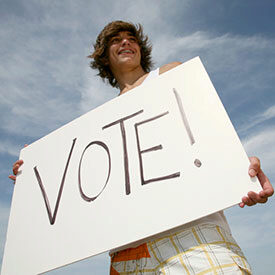 The 2012 U.S. presidential election is history, and in a victory over Republican challenger Mitt Romney, Barack Obama, a Democrat, will spend four more years leading the country. Whether you agree or not with his administration’s policies on the economy, education, health care, taxes, the environment and foreign relations, one thing is for sure: In the next four years, two high school students will be living in the White House.

Right now Malia, 14, is a freshman, and Sasha, 11, is in middle school, both attending Sidwell Friends School in Washington, D.C. When the next presidential election rolls around, Malia will be 18 — just old enough to vote for her dad’s successor (he can only serve two consecutive terms), and her sister will be a high school sophomore. Much has been written about the Obamas’ devotion to giving their daughters a normal life, including (as often as possible) family dinners at 6:30 p.m. Can you imagine the conversations around that dinner table? The first daughters are destined to be politically aware.

How about you? This fall, Hannah McCarley, a senior at Washington High School in Charles Town, West Virginia, spoke to KWHS about her experience as a delegate at the Democratic National Convention. “I think there is an interest in politics when you know that it is directly affecting you,” she noted. “Media needs to be more geared toward youth. A lot of media talks about youth, but it doesn’t talk to youth.” So KWHS set out to ask some members of the so-called Malia Generation for their reactions to this year’s election and their thoughts on the issues.

First was the question of exposure: How tuned in were students to the campaign process and results? While some high schools allowed the election to pass by with very little fanfare, still others found ways to get their students engaged, many of who are still too young to vote. Take, for instance, Cooper City High School in Cooper City, Fl. “Every four years when the election happens, the school’s government honors teachers have their students participate in a mock debate and election where they take on the roles of the president, vice president and members of the opposing political party,” notes Spencer Pearlman. “As a junior, we observed the mock debate and election.” Taylor Guttesman, a junior at Hopewell Valley Central High School in Pennington, N.J., adds that she and her classmates watched the final presidential debate between Obama and Romney in history class to examine the main points and determine “whether or not they answered the questions or went astray.”

And while Guttesman’s AP language and composition class turned to The New York Times for political insight and analysis, she admits that social media offered the most colorful and constant discourse in the days leading up to Nov. 6. “The whole week before the election, every other comment on Facebook was, ‘Why is this happening?’ or ‘I can’t believe this!’ about the election,” says Guttesman, adding that while she leans democratic, a group of her friends wore Romney t-shirts to school and posted a steady stream of campaign comments on Twitter and Facebook. On that note, President Obama used Twitter as his first communication medium to claim re-election, and Obama and Romney had 33 million and 12 million Facebook fans, respectively. Malia and Sasha reportedly don’t have Facebook pages.

Interest in the issues – everything from the economy and foreign policy to a woman’s right to choose – fuels political awareness and involvement. Keya Dannenbaum, the founder and CEO of ElectNext, a website that matches voters with the most compatible candidates, says that teens should explore political topics, even before they reach voting age. “Being engaged, being able to make interesting, informed arguments and decisions based on the issues, can have an effect on what ends up happening,” says Dannenbaum. “You are able to talk to, and share your ideas with, the people who can vote. And when your turn comes, you are that much more ready because you have a history of participating.”

Lane Sutton, a sophomore at Framingham High School in Framingham, Mass., agrees that high school students can have an influential voice on issues that matter to them. Sutton, a passionate business advocate, has several political priorities. “I think that as a teenager, education is very important because we need to have low interest rates on student loans for college. We still need qualified teachers, but [also] more evolving curricula that teach innovation and more career-based courses or electives that focus in on technology and building off your skills,” he says. “Jobs are key because many college students are struggling to find jobs even after they finish college and get their degrees, while they are stuck in a pile of debt.”

“Making it easier and more accessible for people to have a higher education” is also top-of-mind for today’s youth, adds McCarley.

Rebecca Unger, a high school senior who also attends Quinsigamond Community College in Worcester, Mass., is pleased with the election’s outcome. “I was most concerned about health care, reproductive rights and the intersections thereof,” notes Unger, 17. “In that vein, I was relieved when Obama won. Obama is not perfect, but I was terrified by the prospect of Romney winning. I just kept imagining coming of age and going to college in a United States that resembles The Handmaid’s Tale [a Margaret Atwood work of science fiction that explores themes of women losing their rights].”

A Romney supporter, Sutton admits that he is on the other hand “a little frustrated” by Obama’s win. “I believe that we would have more progress with Romney because of his experience as a businessman,” notes Sutton. “I would like to think of the U.S. as a business because we need to increase our exports and lower our imports. Romney would encourage a ’Made in America’ grassroots strategy that can help to boost our economy and open trade with other countries. We need to be a leader like China is for manufacturing.”

Still, what frustrates Sutton most is the mindset of his peers, who he says take on the views of their parents or friends rather than formulating “their own thoughts.”  Raunaq Singh, a senior at Hightstown High School in East Windsor, N.J., agrees: “It’s rare to find a student who has separate opinions from those of their parents. I encounter many students who seem to have strong opinions, but a rather weak base of facts for them.” Research, notes Dannenbaum, indicates that “our political choices are handed down from generation to generation.” However, the 2008 campaign and election of Barack Obama changed all that, when high school and college students “convinced their parents to vote the way that they felt inspired.”

Whether Republican or Democrat, Romney or Obama, the voice of the Malia Generation is getting stronger. Many high school seniors turned 18 in time for this year’s election, and while a large number did not vote, others embraced this rite of passage. “I feel like I’m always complaining about what’s wrong with the world,” Di’Jahnay Stewart, a Dewey Academy student in Oakland, Calif., told her local newspaper, the Oakland Tribune. Stewart turned 18 on May 23 and registered to vote shortly thereafter. “I feel like if I vote, at least it’ll mean something.” Echoed classmate Dominique Dyer: “I feel proud of myself for voting.”

Soon, younger high school students’ votes will also count. “I am looking forward to it,” says Sutton, who is 15. “It is a big responsibility in the U.S., and I would like to have some say in the future of a world-leading country.” As for the candidates? “Politicians definitely over-promise, but I would like to see them become more honest with realistic goals on how they will reform the United States and help the citizens.”

Why should teens care about the issues? Do your opinions matter?

What issue or issues matter most to you? Why? What issue would you like to learn more about?

Do you agree with the statement, “Our political choices are handed down from generation to generation?” Is it possible for young people to have different views from their parents? How and why?