The Economy: When Will Happy Days Be Here Again?

Everyone has been feeling the effects of the “Great Recession,” a deeply troubled economy that began at the end of 2007 and has continued to impact the way we live through high unemployment rates, rising gas and food prices and other financial struggles. Latest reports show the U.S. recovery, which would lift the country out of these tough times, has faltered. When will the economy improve?…Read More 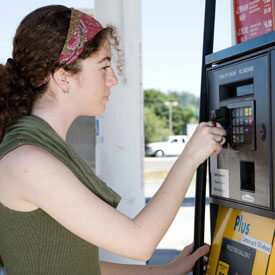 This week, thousands of high school students from across the country who are involved in the Future Business Leaders of America organization are gathering in Orlando, Fl. for the 2011 National Leadership Conference. Summer employment, high gas prices and other economic issues are fuel for much discussion amongst this group of business-minded teens who compete in a variety of areas, such as public speaking and job interviewing.

Kaitlyn Schoeffel, a recent graduate of Egg Harbor Township High School in New Jersey who is an FBLA intern at the Orlando conference, says she has been particularly watchful of economic trends during the rough economy of the past few years. “My mother is an entrepreneur and opened Ensemble Arts, a dance studio in Egg Harbor Township, in 2008,” notes Schoeffel, who will be attending Montclair State University in Montclair, N.J. in the fall. “It was very difficult to begin a business at such a challenging time in the economy. Over the past couple of years we have slowly and steadily seen improvement with student enrollment and the number of classes students are taking. I think that the trend is going in an upward direction.” Schoeffel adds that she and her friends have been dealing with high gas prices, which, at over $3 a gallon, “are strenuous on anyone.” She is using the tips she earns from her new job as a waitress at the Bashful Banana on the Ocean City boardwalk to help cover gas expenses.

Like Schoeffel, people everywhere are watching and waiting for happier economic times. The “Great Recession” in the U.S. economy began at the end of 2007, and has resulted in high unemployment rates, rising gas and food prices, a decline in home values and an increase in people filing for personal bankruptcy as they struggle to make ends meet. The latest reports show the U.S. recovery, which would lift the country out of these tough times, has faltered. But someday, surely, there will be a real economic recovery. What forces will drive that upturn?

Two intertwined factors are critical to any rebound, according to many experts: Home prices must stop declining and begin to rise, and consumers must spend more freely. In addition, exports must continue to grow and businesses and consumers must feel the government is making significant progress in resolving its deficit problems and clearing away regulatory uncertainty. Government efforts like stimulus spending and keeping interest rates low are not expected to be key factors in a recovery.

Given the many problems afflicting the economy, a vibrant recovery could be years away. The economy grew at an anemic 1.8% annual rate in the first quarter, down from 3.1% in the fourth quarter of 2010. Federal Reserve chairman Ben Bernanke recently offered little optimism for the immediate future, calling the recovery “uneven” and acknowledging that it is unlikely that the central bank can solve the economy’s woes by itself.

“It’s too soon to be talking about a return to a healthy economy; there is a long mid-range period in our future,” says Susan M. Wachter, a Wharton real estate professor, adding: “We are three, four, five years away from being back to what might be considered the ‘new normal.'” The key obstacle, she notes, is the real estate market — commercial and residential. “Construction is a job-intensive industry. It’s usually the sector, in terms of employment, that leads the job recovery, and that’s missing in action this time around. It makes the overall recovery far more vulnerable to other negatives.”

To have a vibrant recovery and economic expansion, housing has to go from “being a headwind to a tailwind,” according to Mark Zandi, chief economist and cofounder of Moody’s Economy.com. “It’s hard to get enthusiastic about the economy with house prices falling,” adds Wharton emeritus finance professor Marshall E. Blume. “The consumer has to feel that the economy is on the right track, and there are not many headlines saying it is on the right track right now. The consumer hears this and says, ‘I’ve got to be careful.'” With inflation taken into account, consumer spending has been virtually flat in recent months, and surveys show consumer confidence sagging.

While a real estate rebound and surge in consumer spending are essential to a recovery, other factors can play a role, says Zandi. There must be solid growth in emerging markets to drive U.S. exports, and it will help if the dollar falls in relation to emerging market currencies like the Chinese yuan, making American goods cheaper for foreigners. Also, he adds, U.S. businesses will have to spend more on workers and expansion — but that will not happen until they are confident that the country’s fiscal problems and regulatory uncertainties are being resolved.

While the government has worked to keep interest rates low and engaged in massive spending to stimulate the economy, none of those interviewed said new efforts of this type would be the key to an eventual recovery. “We have to rely on the private sector to increase its demand for workers,” says Wharton finance professor Richard Marston. “I believe employment will gradually improve, but I must admit that the process is disturbingly slow.”

5 Takeaways from Today’s Board Game Revival