South Sudan is the world's youngest country. When it broke from Sudan a few years back, many were hopeful that it would build a stronger economy. However, it is struggling. KWHS teen contributor Mats Terwiesch spoke with Eric Kacou, an expert on Africa, about the role of businesses and investors in helping the country rebound and find its way.…Read More 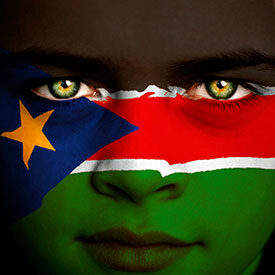 Mats Terwiesch, a KWHS summer ambassador and 2014 graduate of Harriton Senior High School in Wynnewood, Pa., recently interviewed Eric Kacou, co-founder of Entrepreneurial Solutions Partners in Washington, D.C. Raised in Cote d’Ivoire, West Africa, Kacou consults and invests across Africa and is especially passionate about finding solutions to poverty in Africa and the rest of the developing world.

Terwiesch, now a freshman studying economics at Bates College in Maine, spoke with Kacou about The Republic of South Sudan in northeastern Africa, the world’s youngest country that gained its independence from Sudan in 2011. Hopes were high at that time that South Sudan’s strong oil exports could help it build a modern economy and improve the quality of life for its citizens, who struggled to even survive. But according to a Reuters article published this week (see related links below), “Ethnic-fueled conflict has flared, oil money has been spirited away through corruption or squandered on war and a nation that sits on Sub-Saharan Africa’s third biggest reserves of crude is sliding towards famine.” On Thursday, China said it would send 700 troops to join a U.N. peacekeeping mission in South Sudan, where fighting has threatened Beijing’s oil investments. In this interview for KWHS, Terwiesch discusses some of South Sudan’s struggles with Kacou, who has spent time working in and exploring the region.

Below is an edited version of their conversation.

Knowledge@Wharton High School: I’m interested in South Sudan because it’s such a new country and there’s a lot happening every day, including some interesting conflicts with North Sudan. South Sudan has this potential for very rapid growth. How can businesses invest responsibly and ethically?

Kacou: I think that’s a very good question. And it’s a timely question because [in the past year] the president [there] demoted both the vice president and the whole of government. A lot of what we have seen happening in Southern Sudan is related to the lack of governance systems. That’s probably where businesses can be most helpful, which is to make sure that instead of taking advantage of the lack of governance and engaging in corrupt practices, they should [instead] uphold the same kinds of standards that they uphold everywhere else in the world. These are enshrined in documents such as the Foreign Corrupt Practices Act and other laws in developing countries, which clearly take a firm stand against corruption.

Southern Sudan is at the stage in its development where not all the institutions are in place. Therefore, it makes it very easy as an investor with the wrong set of values to take advantage of Southern Sudan, especially if they’re willing to pay bribes.

The second thing that [businesses] can do [involves] training people. One thing that comes with such a long civil war is that the country has a deficit in terms of trained people. What I mean by trained people is not just people with degrees, which you can find, but people with the practical experience to manage a company, to negotiate a deal, to put in place standards for exports. All these things are critical if the country is going to be able to add value to its natural resources and eventually create prosperity for its people. So, one of the things that investors can do is to make sure that they have very generous provisions in terms of building skills and training the Southern Sudanese.

Finally, I would advise all investors to take a long-term view. I believe that in environments such as South Sudan where the politics is difficult, it’s very easy for investors to look at things in a very short-term manner and engage in businesses that are less about investment and transformation and more about trading and exploitation. So, I would advise them to think very, very hard about the ways in which they can take a medium to long-term view if they are to contribute to the development of Southern Sudan.

KWHS: You mentioned that there is a lack of existing government support. How do you think the South Sudanese government can grow to facilitate responsible foreign investment?

Kacou: I think one thing that the government can do is to leverage the example of sister nations in the region that have gone through similar challenges. Some countries come to mind like Uganda and Rwanda. These are countries that not too long ago — especially Rwanda, less than 20 years ago — went through similar devastation. But they have managed quickly to put government systems in place that make sense. When the president of Rwanda visited South Sudan for the second anniversary of South Sudan’s liberation, he pledged government support from Rwanda. This kind of practical help can really make a difference.

If I were South Sudan, I would turn to countries that have gone through something similar not too long ago and try and learn [and implement changes] from their examples. Finally, I think it goes back to the leadership of South Sudan, as well — going back to the reason why they decided to basically fight for liberation [from Sudan]. In general, it was to make sure that the average person had a better life. In order to empower that [mission], they need to actually make it happen. I think it’s important that they don’t forget their own commitments, and go back to the rationale for why they did what they did.

KWHS: South Sudan is attracting so much Chinese investment. How will this affect local entrepreneurship in South Sudan?

Kacou: I think there is a bit of a fear around the role of China in African countries. I fundamentally believe that it is a fear that’s not always justified. People in Africa think, “Oh, the Chinese, they don’t apply the Western standards, or they come in with their own workers,” etc. These things are not really the problems of the Chinese. They have more to do with African leaders’ ability to decide what’s right for Africans.

I wouldn’t be worried that Chinese are investing in Southern Sudan [any more] than if U.S. companies were investing there. The sense I get, though, is that the government and leadership of Southern Sudan, both from the public sector and the private sector and civil society, have a responsibility to define the kind of engagement they want with their investors, whether they come from China, the U.S. or anywhere else [in the world].

For me, it’s less to do with the color of the investor. It’s more to do with clear guidelines and expectations from the leadership of [South Sudan] to deliver on what is right for the people.

KWHS: One of the problems South Sudan is facing is that, while it has vast oil reserves, the refineries and the shipping and the access to the ocean are all in Northern Sudan. Obviously, there’s some historical tension with Sudan, but cooperation might be necessary. How do you think this conflict will be resolved?

Kacou: There are conversations about having a pipeline that would go from Southern Sudan through Kenya, I believe. Putting in place such pipelines are major endeavors that cost a lot of money and take a lot of time. But the sense I’m getting is that there is definitely a drive from the president of Southern Sudan not to be dependent on Northern Sudan alone.

Kacou: The president of Northern Sudan has come to Southern Sudan. Sometimes they’re shaking hands, and then after that they’re fighting again. Fundamentally, there is an issue of distrust. You’re dealing with a relationship that dates back hundreds of years where basically the Arabs and the Libyan people haven’t quite managed to define how they live together as peers. Unless some of those deeper issues, which are rooted in history and related to trust, are addressed, it becomes very difficult to find any logical solutions.

The South Sudanese thought their independence from Sudan would mean a better life. What has prevented this from happening? What are some of the factors that are impeding the growth of the economy?

What does Eric Kacou mean when he says that fears of Chinese foreign investment have more to do with “African leaders’ ability to decide what’s right for Africans.”

What is sectarian violence and how is it affecting countries and economies around the world? As Kacou suggests, can these countries learn from countries like Rwanda?

Who is Eric Kacou? Research him, and explore his business practices.

Future of the Business World: Cabbage Rolls, Resilience and Our Place As Global Citizens

CEO David Pottruck on How to Be a Great Leader