Airtime, the newest startup from Internet business sensation Sean Parker, officially launched on June 5. Some see it as revolutionary; others, not so much. What do you think?…Read More 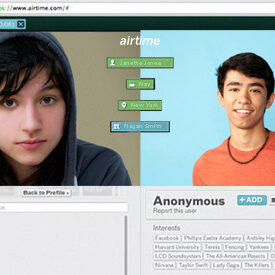 Love him or hate him, Sean Parker is not afraid to think big. The billionaire Facebook phenom — who at age 19 forever changed the record industry as the co-founder along with Shawn Fanning of the music-sharing site Napster and who also co-founded Spotify — was referred to recently in Forbes magazine as “an idea catalyst who, when combined with the right people, has fueled some of the most disruptive companies of the last two decades.” Added LinkedIn founder Reid Hoffman, Parker is a “big-ass visionary.”

So it was little wonder that the June 5 launch of Parker’s latest Internet endeavor, Airtime, created a buzz. The result of yet another collaboration with Fanning, Airtime leverages the so-called interest graph (an online representation of an individual’s interest with other people) and Facebook to connect you, via video chat, with people you do and don’t know. It’s an app that links your “likes” with others’ “likes” and gets potentially compatible people talking face-to-face, technologically speaking. Some have described it as “Chatroulette without the nudity,” referring to an open video network that quickly became a forum for indecent behavior.

It’s All in the Discovery

Airtime is also a way to meet new people – and discover common interests in real time. The platform launches instant video conversations with random, like-minded people. An Airtime screenshot shows your video feed and the other person’s video feed, YouTube videos that both of you have posted to Facebook and all of your “likes” and the other person’s “likes.” Common “likes” appear in bold lettering. That compatibility approach is what sets the technology apart from other video chat platforms, such as Skype and Facebook Video.

“If you look at Facebook, Twitter, they’re all social networks, but there is an intended path of use,” notes Gregory Hosono, chief operating officer of Teens in Tech Labs, a Mountain View, Calif. company that provides tools and resources to young people to help encourage entrepreneurship at a young age. The Teens in Tech blog, which Hosono edited for a year before handing over the reigns this month, follows entrepreneurs and technologies that are “innovative and cool.” Anything Sean Parker does definitely qualifies. “The theory behind Airtime is that if you have similar likes to someone else, you will have a conversation with them and maybe become friends with them. I have used Airtime to chat with friends to see how the interface works, and I like it a lot,” adds Hosono, 16 and a rising junior at Phillips Academy in Andover, Mass. “It’s cool to be able to look at a friend and say, ‘I never knew that you liked that.’ The discovery part is completely different [from] anything else.”

Airtime is hanging its hopes, in part, on the rising popularity of video chat among teens like Stennett and Hosono — who says that the medium is a great way to stay in touch with his boarding school buddies in the U.S. and abroad. A recent report by the Pew Research Center’s Internet and American Life Project found that about 37% of Internet users ages 12 to 17 participate in video chats, using platforms like Skype, Googletalk or iChat. “There’s something exciting about bringing spontaneity to the Internet,” Parker said in a statement. “As we move from a social graph [the connections between people who use social networking] to an interest graph, there are great possibilities for our world. That’s what we’re trying to tap into with Airtime.”

But not everyone is convinced that it is the next big idea. Daniel Brusilovsky, founder and CEO of Teens in Tech Labs who says he will soon join venture capital firm Highland Capital Partners as a summer associate with its Internet and digital media investment team, believes that Airtime falls a bit flat. “To be perfectly honest, there’s a part of me that expected more,” says Brusilovsky, who is 19. “I think they tried to do Chatroulette better. There are companies like SpaceX [a space transport company founded by entrepreneur Elon Musk that in May 2012 became the first privately held company to send cargo to the International Space Station] that are true innovators. Sean Parker and Shawn Fanning are two of the smartest people in our industry. With their brainpower and connections, it should be a bigger idea and a bigger underlying mission — something that is going to change the world. The product is beautiful, and it works great. Was I expecting something more? Absolutely.”

With a launch on June 5 that was marred by technological glitches, you can bet that the world is watching Airtime’s progress. The company has funding from some big-name financial backers, including Kleiner Perkins Caulfield & Byers, Accel Partners, Google Ventures, Andreessen Horowitz and Social + Capital. Some are speculating that Airtime will “re-humanize” the Internet with a depth of communication that has yet to be experienced in social networking. “Whether you’re chatting with a friend or someone new, Airtime lets you leapfrog forward in the intimacy of your relationship,” writes TechCrunch reporter Josh Constine. “Suddenly strangers don’t seem so strange, you realize how much you have in common with your co-workers, and friendships are accelerated. Airtime makes it seem like you’ve known someone longer than you have.” Revolutionary? You decide.

What does it mean to be an “idea catalyst,” and why is that so valuable in today’s business world?

What is an interest graph? A social graph?

How do you think Airtime might “re-humanize” the Internet?

TechCrunch: How Airtime Will Re-Humanize the Internet

Bloomberg Businessweek: The Men of Airtime, Looking for Love