Since the age of 15, Eiso Kant has been a serial entrepreneur, most notably founding Twollars in 2009, the first virtual currency company on Twitter, which raises money online for charities. He talks with Knowledge@Wharton High School about his critical choice to pursue college over full-time entrepreneurship and how and why he finds time for his latest entrepreneurial endeavor. …Read More 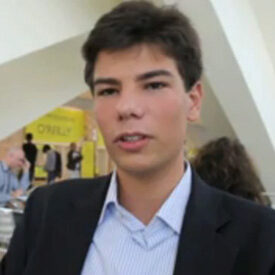 Eiso Kant is a 21-year-old entrepreneur from Holland who attended international schools since the age of 10. At 15, he created his first start-up, PrimaPrints. Since then, his most high-profile entrepreneurial success has been Twollars. Launched in early 2009, Twollars was the first virtual currency company on Twitter, and uses virtual currencies to raise money for charities. Currently, Kant studies at Instituto de Empresa (IE) University in Madrid, Spain. He spoke to Knowledge@Wharton High School about entrepreneurship and the value of trusting your intuition.

Knowledge@Wharton High School: Tell us about your first experience as an entrepreneur.

Eiso Kant: I was 15 years old, and in my high school we had this project that we could do whatever we wanted during six months as long as it was a serious project. A friend owned a store that sold classic prints, very old 18th and 19th century art pieces. He was going to close the store because he wasn’t selling enough, and at that time selling on the Internet was becoming popular. I asked him if, as part of my project, I could sell his prints online. He agreed, so I spent about six months building a website, learning web design, programming and so on. I even shot photos of thousands of prints with my camera to upload them onto the homepage.

After six months, I realized I made a mistake because even though I had created the website, no one was going to visit it. I was lucky because one of my first few customers suggested that I sell the prints on eBay. The next day I put the prints on eBay and everything was sold to a collector in Australia. I realized that I spent six months building an online store, learning to design, all these things that were not necessary because I could have [started out] putting everything on eBay.

Kant: I learned a lot of skills along the way, [like] web design. I liked the fact that even if you are very young, you can start your own business. If it is something online, age doesn’t matter. I started [wanting] to [become an entrepreneur]. The first experience was definitely the trigger. After that, I started getting involved in more difficult projects. For example, I did a large publishing project for a major publisher in Europe, where we ran 14,000 site content networks and had a team of 23 freelancers working full time. That was my first experience with a team, and it taught me how to deal with corporate clients.

KWHS: What other businesses did you get involved in?

Kant: After that, I finished my high school degree. I then founded a company called Twollars, [which raises] money online for charities by using social media, especially Twitter. We allow companies and trustees to raise funds for different charities. We signed on over 300 charities, such as Livestrong and Red Cross, from over 30 countries, and the company itself was very successful in terms of traffic [and] getting media attention in [publications like] The Guardian and Businessweek. After a year of doing this, I had to decide [whether] to continue the business and accept several investors (from the U.S.) who were interested in the project. The requirement was that I stay in the company and not go to a university.

I ended up not doing that deal because I wanted to study in Europe, and at the same time, I didn’t want to skip ahead too quickly. I guided myself by intuition, which has always played a big role in all my business decisions. Even if it was something that on paper seemed very profitable or like the pot of gold at the end of the rainbow, if it was something that intuitively didn’t feel right, I wasn’t going to go for it. With Twollars, I spent a lot of time in the U.S. in [cities like] San Francisco and Chicago. It was a very hectic time, but it was a good experience because it taught me a lot about being careful in business, and not [believing] the hype and media. Sometimes it is better to try and build a more sustainable company rather than a company that is being featured in all the big publications. I have been very lucky to find great people around me who have been able to give me the advice and the support I needed.

KWHS: What differences have you experienced between working in the U.S. and in Europe?

Kant: I think you can meet more people in the U.S. than in Europe because entrepreneurs are more centralized in the U.S. in [places like] Silicon Valley. But I love European culture. I enjoy the way we build relationships here with people — we spend a lot of time getting to know each other. So for me, making the decision to go to Spain, to Europe, to study at the university had a lot to do with enjoying the [European] attitude. But Europe is a more difficult place for doing business.

KWHS: How difficult has it been it for someone your age to do business?

Kant: The funny part was that my age was more often an advantage than a disadvantage because more experienced people were willing to talk to someone young and to listen to what I had to say. Also, people thought that I was older than I looked, so when I was 15, people thought I was at least 18. That helped to some extent to be taken more seriously on a first impression. But I think in the U.S. people are more available, more willing to help each other.

KWHS: Are you involved in any business projects right now?

Kant: I am one of the founders of a company called Tyba, a part-time project [that I have been doing] for a year during my second year at IE. We have set up a very basic business model. We approach universities and business schools in western Europe with a basic notion: When your students are being Googled by recruiters, what they are finding right now is a Facebook page, but nothing that shows the personality of your students or an impression beyond a Curriculum Vitae (CV or résumé). So we build individual websites for students that, at the end of the process, reflect their personalities as well as [provide] CVs for employers. We talked to many service career directors at universities for a year and saw a great potential for moving forward with this. We opened an office in Madrid in 2011.

KWHS: You are doing all of this while going to IE. What would you recommend for someone who wants to start a company while attending high school and later go on to a university?

Kant: What allows you to do all these things in high school or at any point in your life is to find something that you are passionate about. If that is the case, you’ll find a way to make a schedule work. My high school grades were not as good as if I had been focused full time on it, but I definitely recommend going to university. It is a valuable experience because it is the only time when you are going to [spend] three or four years with one group of people, and you are going to become very close. You are going to build relationships with them [that last a lifetime]. Two of the people who cofounded Tyba with me are from my university. I would also recommend, no matter what age, to hold yourself to high standards of integrity, do things right and if you mess up, admit it.