Lots of people laughed through the 2013 comedy Identity Thief, in which Melissa McCarthy plays a character who steals Jason Bateman’s identity and proceeds to go on a spending spree, buying everything from jewelry to a jet ski. All joking aside, identity theft is on the rise, especially targeting young people who tend to overshare when using technology and on social media. KWHS explores identity theft – it’s definition, increase, and even one young entrepreneur’s app to help prevent your personal information from falling into the wrong hands. …Read More 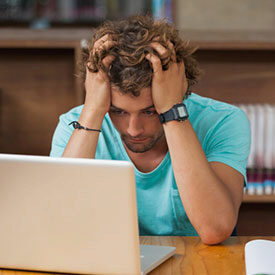 Freshman year of college was barely underway when the unthinkable happened to Andrew Royce Bauer: his personal information fell into the wrong hands. “Someone took my [wallet]. I never found out who it was, but I ended up losing about $3,000,” says Bauer, 20, who is now in the last year of his studies at the University of North Carolina at Chapel Hill. “I think it was because I lived in a dorm room that was close to so many people, and you’re definitely really vulnerable to identity theft … [by] college kids who are on a budget. They have the incentive to want to take and steal from their fellow college students.”

A Wallet with GPS Tracking

Bauer is one of many young adults who have been victims of identity theft, which is when someone steals your personal information like your name, credit card number or Social Security number, assumes your identity, and then uses it to make purchases, obtain credit and commit other types of fraud. Maybe you heard about the teens in California this month who used a stolen credit card number to rent a sports car and a $12 million vacation home. Identity Theft tops the Consumer Sentinel Network’s list of consumer complaints. CSN is a secure online database of millions of consumer complaints received by the Federal Trade Commission and state law enforcement agencies. During 2013, people 19 years and under filed 6% of identity theft complaints and individuals aged 20 to 29 filed the most complaints (20%), according to CSN. Identity theft experts say teens are being victimized online and offline by strangers and even people they know.

The theft of Bauer’s identity had a lasting impact on his life—in more ways than one. He says that it was very time consuming to cancel his debit and credit cards, as well as renew his insurance and license. But out of that adversity, he came up with the idea for the Freedom Wallet, which has GPS tracking and RFID blocking technology to help prevent people with wireless scanners from stealing information from cards in the wallet. RFID (radio frequency identification) tags transmit data and have many uses, including financial transactions.

The Freedom Wallet is manufactured by Bauer’s family business, Royce Leather, and is sold through Brookstone, Sharper Image, Kohl’s, Walmart and other retailers. The wallet uses an app on your phone to keep tabs on it. If your wallet goes outside of a 150-foot radius of your phone, you receive an alert. The app also uses crowd GPS, which allows you to alert other Freedom Wallet users that your wallet has been taken, just in case they are in proximity of the thief. “If I had had the Freedom Wallet at the time, my phone would have alerted me once the wallet went outside the 150-foot radius, and I would have been able to catch the person. But it was an unfortunate case where the person took my wallet and was able to cash out all my credit cards,” Bauer says.

Bauer, who became CEO of the Secaucus, N.J.-based Royce Leather last year, splits his time between his studies at UNC and running the family business, which he says is integrating technology into more leather goods to prevent thefts.

While Bauer’s company is using technology as an anti-theft measure, technology has become the tool of choice for many identity thieves. For example, social media and even video games are to blame for why the number of teens and minors having their identity stolen today is at an all-time high, says Alexis Moore, founder of the victim advocacy organization Survivors in Action and co-author of Cyber Self-Defense: Expert Advice to Avoid Predators, Identity Theft, & Cyberbullying, which will be published in October. “It’s something we’ve never seen because before the digital age, it was not as likely to happen,” notes Moore.

Moore says teens are targeted because they overshare through social networks and file sharing, as well as through cell phones. They often reveal personal details such as their birthday; city or names of parents, siblings and pets, which help thieves gain access to passwords. A lot of times people finding teens on social networks are adults posing as kids, Moore says.

Online video gaming is another way that thieves get access to kids and teens. More than half of American households play video games, and individuals 18 or under make up 29% of the game-playing population, according to the Entertainment Software Association. Other thefts of information occur through cyber attacks, such as the one that recently affected as many as 145 million eBay users.

Another disturbing trend: the identity thief just might be Mom or Dad. Moore says the number of parents stealing their kids’ identities has jumped in recent years. “Since the crash in the real estate market and everyone’s lost their credit, they’re so desperate, she says. “They can’t rent an apartment, they can’t get a job and they think they’re totally finished, so they [decide to] use their kid’s credit profile.”

Often these thefts go undetected for years until teens or young adults need a background check for employment, to rent an apartment or get a loan, says Mike Coffey, president of Fort Worth-based Imperative Information Group, which provides background checks for organizations. “We’ll often pull a credit report and see…the kids name with a lot of addresses that go back to when they were 12 or 13, and so the parents were using that Social Security number to open an account,” says Coffey.

He says that in some cases it isn’t until the teen calls credit card companies or other accounts listed on the report and an investigation is begun that they figure out it was a parent or other family member using their identity. Many times teens don’t report thefts by family members to authorities.

Regardless of who stole your identity, Moore recommends that teens immediately contact the three major credit reporting agencies (Experian, Transition and Equifax) to place a fraud alert on your credit report to keep new accounts from being opened. Order your free annual credit reports online at www.annualcreditreport.com or by calling (877) 322-8228.

Victims should also attach a consumer statement to their reports that details the identity theft. Moore’s website (listed in the related links section) offers several tools to help identity theft victims clean up the mess.

Moore and other identity theft experts suggest that you are proactive about protecting your identity before becoming a victim and having to deal with the fallout for years. Here are a few of the steps that the Federal Trade Commission recommends taking:

Identity theft can hurt you in more ways than just your bank account. Credit.com points out that employers now routinely look at credit history when assessing job candidates. Yet another reason to protect your personal information, both online and off.

How did becoming a victim of identity theft inspire student Andrew Royce Bauer?

This article lists a few ways you can safeguard against identity theft. Research and report on three others ways by visiting the Federal Trade Commission link mentioned below.

Have you ever been a victim of identity theft? If so, how did it happen and what did you learn?

Future of the Business World: Cool Sneakers and ‘Creative Destruction’ with Jiro Noor