Sure, politics is at the heart of the U.S. government shutdown – but so is money. With the help of some high school student insiders, KWHS explores financial lessons inherent in the ongoing Washington debate. …Read More 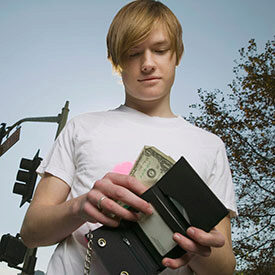 The news out of Washington, D.C., today is the most optimistic in more than two weeks since the partial shutdown of the U.S. government that began on October 1. Senate Majority Leader Harry Reid said that Republicans and Democrats, who have not been able to agree on a spending plan for the new fiscal year due to opposing beliefs about the nation’s health care reform known as Obamacare, were close to a deal to end the shutdown and avoid a debt default, which would kick in on October 17.

Does it all sound so … financial? That’s because it is. Congress’s main job is to pass spending bills to fund the government. And when it doesn’t do that – as in the case of this shutdown – the money to pay loans, fund agencies and even pay hundreds of thousands of government workers is just not there. Add to that the whole looming debt ceiling issue (more on this in a minute), and you’ve got major cash flow problems.

With so much money – or lack thereof – in the spotlight, so too are countless opportunities to learn important financial lessons. With the help of some high school students who have been personally affected by the national events, KWHS explores four financial insights from U.S. Government Shutdown 2013.

Save It For a Rainy Day. Casey Fries, 17, is a junior at Avon High School in Avon, Ohio. Her stepdad Anthony Danicki, an engineer with the U.S. Coast Guard, was furloughed at the start of the shutdown, which means he is not being paid. Furloughed workers will eventually receive their back pay, but not until well past the end of the shutdown. Meanwhile, bills pile up. While Fries says that it has been nice having her stepdad home more, it has also been unsettling for her family, including her four younger siblings and stay-at-home mom. “It’s kind of scary, because I don’t know when they’re going to get their next paycheck,” says Fries, who wants to be a journalist. “We worry about paying bills for our house and for food. I have many siblings, and we go through a lot of groceries. We can’t do family activities because we don’t have the money.” This sudden lack of income has left a lasting impression on how Fries views finances. “You can’t control where you are financially when something like this happens,” she notes. “You should always be prepared with emergency funds and set more aside to have money when unexpected things like this happen.”

The Language of Dollars and Cents. Let’s face it, without some basic knowledge of personal finance, all those clever Upworthy videos, FB posts and Twitter feeds of the past few weeks about the government shutdown are meaningless. Money makes the world go ‘round, and it has a language of its own. You no doubt heard talk of the budget and fiscal health, not to mention debt. Understanding these terms makes you that much more informed about your own financial future, as well as about how the world works. Fundamental knowledge of how credit works, for instance, will help you understand the deadline for debt default on October 17, which is a separate issue from the spending debate that caused the shutdown, but is equally critical to the country’s financial future. CNN describes it like this: “Remember that time when you maxed out your credit card? That’s what the debt limit is all about. The U.S. is on the verge of maxing out its $16.699 trillion credit card. And the President must ask Congress to raise the country’s credit limit.”

Accountants Aren’t the Only Ones Who Deal with Money. The government shutdown has brought to light different careers that relate to money, from furloughed loan officers who approve funds to help small businesses to employees who review disability claims for the Social Security Administration. The latter, for instance, makes sure that no one is taking advantage of the system that pays out benefits for the disabled, while at the same time ensuring that people with legitimate medical problems are compensated properly. Billions of dollars are at stake with that kind of work.

Matt Kickenson, 16 and a senior at Montgomery Blair High School in Silver Spring, Md., is used to exploring cool money-related careers at the dinner table. His mom, Kathy Michels, works at the U.S. National Institutes of Health’s Fogarty International Center, which advances science for global health. “My mom’s job is to give grants [money that, unlike a loan, does not need to be paid back] to medical researchers around the world,” notes Kickenson, who adds that she has been “frustrated” by her furlough as a result of the shutdown. Mostly, he says, she misses her work. “She likes to help the people she gives grants to, and she knows them personally because she travels to Third World countries and visits them.” Meanwhile, Kickenson’s dad, Jerry Kickenson, is still on the payroll for a private IT company that works directly with the U.S. government. “My dad does cyberdefense for money transfers [involving] big banks around the world. He does work for many different governments to help protect the money that is moved around.”

When It Comes to Finances, Just Breathe – and Learn. One of the more moving stories to emerge from the countless shutdown-related headlines of the past few weeks was that of federal defense worker Rob Merritt. Due to medical bills after heart surgery, he was already struggling to support his family of six and feared that an expected furlough would force him into bankruptcy. He no doubt had many sleepless nights. Money can cause stress and anxiety, which makes it all the more important to build a foundation of sound financial skills and strategies that include knowing how to earn, budget and save.

Adeline Wickerham, 14, better understands the emotional impact of money these days. “My father Todd is one of the head executive officers in the Cleveland branch of the FBI,” notes Wickerham, who is a freshman at Hudson High School in Hudson, Ohio. “He’s not getting paid, and that makes me feel nervous. Also, my dad works so hard to maintain peace and deliver justice in the area where I live. I feel he deserves better than this… ” Still, Wickerham says she has some valuable takeaways from this experience, however stressful. “My mom has a job – she’s a teacher – but my dad is the main breadwinner for the family. [The shutdown has made me realize] that I am very fortunate that my father has such a good job so he is able to provide for our family. It makes me want to have a steady, financial income when I get older so I can take care of things. [tweetthis alt=”” hashtag=”” url=””]In a situation like this, it shows that you always have to be careful about what you do with money. Be ready for anything.[/tweetthis] If I knew there was a set point when he would be getting paid again, then I could be more at ease. But as of now, it’s hard to know.”

After reading this article, how do you define financial literacy? Why is it important to understand money and personal finances?

Do you know someone personally affected by the government shutdown? What financial lessons come out of his or her situation?

Do you agree that money and worry often go hand-in-hand? Why is this? Describe a personal situation related to money and how it was resolved. What are some ways that you can be sure to stay in control of your financial future?