Do you have your own bank account? If you do, or if you’re thinking about opening one, you are no doubt on a path to financial fitness. Bank accounts help you save and budget your money and, more importantly, they help illustrate a fundamental financial concept: You can only spend the money you’ve got.…Read More 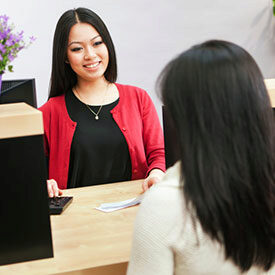 Parks, a senior at Trinity Christian Academy in Addison, Tex., says the bank account accompanied the license because his parents knew he would need “freedom on the road.” But along with learning how to parallel park and merge onto a busy expressway came some important lessons on budgeting and keeping his spending within his limits. “There’s been some months where I had to wait until just the other side of the month so I could fill up my tank with gas,” says Parks. “It was daunting; I was afraid I’d run out on the side of the road.”

Spend What You’ve Got

Parks learned an early financial lesson, and one that experts say is important: You can only spend the money you’ve got. For teenagers who have a bank account, it’s a concept that, if learned early, can pay off big time throughout their lives. “[Having a bank account] starts great financial habits and spending plans early,” says Dallas-area parent and lawyer Pam Hardison. [tweetthis alt=”” hashtag=”” url=””]“Teens realize they can be the boss of their own money.[/tweetthis] They can learn to watch where their money goes and realize that the extra gourmet coffee or movie might be money that’s better spent next month.”

Opening an account means learning to navigate the banking system. There are two basic types of bank accounts: savings and checking. Typically, checking accounts are used for money that will pay routine expenses — think rent, gas and food — and savings accounts are used to sock away money for a specific goal or in case of a financial emergency. You can write checks against a checking account, and savings accounts typically earn interest, which means that the bank pays you interest on the money held in the account. While savings accounts have relatively low interest rates compared to other types of investments, they do give you easy access to your money.

Although the debit card is a big draw for teens who open bank accounts, it is also one of the easiest ways to make a financial misstep. That’s why banking and budgeting is a big part of the curriculum at Survivor U, a financial education course started by Hardison, entrepreneur Leslie Clayton and businesswoman Holly Powers. The course is taught at Trinity Christian Academy, where Parks goes to high school, during study halls and in the summer, and covers topics like banking, taxes and investing.

The three Survivor U founders all agree that having a bank account in high school is a great opportunity for students and a great responsibility as well. It is a step that teens should take with their parents: Not only does anyone under 18 need to have a parent’s name on the account for legal reasons, but teens should be getting some guidance during their first banking experiences, especially in areas like budgeting and tracking expenses. [tweetthis alt=”” hashtag=”” url=””]“If you don’t have a spending plan, your money floats away,” notes Powers. “It’s like popping popcorn without the top on the pan – it just flies everywhere.”[/tweetthis]

Before opening an account, you should do some research. Find a bank that is close to your home, school or work, or otherwise convenient for you to get to. Check for accounts that don’t require a high balance — the amount you plan to keep in the account — to open, and look for the option with the fewest fees. Credit unions are essentially the same as banks, although they’re usually available only to members of a certain population – people who work at a company or live in a specific town, for example.

Here are some basic steps you will take when you decide where you want an account – but remember, anyone who’s younger than 18 will need to do all of this with a parent or guardian.

Frequent checks of your bank account balances serve another important purpose: catching fraud. About $3.56 billion was lost to debit and credit card fraud in the United States alone in 2010, according to The Nilson Report, which covers the electronic payment industry. The easiest way to catch financial criminals in the act is to monitor bank transactions online so the fraudulent ones can be caught and reported to police.

Credit cards usually limit the financial damage that’s done to cardholders in cases of fraud, but with debit cards, those protections aren’t always in place, notes Clayton. [tweetthis alt=”” hashtag=”” url=””]“Every bank account is different, so it’s important to talk about the differences,”[/tweetthis] she adds.

The easiest way to avoid fraud is to be smart about your account numbers, PINs and your banking passwords. Bank employees should never ask you for that information, either online or over the phone, so don’t ever give it out, Walker says. “If someone’s asking for that, be aware you’re likely talking to a fraudster.”

What are savings and checking accounts, and how do they differ?

How can opening a bank account help you learn to budget? Why is this important, especially if you use a debit card?

What is the easiest way to avoid banking fraud? Have you experienced financial fraud or identity theft of any kind? If so, how did it go down and what steps did you take to better protect your money?

4 comments on “Opening a Bank Account: Be the Boss of Your Own Money”